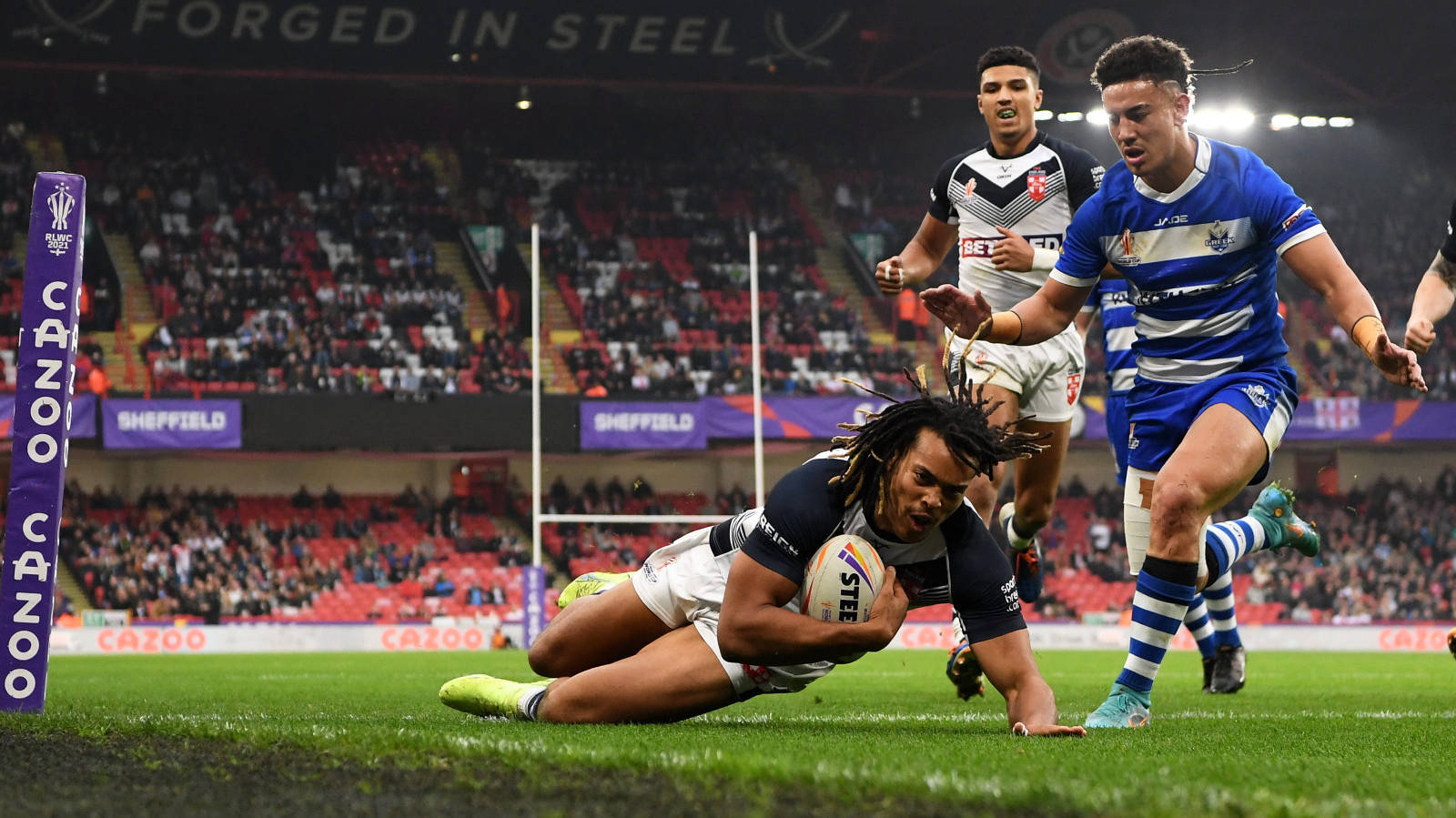 Dom Young underlined his status as England’s golden boy at this World Cup with a stunning four-try first-half display in the hosts’ 94-4 demolition of Greece.

Shaun Wane’s side had already qualified for the quarter-finals and are likely to face Papua New Guinea in Wigan on Saturday for a spot in the last four.

This record triumph saw them top Group A and finish a World Cup group stage unbeaten for the first time since 1995.

England smashed their previous biggest World Cup win, a 76-4 triumph over Russia in 2000, running in 17 tries in total with eight in the first period.

After the break, Tommy Makinson and player of the match Marc Sneyd dotted down before Burgess and Hall completed their doubles as Joe Batchelor and Kai Pearce-Paul marked their debuts with tries.

Andy Ackers scampered over for two late on before Young, who doubled his tournament tally to eight to lead the overall standings, brought the curtain down as he turned provider for Mike McMeeken.

England got motoring instantly as Sneyd’s well-timed short ball at the line sent the onrushing Lees over inside three minutes.

Jack Welsby, starting at centre, jinked left then right from a scrum before shovelling the ball out to John Bateman whose netball-style pass, which looked like it had drifted forward, found Young who scored England’s second and his fifth of the tournament in the corner.

However, the spirited Titans hit back when teenage full-back Taukamo’s one-handed catch caught England new boy Pearce-Paul in no man’s land and allowed him to race in to shock the hosts.

England’s riposte came on the right edge in the 25th minute as captain Williams’ floated miss-pass found Young who had the easiest of touch downs to become the competition’s joint top try-scorer.

Sneyd’s touchline conversion widened the gap to 16-4 as Wane’s men finally began to rack up the points expected of them.

Then the Salford pivot’s superb vision and early kick caught Greece out of position and allowed Hall to collect and barge over.

Burgess made an obvious impact from the interchange bench and there was no stopping him from close range after he gathered Williams’ inside ball.

Young completed his hat-trick after 35 minutes, the 6ft 7in, 17-stone phenomenon using his strength to run over the top of Taukamo.

And he soon had his fourth as England’s lead runners sucked in the weary Greece defence, allowing Pearce-Paul to draw and give to his close mate.

There was still time for skipper Williams, deputising for the rested Sam Tomkins, to race under the posts after Chris Hill’s break, Sneyd’s sixth successful conversion of the half making it 44-4 at the interval.

England’s half-century came just two minutes into the second half as the bouncing ball did for Greece, allowing full-back Makinson to pounce.

Williams’ lung-busting run from under his own posts to just shy of halfway laid the platform for Bateman to feed Sneyd for England’s tenth try, making it 56-4.

Young shook off an injury scare in the 53rd minute before Sneyd popped to Burgess for the simplest of second scores.

Debutant Batchelor butchered a two-on-one that would have given Hall another try but the Hull KR man wasn’t to be denied for long as he gratefully collected Sneyd’s cut-out ball to register his 14th try in 12 appearances at the Rugby League World Cup, leaving him two shy of Billy Slater’s record.

Batchelor made his first cap a memorable one with a try of his own before Ackers joined the party with a show-and-go from dummy half.

Londoner Pearce-Paul also bagged one to mark his first England appearance to take England into the 80s before Ackers’ support play got him another.

Fittingly, Young had the last say as his superb offload back inside allowed replacement McMeeken to run in as England hit their free-scoring best form ahead of the last eight.