Can you introduce yourself and tell us about your rugby journey?

My name is Franciny Amaral, I am 27 years old, and I have been playing rugby for nine years. Currently I play professionally at the Melina Rugby Club, training twice a day, five times a week.

My trajectory in rugby was amazing and I would not do it any differently. I started playing because my sister Beatriz introduced it to me. We started playing sevens for Curitiba where we won the Brazilian championship in 2015 and 2016.

There were times where it was very difficult for me mentally and I did not feel prepared. When I was 20, I had to move to another city. I dropped out of college and dedicated myself to the sport over family and friends. There were moments when I felt lost, and I had to face my fears. A month before the Olympics in Rio de Janeiro, I was cut from the first team. I had to go back to my city and go back to having a normal person's routine. I continued playing at my club, but in 2018 I had my first serious injury, and I was away from the sport for five long months.

At the end of 2019, I had the pleasure of going to a camp in New Zealand with the Brazilian team. On this trip I met my wife Byanca who also played for the Brazilian national team. Then came the pandemic. Everything closed and stopped in the country. There was only one club that kept working, Melina, where they had an incredible training centre in Cuiabá. The city is 38 degrees on a normal day and it was difficult to get used to the temperature, but it was the best way to keep training and living. We had hard training and many indoor games and we were isolated in a group of 30 people, challenging ourselves and learning.

In 2022 I had the pleasure of playing again with my sister and my wife when we moved to Portugal for a brief season with the Lisbon team, Sporting Rugby Club, where we were national champions.

During all these changes in the last two years, rugby league came into my life. Melina decided to participate in a national rugby league competition in 2021, and we were champions two years in a row. I have always been focused on the main objective, which was to go to the Rugby League World Cup and now that dream has come true!

I cannot help but remember the people who have always been by my side on this trajectory, which were my parents, my family, my psychologist, and my friends! I hope to continue living rugby intensely in every way possible! Because happiness is having a boot on your foot and running after an oval ball.

What did you try to show with the photos? Was there any wider meaning with any of the photos?

The photos were taken at my current club, Melina, and they show my teammates and friends. I tried to show our routine as athletes, the dedication we need to impose every day, and the unity that a team needs to go further.

There is a photo of the posts with the sunset. A late afternoon on a rugby field always brings me the feelings of gratitude and satisfaction. I love this sport and everything it has taught me and teaches me daily.

You can also see my life partner next to me. My wife Byanca teaches me every day and shares many laughs, loves, pains and difficulties of being a rugby player. 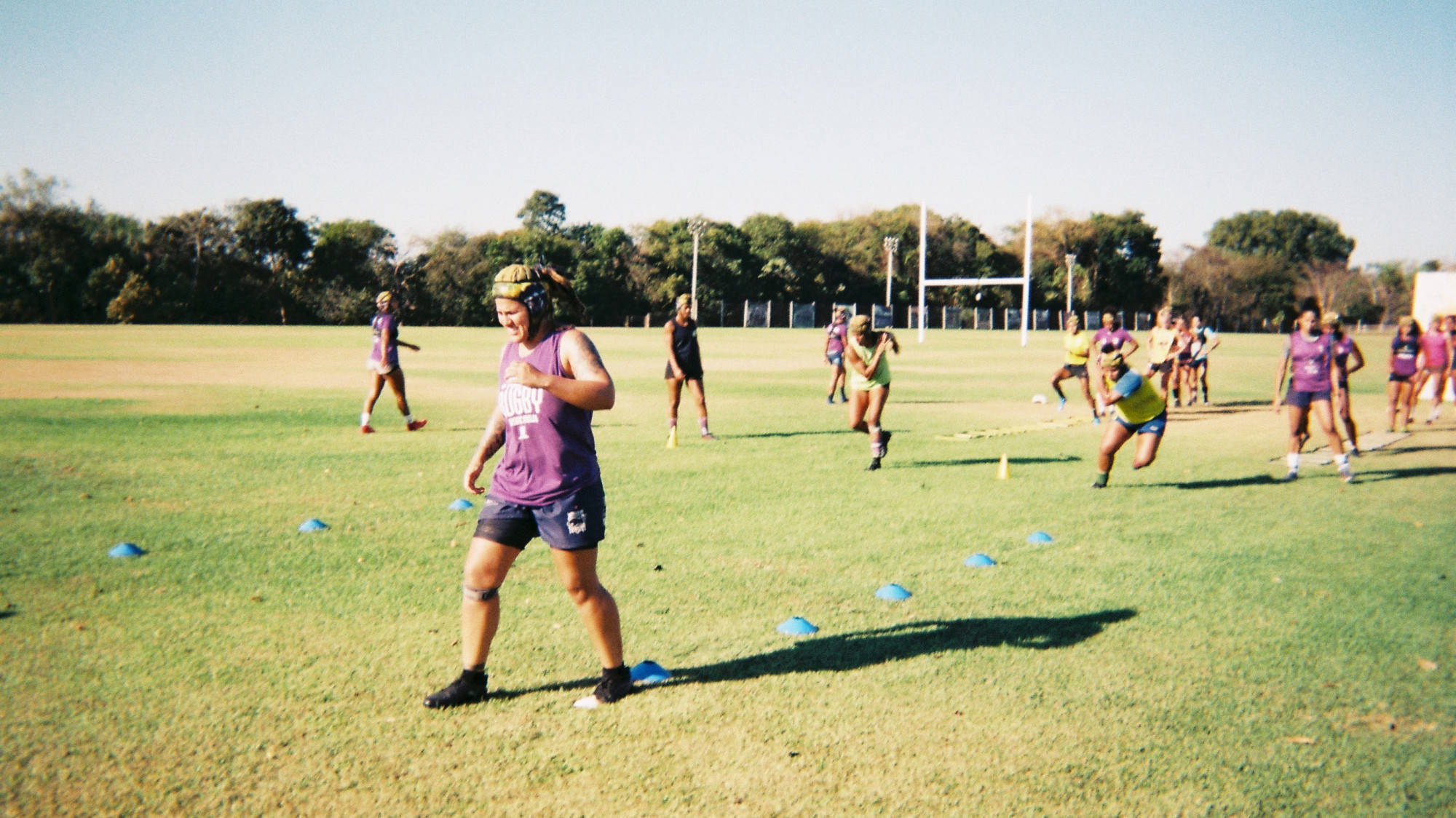 What does rugby league and playing for Brazil mean to you?

Playing rugby represents who I am, my values, sacrifices and overcoming challenges. Representing my country is a huge personal satisfaction, it is the best feeling that I could feel as an athlete. I am proud of who I am and where I came from. In the future I want to be able to play at the highest level of rugby league and represent my country in new challenges.

Some moments are very difficult and challenging, but we only find the way out within ourselves. I always encourage everyone to do their best with what they have today.

What are the biggest changes happening at the moment in women's rugby league? What do you expect to change after the RLWC?

There is greater visibility, and the number of participating women is rising. The best results in the country are coming from our Brazilian sevens team and from the women’s rugby league team.

Although we have good results internationally (we have won the the South American Championship 21 times and are Rugby League World Cup participants), our sport is still not disseminated in all regions of our country. Unfortunately, not every woman has the same opportunity as the game is concentrated in the South and Southeast.

I would like rugby to reach other regions of the country, giving all women the opportunity to get to know the sport. We need representative organisations dedicated to making this dissemination happen. I hope that with our participation in the RLWC our representatives will see that we need everyone's strength!