Can you introduce yourself and tell us about your current rugby life?

My name is Chantelle Schofield, but everyone calls me Channy. Growing up in the Cook Islands we never had rugby league, rugby union, or any contact sports for girls and women. I did not start playing rugby league until 2017 in New Zealand, so I was quite old when I first started.

In New Zealand I currently play club rugby league for Marist Saints, rugby union for Eden RFC, and in the Farah Palmer Cup for North Harbour.

What has been your rugby journey up until now?

I could probably write a whole book. Growing up on the beautiful tiny island of Aitutaki, girls were never seen as masculine. Women have gorgeous long hair, tan kissed skin and are graceful. They raise the children while also working themselves and do not play rugby.

I started playing after being invited by a friend. Coming from an environment where I have never touched a rugby ball and have never once been tackled was a huge culture shock. I remember showing up to my first training session in New Zealand. I had no boots. Kids on the Cook Islands never wore shoes and rugby was always barefoot, so I did not know that it was a normal and compulsory thing to wear boots in New Zealand when playing. I was lucky that my coach let me wear her boots and she let me keep them as well!

My dad, who did not like me playing, was still supportive and sent me money to buy some boots because I told him how much I loved it. Playing in New Zealand was different, sore, intense, and just amazing.

I started making teams for 7s and rugby league and started travelling around the world to play in Japan, Fiji, Dubai, and so many other places.

In 2019 I got a contract to play club league in Australia with Tweed Heads Seagulls on the Gold Coast. And that is when I fully tore my ACL and MCL on my right knee. I was told that I needed surgery to play at 100% again but that it could take 9-12 months for the whole process (surgery, recovery, rehab, training).

I did not want to believe it, as I did not want to stop playing for so long and miss out on anything, so I played rugby league for the Cook Islands at the South Pacific games in Samoa. Playing on that field and being in extreme pain due to my knee made me realise how much I needed to get the surgery done!

After the surgery and recovery in NZ, I hated being away from my family, so I flew back to the Cook Islands to do my rehab and training there. After 6 months I was finally able to start jogging. Unfortunately, things turned for the worst again as I was hit from behind by someone on a motorbike which caused my knee to tear again. I had to recover all over again and was going to miss out on the 2021 Rugby League World Cup.

However, when Covid happened and the World Cup was pushed to the following year, I was able to spend that time trying to get better. When I felt 100%, we had our games in Rarotonga at the end of 2021 and I never felt better. It was so good to be playing again. I felt like I could reach out for all those opportunities and make it.

Unfortunately, we had another 9s tournament in January 2022 in Rarotonga, and I got injured again. I did not think it was anything too serious because I was still able to run after two months of rehab. However, in March during our pre-season training in New Zealand, my physio told me to get an MRI scan just to be on the safe side. It turns out that I had torn my ACL and meniscus this time on my left knee.

Everything came crashing down again. I thought I would miss out on club rugby league, nationals, and making the World Cup squad. I was depressed and going through a rough patch.

I booked my surgery for late April, but I decided to keep training and support my girls. I even played in our pre-season games and played surprisingly well. The week of my surgery was the first week of our club season and I was named captain for both my rugby league and rugby union teams.

I realised this injury did not need to be a setback and I kept pushing to be a better me. I cancelled my surgery and carried on playing. I plan to have surgery after the Rugby League World Cup.

At the end of the season, I won the 'most significant club achievement', one of the most important trophies to achieve in the club across the men’s and women’s teams. From there I kept working hard towards my goal. I made the nationals team in NZ. Most importantly I made the wider squad for the Cook Islands Rugby League World Cup team.

What did you try to show with the photos? Was there any wider meaning with any of the photos?

Rugby is a huge part of our culture now. It is very family orientated. I showed a little girl and little boy who had just finished their games but chose to stay in their rugby gear because they wanted to wait for their mum who was about to play. This is their way of supporting their mum and wanting to be like her. Cook Islands families come to support all their family members who are playing rugby league, from the young to the old.

I showed some girls warming up. We usually get given the worst fields while the men get given the good ones. Our fields often have heaps of potholes and is mainly rough with heaps of sand and uneven surfaces. Any top team would never be given a field like this. However, women love the sport so much that they will make the most of any opportunity and play on the worst ground to enjoy the game.

There was also one girl training with an under 14 boys’ team, as the girls’ side did not have enough players to field the team. I love how determined she was to continue doing what she loved. They play full on contact and just because they were boys, that did not stop her from playing. So much respect to the lads as well. Even though she was a girl they still trained and played as if she was a boy, because they knew that she just wanted to play the game she loved.

I also showed my North Habour women’s team for the Farah Palmer Cup. We were travelling to Whangarei at 6.30am in the morning. 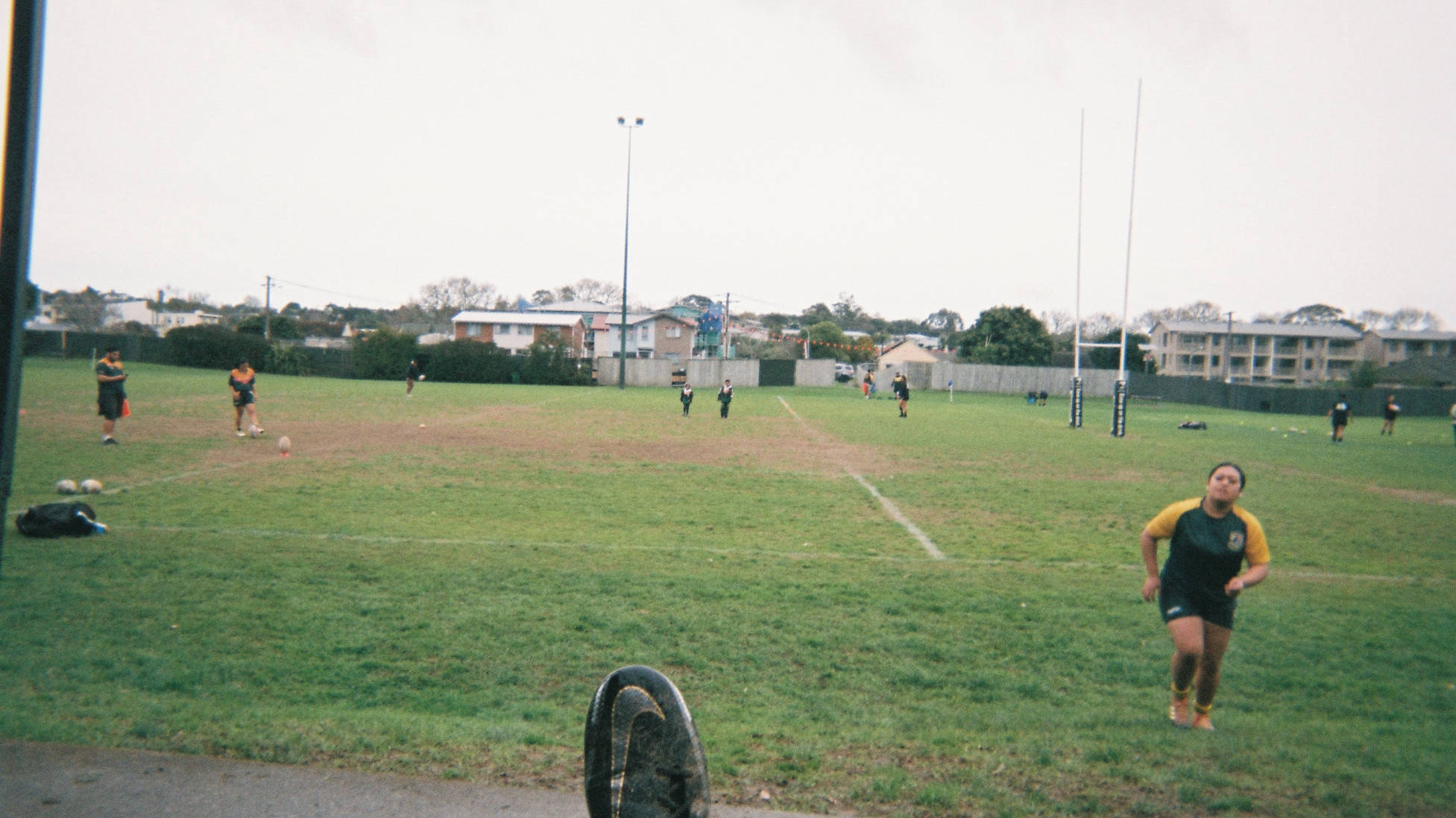 What role does rugby league play in your community and country?

Rugby league is about starting a pathway for the young girls and boys to show that we have opportunities everywhere, and as long as we work hard for our goals, we can make them into a reality. Nothing is impossible if you put in the hard work. Plus, if you love it, it comes just as easy.

Children are amazing and we sometimes do not realise how much they look up to us. Especially as mothers, sisters, and daughters, they are always watching, learning, and implementing. If we want to play the same sport that we all love as men and women, then we need to start with the young ones for a better future for equality.

Most women play to open a pathway for our younger generation and to be role models for them. Women can do just as much as men, and we want to prove that to our little ones.

What would you like to change after the RLWC in women's rugby league?

We have so much talent in the Cook Islands, but the players get overlooked because they are not given the same training and sessions as players overseas.

NRL in Australia are starting to create more women’s teams to grow the sport. I would like to see this happen more in NZ and I want to help grow the women’s game.

I would love to see more investment into the game and more sponsors. A lot of teams do fundraisers to pay for fees and kit, but boots is a different story. To get a decent pair of boots that can actually fit (especially for wide islander feet!) that are supportive and good for your sole can cost between $250-500.

It is possible to get boots under $150. However, they will most likely not fit, end up giving you blisters and inflammation, be painful, and will just break apart after one season of playing.

I had been playing with the same boots for seven years. I finally got new ones as the old ones had been kept together with super glue and strapping for so long that it just could not hold any more and everything ripped apart. We do not get sponsors and it is a struggle to afford decent boots.

To have access to affordable playing boots that are decent to play in would be amazing for all teams around the country.