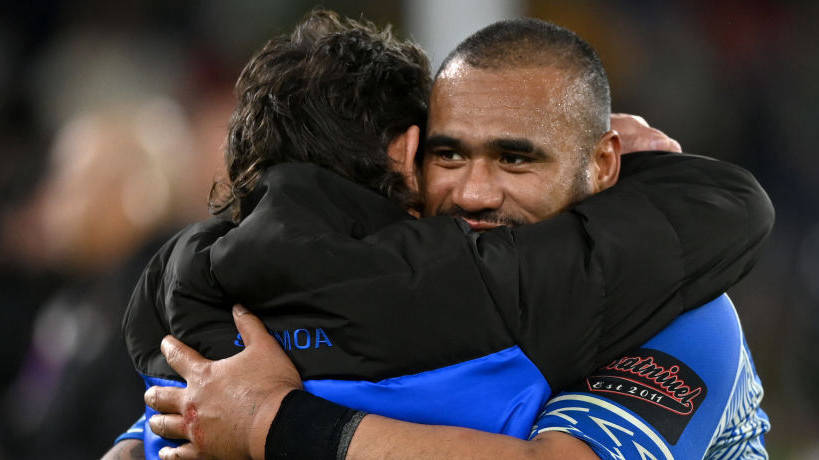 Junior Paulo may have ended as the beaten captain at Old Trafford but the Samoan powerhouse knows the impact of what his squad have achieved in the past six weeks will echo far beyond the final hooter.

The 28-year-old is among a string of players who opted to represent their heritage in the build-up to this Rugby League World Cup and leading his nation to their first ever final has more than justified his decision.

The crowd inside Old Trafford – 67,502 – represented around a third of the population of Samoa but in the wake of the 30-10 defeat against a ruthless Australian outfit, Paulo outlined his belief they can continue to punch above their weight and make a mark on the world stage.

“From the start, we’ve been aiming to build to where we wanted to get to and we’re reaping the rewards for the sacrifices players have made,” he said.

“We spoke about it during the week, giving ourselves every chance at the end of this game. We knew that whatever happened, we were all going to be able to lift our heads up and be proud.

“That’s all I wanted for these men. It’s a special bunch and unfortunately the journey comes to an end and we all go our separate ways.

“But in history, those names will always be alongside each other and we can look back and be proud of what we’ve been able to do.

“This is part of the reason we chose to represent our heritage. We not only represent ourselves, our staff and our people, it’s also about the spirit of what Samoa means to us.”

Samoa’s hopes of a fairytale finish to a journey which started with a bruising defeat against England were ultimately ended in a 10-minute spell early in the second half, when they had a man advantage following Angus Crichton being sent to the sin-bin.

The underdogs had chances to eat into the 14-0 deficit but instead ended it with an even bigger mountain to climb after Cameron Murray exploited a gap in the Samoan defence, ensuring tries from Brian To’o and Stephen Crichton were little more than consolations.

A RIDICULOUS pass sends Brian To'o over for Samoa – can they do the impossible here?

“They are a great team and defended well but we didn’t take our opportunities,” Paulo added.

“But seeing the boys celebrate our tries, seeing him [Crichton] score that try, despite where we were on the scoreboard, it meant everything to us.

“It showed how proud we are of each other and how special this group is.”

Samoa coach Matt Parish was similarly frustrated at his side’s inability to make the most of periods in which they were on top but had nothing but pride when reflecting on their tournament as a whole.

“The result is disappointing but certainly not the effort or commitment of these guys,” he said. “I couldn’t be prouder or happier with the group.

“We probably never got close enough to put enough pressure on them or take our chances like we should have.

“We needed a lot of things to go right for us today. We were down to 19 players, that’s all we had left in the squad. We had blokes out of position and they were so courageous against a great side.

“This group is very special and it’s humbling to see how they’ve touched so many people around the world.”