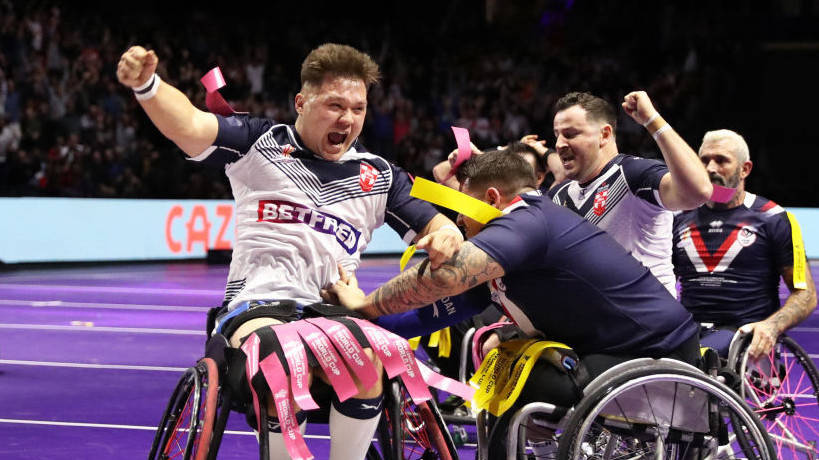 The skipper burst through a gap with two minutes remaining to spark deafening noise from the world record 4,526-strong crowd and seal revenge for England, who were edged out in scenes of similar late drama by the same opponents five years ago.

France had twice opened up eight-point leads in the first half but the hosts stayed in touch through Halliwell and Jack Brown.

Lewis King and Brown’s second put England in front after the break but Les Chanticleers were not about to give up their grip on their crown without a fight and drew level through a combination of Gilles and Nicolas Clausells.

With extra-time looming towards the end of a bruising encounter, Halliwell was the hero as the host nation ensured they will not leave their own party empty-handed.

Is this the try that wins it for England?

The majority of the passionate record crowd were getting behind the hosts but France settled into their rhythm quickly and went ahead inside two minutes through a Lionel Alazard penalty, his 30th goal of the tournament.

The same player was soon on hand to extend Les Chanticleers’ lead with the first try of the final, bravely dotting down in the left-hand corner after France had worked an overlap.

Nicolas Clausells’ conversion made it 8-0 and he later sprung into defensive action with a try-saving tackle on King, who spilled forward in contact.

Julien Pennella was denied in similar fashion at the other end before England got off the mark, Halliwell spotting a gap to go under the posts for a score converted by Nathan Collins.

The first half was not going to pass by without either side’s prolific try-scorers having their say and both scored before the hooter sounded as the game remained nip-and-tuck.

Mostefa Abbasi was first to cross, stretching France’s advantage to eight points after swift hands sent him into the corner for his 17th try of the tournament – one he had time to celebrate before putting the ball down.

But England were back within two by the break as Brown, denied a try moments earlier for a double movement, waltzed through the French defence and Collins added the extras.

Buoyed by their strong finish to the first period, England came flying out the traps at the start of the second and went in front for the first time in the match when Brown set King free for a routine finish on the left.

The hosts remained camped in the French half as they looked to extend their lead and shortly after Joe Coyd had been denied by a last-ditch Gilles Clausells tackle, Brown was the man to find a gap and reach for the line to draw level with Abassi on 17 scores.

The French response was instant as the tried and tested uncle-nephew formula proved lethal, Nicolas Clausells finding Gilles Clausells to throw a dummy and reduce the arrears.

The former’s conversion made it a two-point game once more and his penalty made it all square on the hour mark to set up a nerve-shredding final 20 minutes.

French backchat proved costly as England were next to strike, Collins successful with a penalty which had been moved forward five metres, but it did not take long for Nicolas Clausells to respond in kind.

Clausells’ next attempt landed wide of the upright as France missed a chance to go in front.

And they were made to pay when Halliwell raced through in the dying minutes, England seeing out the time that remained to seal their second World Cup triumph 14 years after their first.