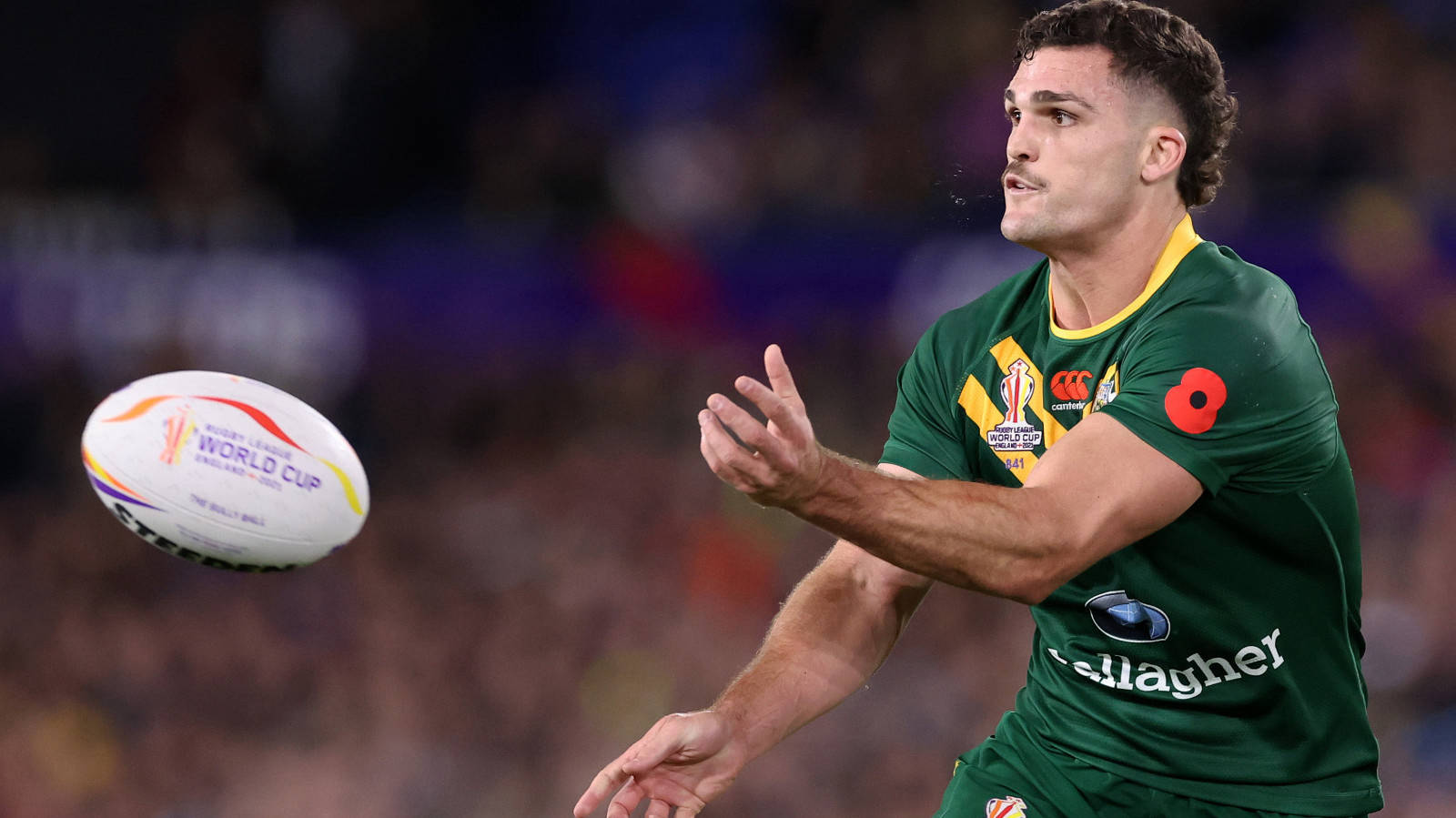 Cameron Munster has told Nathan Cleary to relax and prove his big game credentials when it really matters.

Cleary arrived at the Rugby League World Cup under the red-hot glare of attention, fresh from inspiring Penrith to back-to-back NRL titles that established him as the world's top player.

He sat out the Kangaroos' opener against Fiji before making his debut against Scotland, winning a much-talked about halfback selection battle with Daly Cherry-Evans before the knockout stages.

However, his performances have been solid if unspectacular, with Panthers partner-in-crime Jarome Luai - a rival in this weekend's final - putting together a string of performances that secured his place in the team of the tournament.

Munster has seen Cleary's work rate in the halves first-hand, both in training and in the heat of action, especially during last weekend's dramatic semi-final win over New Zealand in Leeds.

And the Melbourne Storm star believes the big stage of Old Trafford, where the Kangaroos take on Samoa in a bid to win a third consecutive title, is just the place to prove his status.

"Nathan puts high expectations on himself, as we all do, but we’re all team players and he's been pretty solid," said Munster.

"When you have the best of the best playing alongside you, at times some blokes will outshine you. If you look back on his stats, he’s had a consistent three weeks.

"He’s the heart and soul of the Penrith team when it comes to structure and organisation so when he comes to big teams like us, or even at Origin time, he won’t shine as much as he’d like.

"But that’s the footy we’re playing at the moment, when you’re playing for Australia with so many good players inside and outside of you, anything can happen.

"He’s come out of his shell, he’s talking more in meetings. He was sitting back a bit more letting the other lads have a chat but now he’s stamping his authority on the team.

"He’s done a lot in the game for such a young age and everyone’s listening to him. We all listen to each other, most of the players have played in big games – in Origin as well as grand finals – so when anyone talks, everyone listens."

Cleary's kick percentage, usually so reliable for Penrith, suffered in early matches and he struggled to get used to the lighter ball being used during the World Cup.

Coach Mal Meninga has been consistent in his praise for the playmaker, even if there were some calls for Cherry-Evans, who helped Queensland upset Cleary’s Blues in Origin this year, to return for the final.

“The last few games haven’t been my best but I feel like I’ve been building," said Cleary.

“I feel like I do belong and feel like I’ve got a long way to go to play my best footy but I’m doing everything I can.

“Coming into a new team, it’s pretty hard to gel straight away with new combinations. In a team like this you don’t need to be the superstar every week and you can just try and unlock other players and gel really well as a team.

"You can’t be perfect all the time, you’re not always going to have good days, you’re going to have bad days, it’s about trying to improve and get better, that's my mindset."