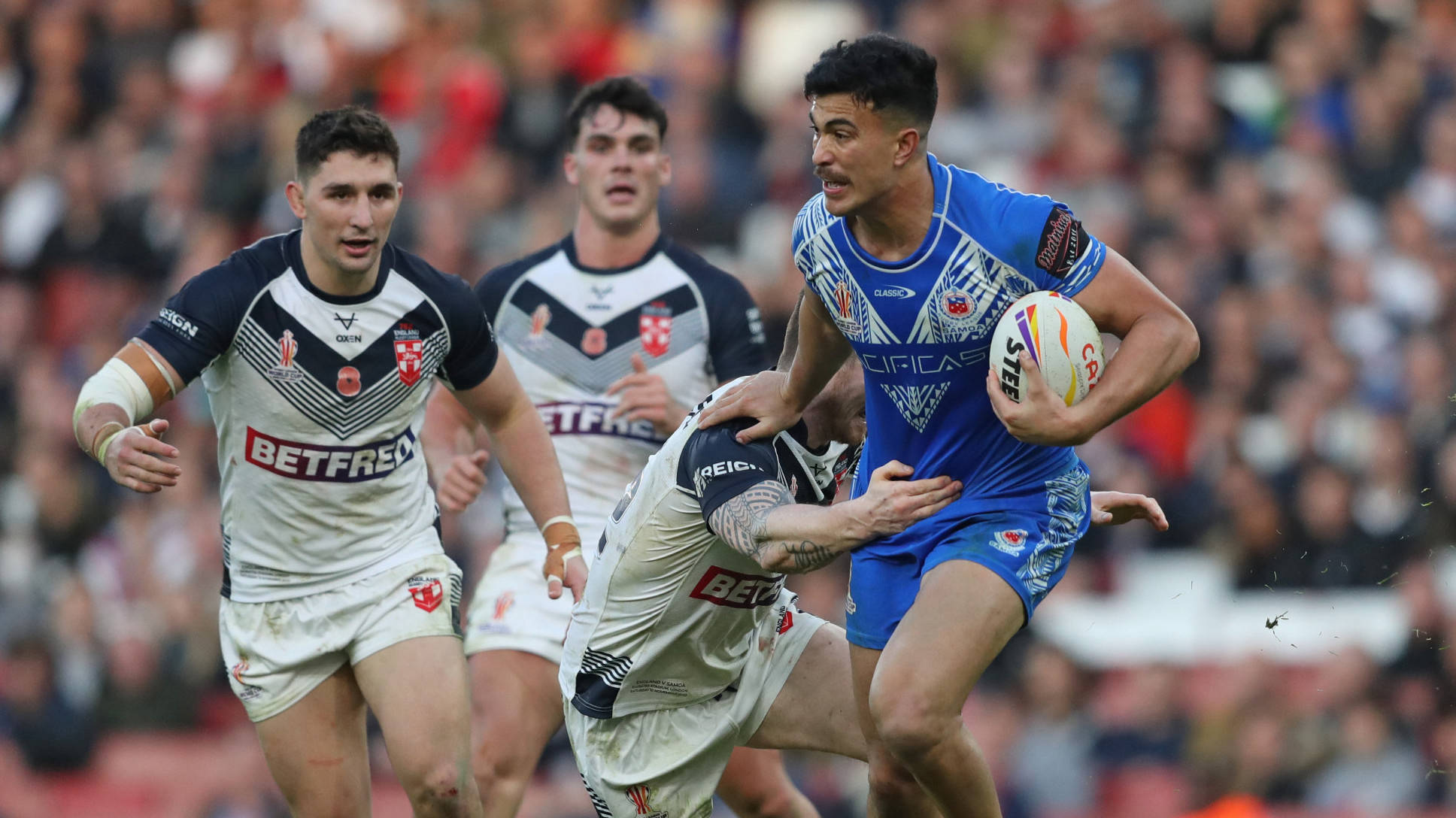 After five weeks of unparalleled drama, the men’s Rugby League World Cup comes to a stunning conclusion at Old Trafford on Saturday as Australia and Samoa fight it out for the title.

The Kangaroos are no strangers to this stage having never lost a semi-final and Mal Meninga’s side can claim a third straight crown with victory in Manchester.

But Matt Parish’s Samoa are out to spoil the party for the second week running after Stephen Crichton’s golden point field goal shattered English dreams at the Emirates in the last four.

Here are the five areas which will decide which way the pendulum swings come the final whistle.

Australia may have edged a thriller 16-14 against New Zealand at Elland Road to book their final place but captain and talismanic full-back James Tedesco will know there is plenty more in his tank.

‘Teddy’ has not quite been at his rip-roaring best during this tournament given the exceptionally high standards he sets himself, Josh Addo-Carr’s phenomenal try-scoring exploits stealing the limelight.

Tedesco’s opposite number this weekend is a familiar face in the shape of Sydney Roosters teammate Joseph Suaali’i who has been in fine fettle at the back for Samoa.

Suaali’i could easily have been wearing green and gold in this tournament but like so many other NRL stars followed his heritage and that has allowed him to dazzle in the No.1 jersey having featured on the wing domestically.

The 19-year-old is arguably the game’s most prodigious talent, causing every side havoc in behind the ruck with his powerful carries and intelligent support lines.

Suaali’i’s propensity to run with his knee up has already been cautioned, so he will have to be wary of that on the big stage as Samoa cannot afford to be ill-disciplined, while the battle of the skies is set to be an intriguing one with both sets of halves capable of dropping the ball on a sixpence.

Battle of the halves

Close friends and Penrith Panthers teammates Nathan Cleary and Jarome Luai will face off for the first time since their junior days on the biggest stage of all.

Again, they could have been teammates here if Luai – who also qualifies for New Zealand – had opted for Australia.

However, the 25-year-old five-eighth has been instrumental in Samoa’s resurgence since that opening day humbling to the hosts, winning player of the match as they claimed revenge with a 27-26 semi-final win in North London on Saturday.

Cleary has had his own battle to fight, seeing off the competition of the experienced Daly Cherry-Evans – a World Cup winner at this same venue with the Kangaroos in 2013 – for the coveted scrum-half spot.

Whoever can get their side motoring, marshal the troops expertly and make the attack sing will likely finish with a winners’ medal dangling around their neck.

Samoa captain Junior Paulo can breathe a massive sigh of relief for the second week in a row after he escaped sanction for a tip tackle on Tom Burgess.

Paulo received just a caution, having needed a successful appeal to take the field in the semi, and will lead the charge up front for the Pacific Islanders.

Joining him is Canberra middle Josh Papali’i, who intriguingly is the only Samoan to have played in a World Cup final previously.

Papali’i won the World Cup in 2013 when representing the Kangaroos and can use that experience to help inspire a youthful but exceptionally talented Samoa squad to an unprecedented glory.

The Kangaroos have plenty of their own firepower, with Manly’s Jake Trbojevic and Eels prop Reagan Campbell-Gillard starting against the Kiwis.

Isaah Yeo is widely regarded as the world’s best loose forward while Tino Fa'asuamaleaui and Patrick Carrigan are coming off super NRL seasons and add plenty of oomph.

Just because this will be the biggest game of their lives for these players, does not mean they need to reinvent the wheel.

Bossing the basics will be key to keeping calm at the Theatre of Dreams and piling the pressure onto the opposition.

Both sides are littered with NRL champions old and new but whoever stays on top of ball retention and completes their sets is likely to nudge ahead from the off.

Last tackle plays will also be crucial with Ben Hunt’s hanging bomb finding Addo-Carr last week and Luai’s dancing feet slicing open the England defence on several occasions to show what both sides can do with their last roll of the dice.

Centre of the action

Presuming both sides stick with the men who did the business in the last four, the battle on the left and right edges at centre could be pivotal in swinging the outcome.

With two tries and that match-winning drop goal, Penrith’s Crichton stole the show in the capital and has even been talked up as a potential $1million dollar player since.

But standing in his way on Australia’s left edge will be the powerful Latrell Mitchell who together with Addo-Carr has helped scythe through opposition defences all tournament.

On the other edge for Samoa, Tim Lafai has arguably made the biggest impact at this tournament after answering an injury SOS following the opening game.

The Salford star scored two tries up against clubmate Kallum Watkins on the weekend but will face another stern test in the Kangaroos’ Jack Wighton who has forced his way into the team with Valentine Holmes shifting out to the wing.

Wighton pulled off a highlights reel-worthy offload for Australia’s second try in Leeds but was also ferocious in the tackle with former Canberra teammate Charnze Nicoll-Klokstad able to testify to that.

Whoever wins their individual battles is likely to be toasting success on the tiles in Manchester come Saturday night.