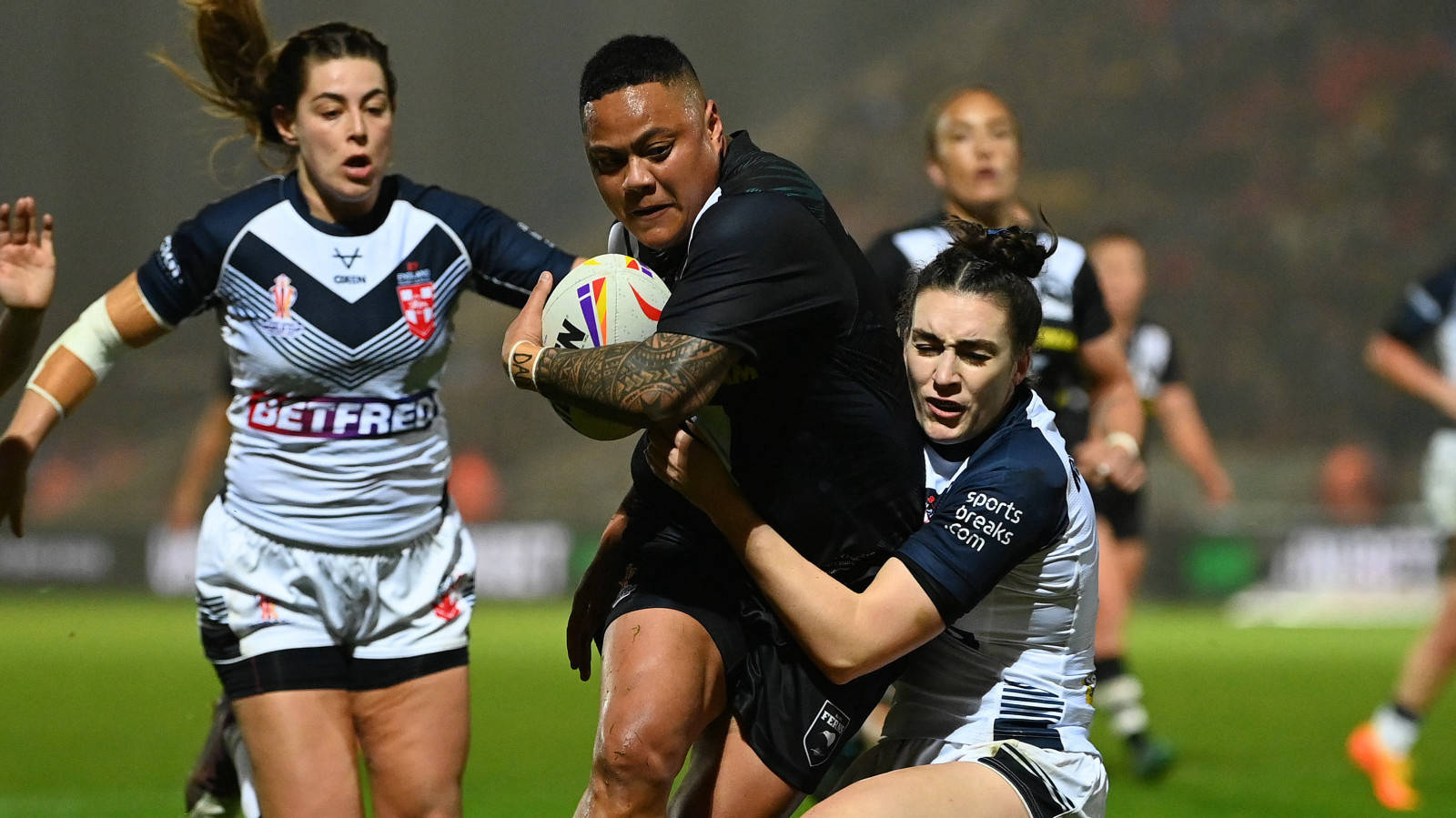 By Josh Graham at the LNER Community Stadium

Fran Goldthorp’s opener got the hosts going but Hufanga responded and together with Amber Hall wreaked serious havoc on New Zealand’s rampaging right edge to slice open the spirited but outmuscled English defence.

Raecene McGregor gave the three-time champions a two-point lead at the break but further tries from Otesa Pule and Brianna Clark put the game beyond doubt.

If Saturday’s men’s defeat was an arrow straight through the heart of England’s hopes of winning a World Cup on home soil, then it was death by a thousand cuts on a misty Monday night in York for the women, as the Kiwi Ferns ground their progress to a halt at the semi-final stage for the second successive tournament.

READ MORE: Five things we learned from the women's semi-finals

There was to be no revenge for the 52-4 thrashing the Lionesses suffered at the hands of the same opponents at this stage five years ago.

Instead, Ricky Henry’s side will take on Australia in the final as the only two teams to have ever won the tournament go head to head at Old Trafford on Saturday.

Craig Richards made it clear in the week anything short of lifting the trophy will be a failure for his Lionesses and they seemed to have that message ringing in their ears as they flew out of the blocks.

Katelyn Vaha’akolo made a meal of dealing with a kick to hand England a dangerous repeat set early on in front of a deafening York crowd of 7,139.

And the hosts immediately made the Kiwi Ferns pay, putting on some lovely shape to send full-back Goldthorp steaming over on the right edge before Tara Jane Stanley’s excellent touchline conversion put the hosts 6-0 up.

Back came Henry’s side, however, a thunderous carry from Hall making light work of Amy Hardcastle’s attempted tackle before she passed to Hufanga, whose try reduced the gap to two points.

But it was Hufanga’s forward pass after collecting McGregor’s super dink over the top that curtailed another try-scoring opportunity for the World Cup’s most successful women’s side.

They did not have to wait long to take the first lead for the first time, though, as McGregor’s dart over the line from dummy-half put them 8-6 up with just shy of nine minutes left before the break.

Hardcastle did well to gather McGregor’s tricky grubber as the Kiwi Ferns turned the screw much to the frustration of the partisan crowd.

? Otesa Pule scores a class try for the Kiwi Ferns.

McGregor’s boot was pulling England left, right, up and down – Leah Burke doing well to diffuse the bomb and avert further danger before Georgia Roche’s hack forward gave England good attacking ball but Hardcastle could not cling on.

New Zealand reclaimed the ascendancy in the second half, Pule scoring her first try of the tournament as the numbers stacked up on the left edge.

And Apii Nicholls finally found her kicking boots to land her first conversion, having taken over kicking duties following Clark’s first miss, to make it 14-6 with a little over half-an-hour to play.

When the Kiwi Ferns butchered the kick-off, England had hope but their attack was blunted yet again by a tremendously imposing and physical New Zealand defence.

Hufanga’s rampaging run down the right had the Lionesses backtracking at pace and after three long passes went left, Clark skipped in under the sticks to open up a 14-point lead.

England had no shortage of possession but time after time contrived to finish sets with a whimper, much to the ire of those urging them forward.

Former cricketer Courtney Winfield-Hill’s deft chip over the top forced a spill from Nicholls but yet another repeat set went awry as the experienced Jodie Cunningham made an uncharacteristic handling error.

Winfield-Hill felt the full force of the rampaging Hall before New Zealand were denied a fifth try when the video ref decided captain Krystal Rota was held up over the line with 15 minutes to play.

England tried and tried but it just was not to be their night, New Zealand taking a thoroughly deserved victory to leave just the wheelchair side capable of bringing home the trophy for the hosts after a deflating 48 hours.