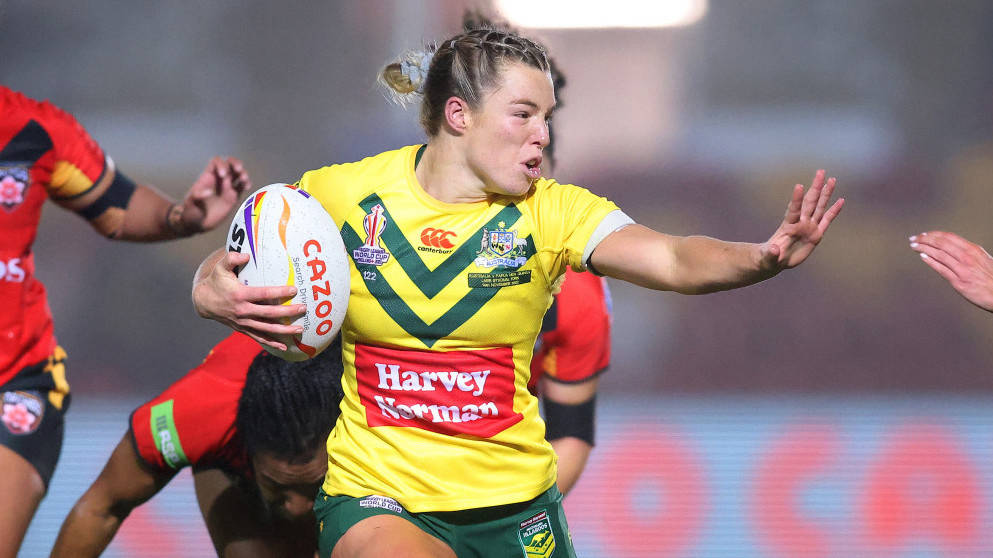 Playmaker Tonegato was the brains behind the tries, as she and Isabelle Kelly grabbed hat-tricks to propel the two-time champions to their fourth successive World Cup final.

Papua New Guinea lit up the misty York night with a strong opening 10 minutes against the Jillaroos but were unable to challenge their opponents who put on a ruthless free-scoring, with Shenae Ciesiolka's double adding to the 15-try total.

The Jillaroos were determined to keep the Orchids scoreless and succeeded with their reward a trip to Old Trafford next Saturday where they will play three-time champions and neighbours New Zealand.

? Australia on fire in the fog!

Papua New Guinea's crafty kick-off saw them regain possession immediately and Orchids captain Elsie Albert led the charge with a line break down the middle to go within metres of the Australian line, but a grubber kick by Sera Koroi was too strong and bounced out of bounds.

And the Jillaroos made the most of it as Lauren Brown rushed down the left and gave Holli Wheeler the opportunity to make a dent in the Orchids defence, barging over the line for the first score of the match.

From there, Australia slipped into their usual bulldozing selves after an error-strewn opening few minutes, Kelly grabbing a double in just three minutes on the left edge.

The Sydney Roosters centre took advantage of the Orchids weak defence on their right flank and punched through twice to dot down in the corner before Shaylee Bent crossed shortly after.

Tonegato was the instigator of a line break on Australia's favoured left side and fed the ball wide to Evania Pelite who cruised over the line to claim her sixth try of the tournament.

And Tonegato grabbed another assist just minutes later, passing inside to Ciesiolka who found her way through for the champions' first score out on the right.

The Jillaroos were in total control of the game as Olivia Kernick's try and Kelly's hat-trick score gave them a comfortable 40-0 lead heading into the break.

Instrumental in the Australian attack, Kelly continued to sparkle with an assist to Jess Sergis who opened the second-half scoring.

The onslaught continued and the Jillaroos notched try after try with Ciesiolka dotting down for her double and Tonegato getting her own score in style.

The full-back was on the receiving end of a lovely inside pass by Pelite who had broken through the line with a surging run, and Tonegato claimed her second moments later with a run down the right.

Despite their dominance on the pitch, the Jillaroos were guilty of coming up with several unforced errors throughout the game and soon Papua New Guinea sniffed a chance at glory by registering a score against the game's dominant force.

But the Orchids were denied at the last hurdle as Therese Aiton and Gloria Kaupa were both held up under the sticks.

Jamie Chapman soon ripped the Orchids of any chance at opening their account, collecting the ball, turning on the after burners and sprinting the length of the pitch to dot down for a score.

Fittingly, Tonegato proved that all good things come in threes with her hat-trick just minutes later to round off a convincing victory but a sterner test lays in wait next weekend at Old Trafford for the showpiece.