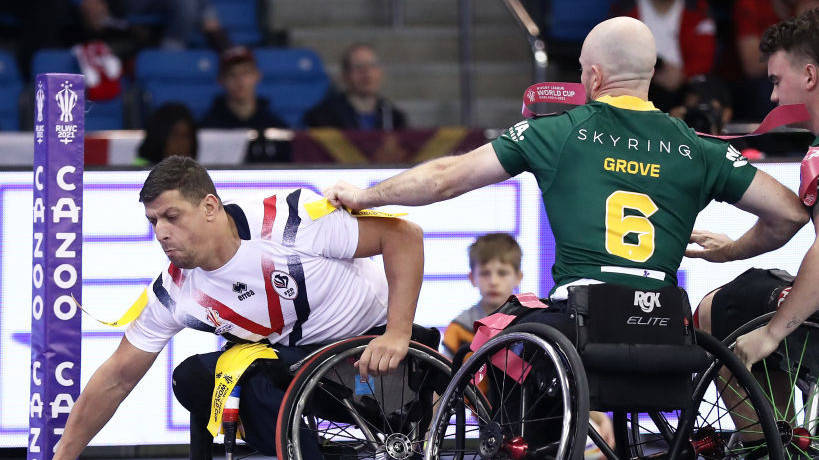 Abassi’s four tries took him to 16 for the tournament, the most any player has scored at a single World Cup, while Jeremy Bourson is just one behind him after crossing five times in Sheffield.

The Wheelaroos battled hard, Brad Grove and Zac Shumacher crossing twice each, but the reigning champions will now look to claim their third World Cup title against England or Wales on Friday.

France drew first blood as Florian Guttadoro found a gap down the middle for an early try but Australia soon sent the first of many warning shots.

Captain Grove led the charge and crossed for their first of the game, sneaking through a gap on the left to dot down.

Bourson picked up his first two tries in the space of two minutes but an error close to France's line soon left the reigning champions in trouble and the Wheelaroos struck once more, claiming a loose ball to set up Schumacher to reduce the deficit.

The irresistible speed of the French team has proved an effective weapon in the tournament so far but Australia dug deep to try and contain them, momentarily delaying Bourson's hat-trick.

But no matter how fast they chased, Bourson was always quicker, and the Catalans Dragons player soon stormed over for his fourth and fifth as France established a comfortable cushion.

Nicolas Clausells weaved down the court for his first, converted by his uncle, and captain, Gilles Clausells, before Abassi whistled past for a hat-trick shortly after.

Australia found their spark in an increasingly physical second half as Diab Karim added six more points but France simply responded in their trademark fashion and Guttadoro crossed for his second.

The challenge continued in a period of see-saw action as Schumacher dotted down for his double and Guttadoro completed his hat-trick.

But they were ultimately left with too much to do and a final burst of energy from France saw Thomas Duhalde and Nicolas Claussells cross to keep the defence of their trophy on track.