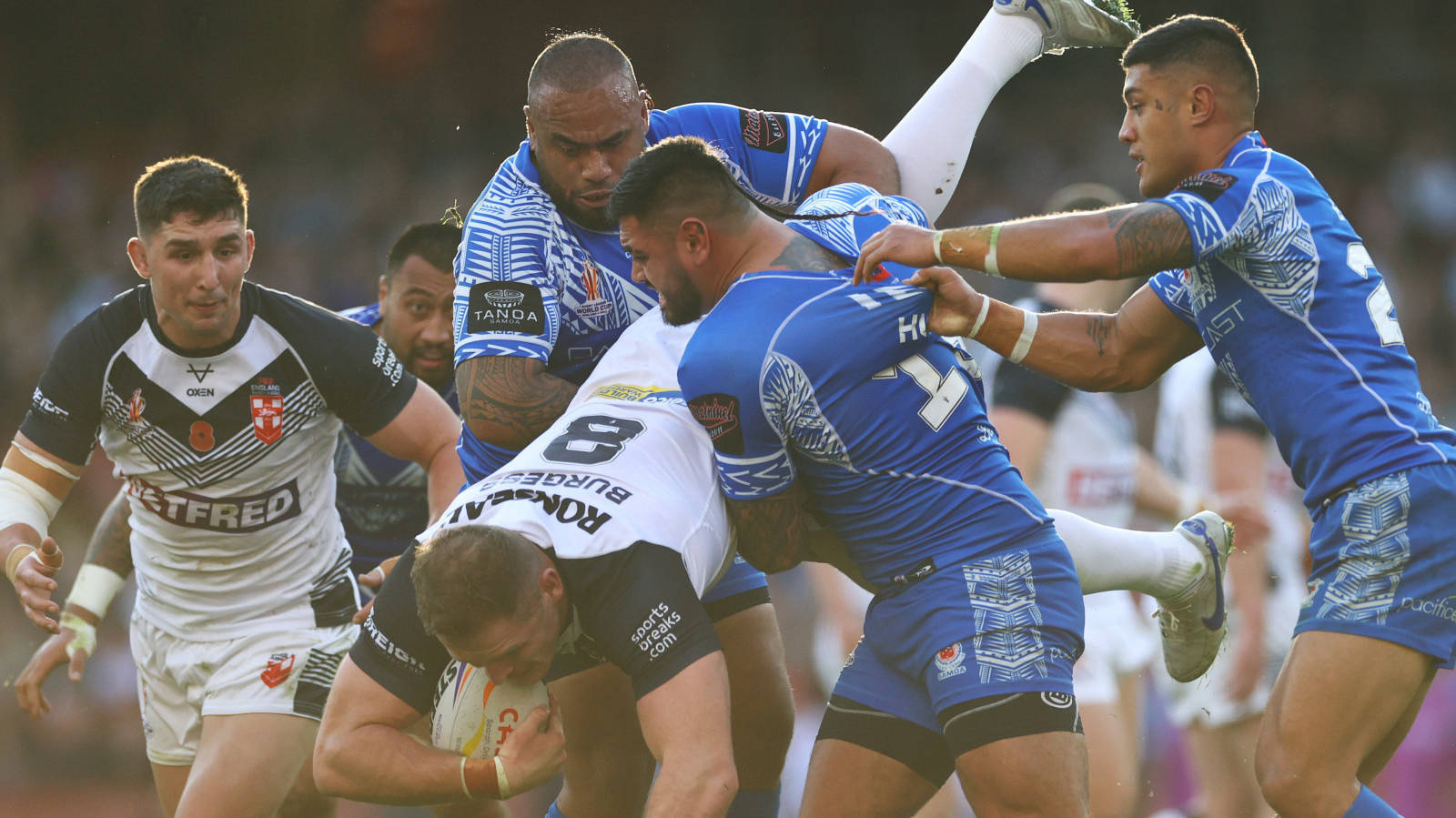 By Josh Graham at Emirates Stadium

Samoa captain Junior Paulo cannot bare to think about missing the biggest game in his country’s history as more disciplinary drama surrounds him ahead of the World Cup final against Australia.

Paulo only took the field in the dramatic 27-26 semi-final win over England after a successful appeal against a one-match ban for striking David Fifita in the last-eight triumph over Tonga.

But after the Paramatta Eels prop was put on report and sent to the sin bin for a 12th-minute tip tackle on Tom Burgess, he faces another anxious wait to confirm whether he is allowed to run out at Old Trafford against the Kangaroos.

However, the 28-year-old middle insisted he would not let the uncertainty dampen the celebrations minutes after emerging from a Samoa dressing room celebrating Stephen Crichton’s match-winning golden point field goal to the tune of Neil Diamond’s Sweet Caroline.

He said: “I can’t see myself missing out on what is probably the biggest game in Samoa’s history. What we’ve done just to get where we are is kind of overwhelming but the journey continues for us.

“I had some practice last week. It’s a game of footy and sometimes accidents are going to happen. We play at a fast pace with many collisions.

“Unfortunately, I was caught in the middle of what was very much unintentional. It’s just the way footy goes sometimes. There’s not much I can do, we can only control what we can.

“We just have to enjoy the moment for now and then we will wait and see.”

Fifita produced a statement to help Paulo with his appeal last week and he thanked devastated England head coach Shaun Wane who revealed in his own post-match press conference that he did not think the front rower should miss out on an Old Trafford showdown with the Kangaroos.

Similarly, Samoa head coach Matt Parish struggled to envisage a situation where he would have to make do without his captain.

He said: “He clearly let him go, obviously it was a dangerous position and he let go.

“Royce [Hunt] was in the tackle too and he obviously made a contribution to it. They placed him on the ground, they didn’t go through with it, they didn’t drive him. Tom Burgess got up and there was a penalty, [we] moved on.

Paulo will find out his fate on Monday but for now can reflect on his role in Crichton’s first try as a sensational high looping offload just before he was tackled kept the ball alive and allowed Jarome Luai and his dancing feet to send the centre crashing over after Tommy Makinson had got the hosts firing after the break.

He said: “It would have been nice if I’d actually scored it! It’s just the style of footy that we play.

"Sometimes in the game of rugby league there’s going to be gameplans and blueprints but other times you just have to play off the cuff footy.

“Jarome took the line on and as simple as it sounds, and it’s a bit of a cliché, we just had to play eyes up footy. Some of it you don’t think, you just back your instincts and your preparation throughout the week.”

Mal Meninga’s all-conquering Kangaroos will be an even bigger mountain for Samoa to climb on Saturday, but Paulo insisted they can deliver their best entertaining brand of footy in the pressure cauldron of a final against the back-to-back champions.

When asked if Samoa can play the same way at the Theatre of Dreams, Paulo replied: “We can play with the same belief. Belief is everything in this team, we knew what was going to happen coming into camp.

“Time was on our side, knowing that if we were better than the week before, we were going to give ourselves a chance and we are heading to the World Cup final and the belief never changed.”