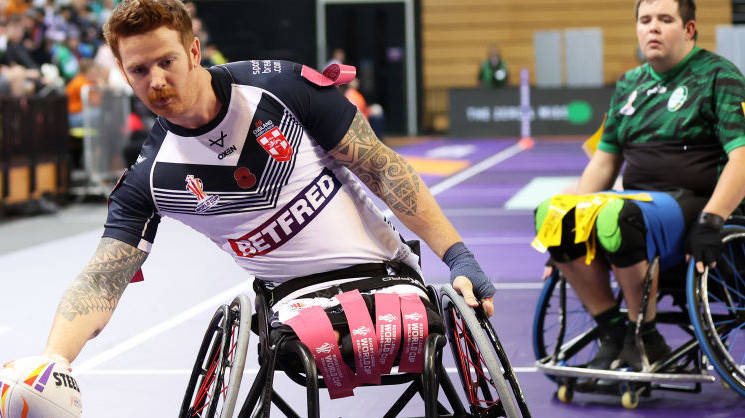 England head coach Tom Coyd feels his side are taking full advantage of being the hosts of the World Cup as they prepare for a semi-final showdown with Wales.

The England team are refreshed and raring to go having spent a night back at home before regrouping for Sunday’s knockout game.

The 2017 finalists won all three group games to qualify for the semi-finals top of Group A and will now face Wales for the first time in a World Cup.

“Most of the team had a night at home after the Ireland game to just get a bit of a breather and touch base with the dogs, have a night in our own beds,” Coyd said.

“We've done really well just taking each game as it comes so far, and we’re not going to change our approach.

“I’ve got a selection headache and that's what we want, everyone is in form and in competition for places.

“But everyone has a mindset that it's all about the team, so although people will be disappointed, they know that they're part of something bigger than themselves.”

England have made the journey up from their home away from home, the Copper Box Arena in London, to the scene of the semi-final, the EIS Sheffield.

Captain Tom Halliwell was sad to say goodbye to the venue that has Olympic and Paralympic history at its core, having hosted handball and goalball at London 2012.

However, the EIS has welcomed plenty of Paralympic stars to train and compete, and Halliwell and his side are looking to replicate the impact of the Games a decade ago.

He said: “It's been like a second home for us. With the legacy of 2012 and it being 10 years since that, we wanted to recreate something similar as well.

“I feel like we've done that, with record-breaking crowds at each of our games, but we have to move on and Sheffield's the next destination.

“We’ve come here, we’ve familiarised ourselves with the settings and hopefully we will get a win.”

Despite being the visiting team, Wales are comfortable in their surroundings having played all of their group games in Sheffield.

The 2017 semi-finalists lost to France in their opening game before rebounding with two impressive victories over the USA and Scotland.

England have reached every World Cup final but Wales captain Stuart Williams hopes even some of the home fans will cheer for the underdog.

“I hope everybody gets behind the buzz for all the players, behind the hype for the semi-finals because we're literally one step away from the final now,” he said.

“And that's the way that we need to see it. Obviously, we know we're going to be the underdogs again because the World Cup is here in England, it is England we are playing.

“But that is great, our backs are against the wall and we will see what happens. That's the way we like it.

“I think everybody should be fired up and I’m pretty certain they will be.”