Samoa will take on Australia in their first World Cup final 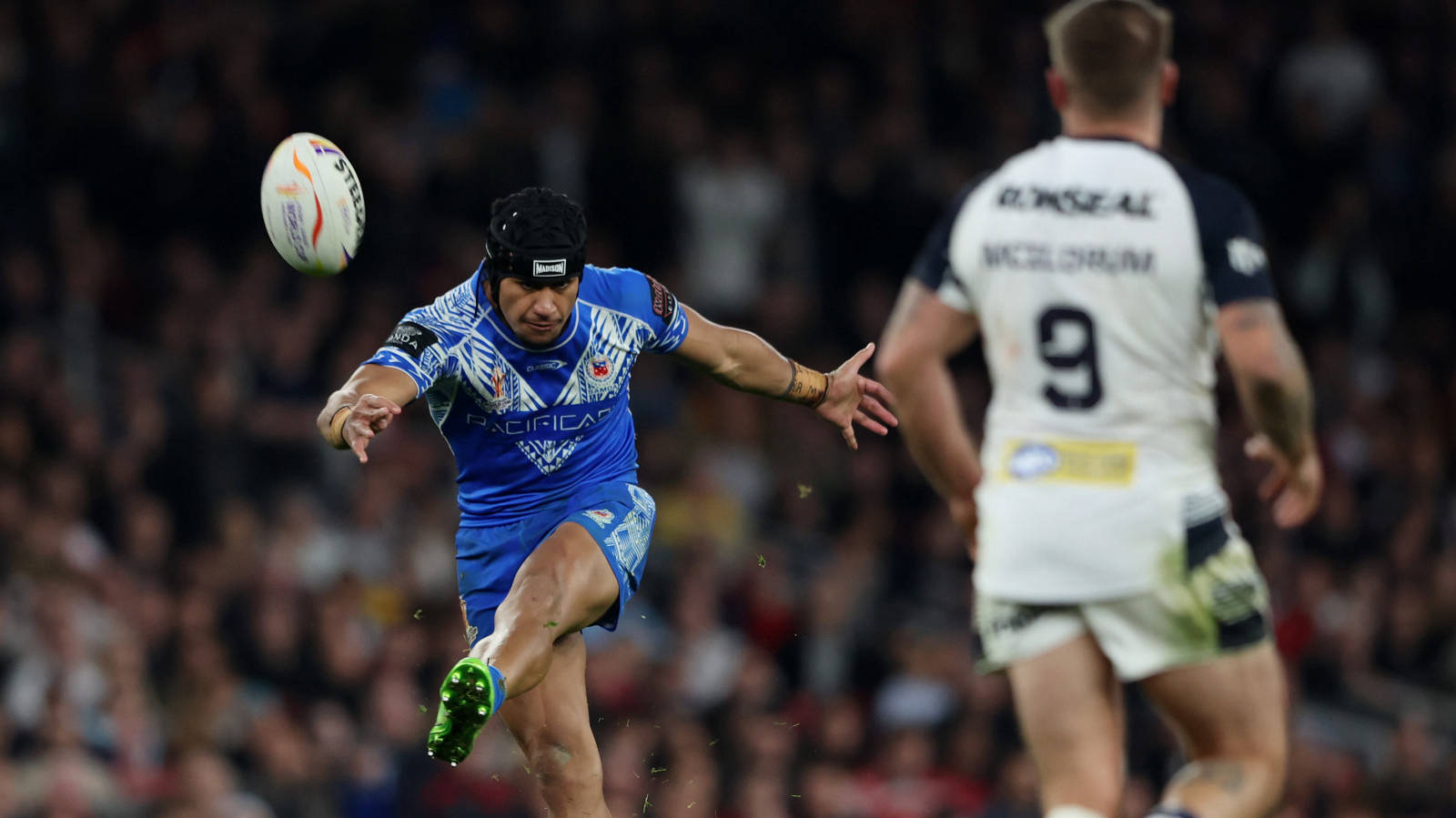 Samoa will take on Australia in their first World Cup final

By James Toney at the Emirates Stadium

After Friday night's semi-final classic in Leeds, this one was, if that were possible, even more nail-biting, if lacking the cut and quality of the Kangaroos’ win over the Kiwis.

And if revenge is a dish best served cold then Samoa forced the hosts to indulge in double helpings as they booked their place in a showdown with Australia at Old Trafford next weekend, their first final.

England will leave North London with plenty of regrets but in truth it was a tactical masterclass by Samoa, who always seemed to just be that fraction better than their rivals.

However, it still went to the wire and when scores were deadlocked after 80 minutes, Crichton took his chance with a precision drop goal that left the hosts crushed.

Samoa, adrenaline surging after their pre-match Siva Tau, started shakily, dumping their kick-off into touch but soon settled to take the lead.

England were too easily exposed on their right edge, Joseph Suaali’i breaching the rearguard and the electric Tim Lafai dancing past Salford team-mate Kallum Watkins to break the deadlock.

England coach Shaun Wane was the architect of red-hot starts in last week's thrashing of Papua New Guinea and the group game with Samoa.

And if that was the game plan again, Samoa weren't about to make the same mistake twice, the hosts struggling to impose themselves.

Samoa captain Junior Paulo was sent to the sin-bin for a tip tackle on Tom Burgess while they lost both Oregon Kaufusi and Fa'amanu Brown to concussion protocols after they collided when trying to bring down Tommy Makinson.

England appeared to make their advantage count when Watkins outpaced Lafai in a reverse of the opening try, only for replays to show he'd dropped the ball before getting it to ground.

Both sides were struggling with their error count in what quickly became the sort of nervy affair you expect from a semi-final but George Williams's line break and pass released Elliott Whitehead for a score that Makinson converted.

However, England were once again caught napping on the right, as Jack Welsby was slow to get back into marker, Ligi Sao went blind from dummy-half and caught Watkins and Dom Young flat-footed.

England looked unstoppable in their previous four games, but this was clumsy in comparison, Samoa's tactics to exploit the chaos and nullify the hosts' attacking endeavour with a succession of big hits caused problems.

Wane needed a new gameplan at half-time, urging his side to stay patient for the opportunities that would surely come their their way as Samoa tired.

You sensed England just needed some luck to get some winning momentum and that's exactly what happened just after the restart, when Lafai spilled Williams's speculative kick and a predatory John Bateman pounced on the loose ball for the easiest try he'll ever score.

However, Samoa restored their lead with a score of brilliant desperation, Paulo managed to offload as he rampaged towards the line, Jarome Luai punched it speculatively towards Crichton who crossed the line, before threading his second conversion.

No team have gained more metres from offloads at this World Cup than Samoa and England were increasingly struggling to find a response as Samoa hogged the territory.

Young dropped a regulation high ball to allow Samoa to establish themselves deep in England’s half and within minutes they'd scored again, Welsby again beaten as the galloping Lafai crossed for his second.

Samoa were now playing with a swagger and a smile while increasingly England were chasing shadows, the deficit just eight points but the home team seemingly lacking ideas.

Tempers frayed as England panicked, Bateman thought he'd scored only for the try to be chalked off as Wane's team swarmed forward, Herbie Farnworth shaking off six tackles to finally break a resolute blue wall.

Makinson, heart pounding, laced the conversion as 40,489 got on their feet, to roar and implore England on and then levelled the scores with a penalty after Paulo was penalised for a late hit on Sam Tomkins.

England switched roles, moving Victor Radley to hooker as they belatedly discovered the intensity and energy they'd been missing for so long.

However, when you are playing on the edge it is so much easier to teeter on the brink.

And Radley's loose pass was intercepted by Crichton who raced half the pitch to silence the crowd for a try he duly converted to restore the six-point lead with just five minutes remaining.

And still it wasn't over as Farnworth was set free by Williams to score, Makinson somehow maintaining his composure to level the score with a conversion just 60 seconds from the hooter.

However, the thrills and spills continued in overtime, Samoa maintaining their composure and Crichton took aim right through the middle of English hearts.