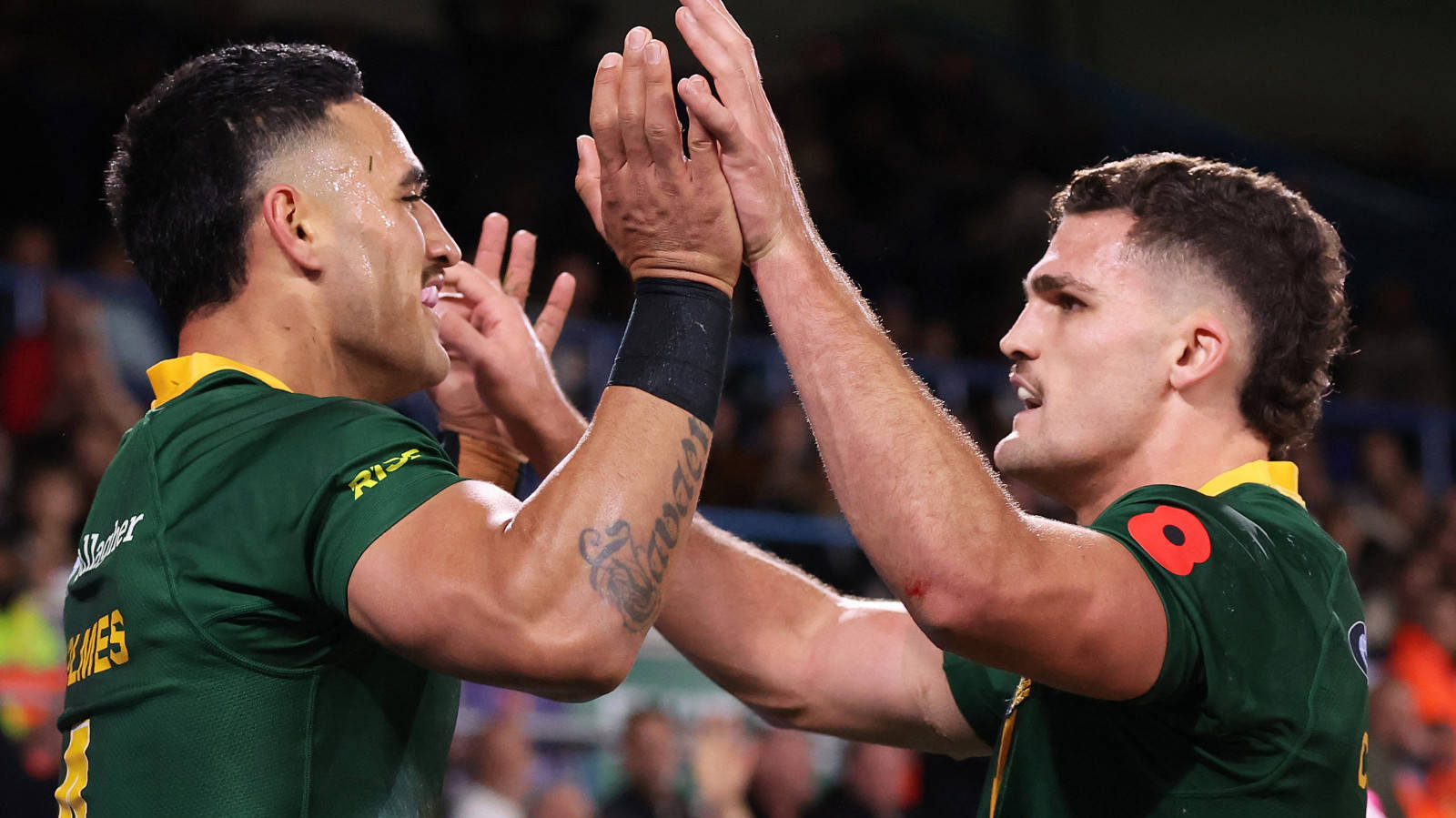 By Josh Graham at Elland Road

Australia will play for their third successive Rugby League World Cup title after beating New Zealand 16-14 in a match for the ages.

Tries from Josh Addo-Carr, Valentine Holmes and Cameron Murray were enough to get the edge of over Michael Maguire’s side who went over through Jahrome Hughes and Dylan Brown but fell short by the barest of margins.

Here are five things we learned under the Friday night lights at Elland Road.

Battle of the skies sets the tone

The first two tries of the match hinged on the aerial battle under the floodlights.

Much had been made about the battle of the two Sydney Roosters playing at full-back and it was New Zealand’s Joey Manu who delivered the first blow.

He leapt above his former clubmate Latrell Mitchell, a centre for the Kangaroos but another No.1 in the NRL for South Sydney, to gather Dylan Brown’s hanging bomb before popping inside for Hughes to score.

But Australia were not to be outdone, Ben Hunt – who had previously sent a kick straight out when searching for a 40:20 – smashed one into the Leeds night sky and unbelievably Addo-Carr sprinted 40 metres in about five seconds to gather and score.

Australia wanted a quick response, good job they've got the fastest man on the planet

Jordan Rapana may have been slightly out of position but you could forgive the Kiwi winger for his bewilderment as the Foxx levelled teammate Valentine Holmes’ record for most tries at a single World Cup with his 12th score.

This spectacular see-saw contest swung on so many fine margins.

Manu was so close to having Jack Wighton held on the goalline before the centre got a remarkable offload off the floor to Holmes for the Kangaroos’ second score.

The Kiwis could have gone at least eight points ahead but Rapana was caught marginally offside before Moses Leota’s good work looked to have put Peta Hiku away for a crucial score after Australia made a mess of cleaning up the kick.

Cameron Murray was in thick of it after rolling off the interchange bench in the second half, giving away a penalty for sparking a melee after James Tedesco had the ball dislodged courtesy of a big hit from Isaiah Papali’i who let the Kangaroos skipper know about it.

Murray struck next though, his perseverance helping him burst through Brandon Smith’s attempted tackle before wriggling over to stretch out for a crucial score, a potential 12-point swing which sapped the Kiwis’ momentum and handed the defending champions the advantage.

New Zealand must have felt things were conspiring against them when a second Hiku effort came back as a no-try with just seven minutes left on the clock.

Rapana’s rip-roaring break set Charnze Nicoll-Klokstad steaming down the left to get the Kiwis motoring but Hughes' grubber was just a shade too long as Hiku grounded the ball on the touchline in-goal.

READ MORE: Bromwich - Semi-final defeat will be too painful to watch back

The big hits came flying in from Mal Meninga’s men with Tino Fa’asuamaleaui forcing Manu to spill the ball before Cazoo Player of the Match Liam Martin’s pearler on big Nelson Asofa-Solomona also won his side a turnover in the second half.

Jordan Rapana’s loose carry early in the count then gave the Kangaroos easy possession and territory, something you simply cannot afford to offer up to such a quality outfit.

New Zealand’s failure to retain possession and inability to complete really hampered them in the second half as they were unable to kick on having led at the break.

This semi-final showdown lived up to all the pre-match hype and more.

Clashes between Australia and New Zealand are always an unmissable event but this took things to the next level.

The noise inside Elland Road said it all as 28,113 people were treated to 80 minutes of high-octane entertainment.

It will be tough for the final to top this, but even if it’s anywhere close, a seat at Old Trafford will be the hottest ticket in town.

Australia will be tough to beat

If England do the business on Saturday they will be looking for revenge for 2017 but whoever the Kangaroos take on at Old Trafford will have the toughest of tasks to upset the odds and lift the trophy.

We knew Australia were in form after swatting aside all before them to this stage but after coming through a nail-biting humdinger against their neighbours they are now battle-hardened.

It will take something extra special to wrestle the trophy from the Kangaroos and prevent a repeat of 2013 when they also claimed the trophy at the Theatre of Dreams.