The Kangaroos edged a pulsating contest against New Zealand in Leeds 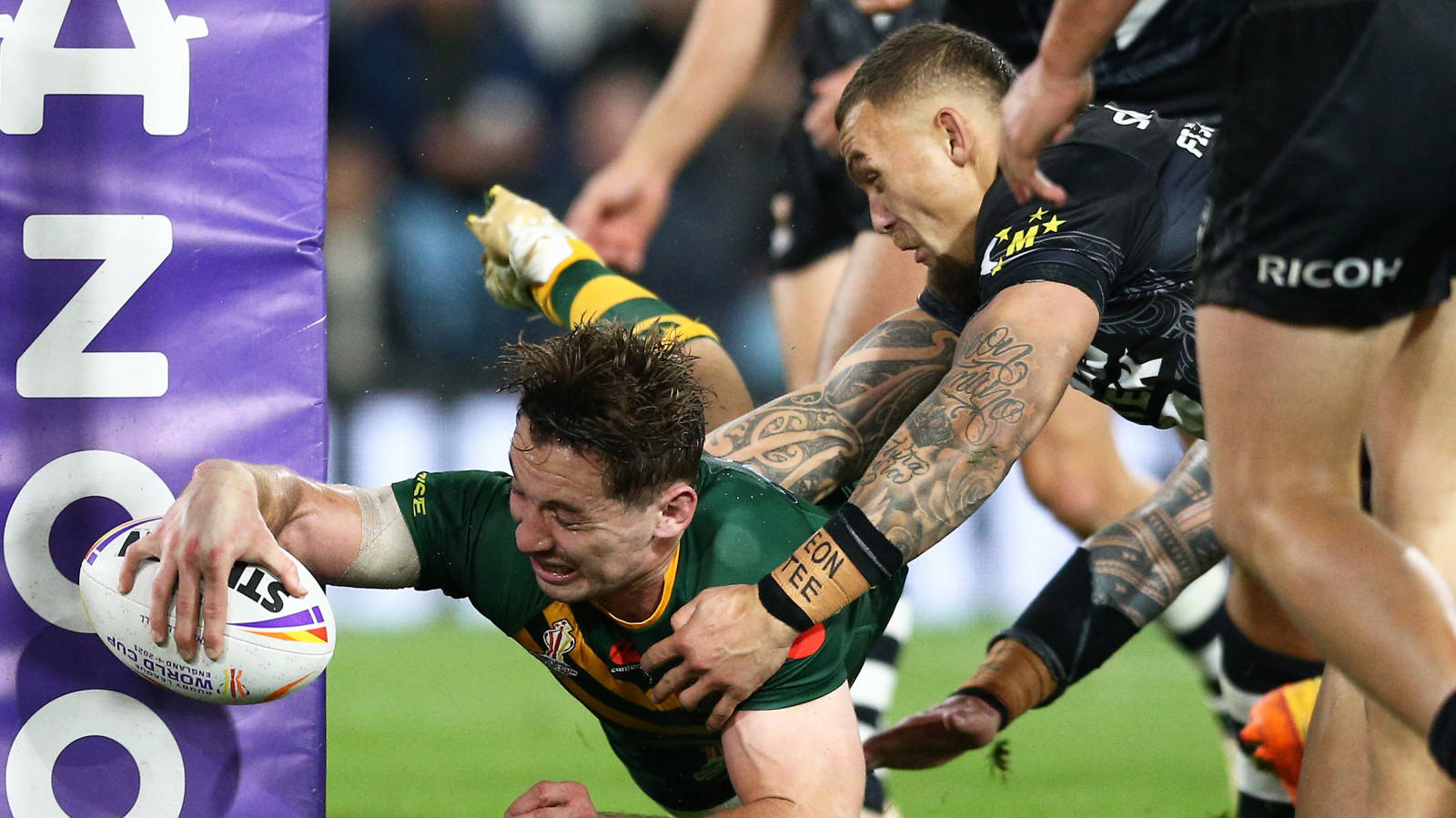 The Kangaroos edged a pulsating contest against New Zealand in Leeds

By Paul Martin at Elland Road

The Kiwis led 14-10 at the break through scores from Jahrome Hughes and Dylan Brown but Murray found a gap on 55 minutes to settle a contest which lived up to the pre-match hype and swung both ways throughout.

New Zealand saw two Peta Hiku tries disallowed in the second half as Australia, for whom Josh Addo-Carr and Valentine Holmes also crossed, continued their record of not missing a men’s World Cup final since 1954.

Much of the pre-match discussion had centred around the full-back battle between James Tedesco and Joey Manu and it was the latter who had the first key involvement as the Kiwis drew first blood on 11 minutes.

Rapana was soon in defensive action, delivering a heavy hit on Addo-Carr, but it left no lasting impact on the flying wing as Australia quickly levelled matters.

Ben Hunt sent the ball skywards from 40 metres out and it landed on a sixpence for the jet-heeled Addo-Carr to dot down on the left for his 12th try of the tournament, equalling teammate Holmes’ 2017 record for the most tries scored in a men’s World Cup.

? Australia wanted a quick response, good job they've got the fastest man on the planet

This time it was Holmes who applied the finishing touch following an incisive run by Jack Wighton, who sold Charnze Nicoll-Klokstad a dummy and offloaded to the Cowboys wing for a try which survived a check by the video referee.

Cleary’s conversion attempt slid across the face of the posts and a pulsating first half had time for one more twist as the Kiwis struck again.

READ MORE: Bromwich - Semi-final defeat will be too painful to watch back

Ronaldo Mulitalo was released down the left and once he had evaded Wighton’s despairing dive, he had time to assess his options and release inside for Brown to run in unopposed.

Rapana’s kick gave Michael Maguire’s side a 14-10 lead at the interval and they thought they had extended it further five minutes into the second half when Hiku crossed following fine work by Moses Leota.

But the try was disallowed for offside, Rapana having been in front of the kicker when boot was put to ball, and the Kangaroos swiftly made the most of their reprieve when awarded a penalty five metres out.

A simple two points were on offer but Australia had bigger plans and when the ball was popped to Murray, he caught the Kiwi defence napping to power under the posts.

? You can't get much closer

There was no let-up in the physicality as the game approached the hour mark, Tino Fa’asuamaleaui crunching into Manu to force a knock-on before Cazoo Player of the Match Liam Martin’s brutal hit on Nelson Asofa-Solomona led to a spot of handbags as the on-field temperate continued to rise.

Harry Grant’s dart was held up by last-ditch Kiwi defending as the Kangaroos interchange looked to inject a spark but New Zealand, who had spent much of the second half defending, soon upped the ante in search of a dramatic late winner.

They were inches away from finding one courtesy of Hiku, who was again denied after he ran out of space, grounding Hughes’ grubber on the touchline.

That proved the last of the Kiwis' chances as Australia held on to seal a ninth win in their last 10 World Cup matches against New Zealand and book their place at Old Trafford next weekend.