Australia sealed top spot in Group B with their victory 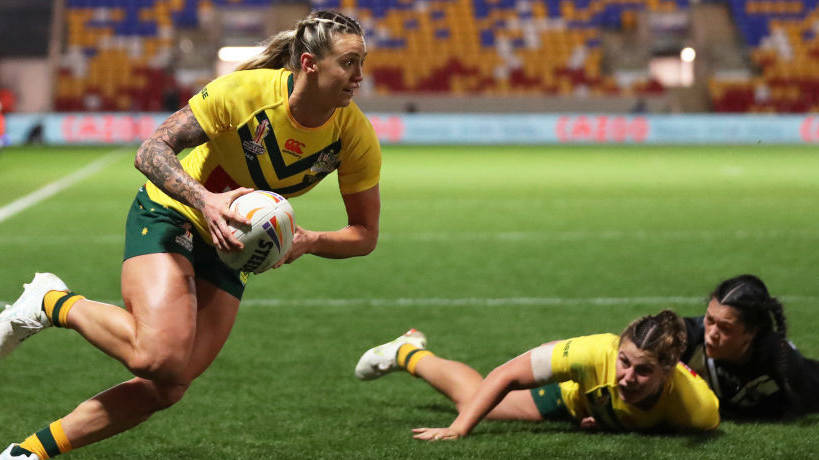 Australia sealed top spot in Group B with their victory

Robinson was joined on the scoreboard by Tarryn Aiken as the Jillaroos set up a semi-final against Papua New Guinea, captain Ali Brigginshaw's boot adding the crucial extra two points.

Apii Nicholls and Autumn-Rain Stephens-Daly crossed for New Zealand, who now face a repeat of their 2017 semi-final against England.

The battle between the only two sides able to call themselves Women’s Rugby League World Cup champions was always going to be tight and so it proved, with ferocious defence from both.

Australia looked the likelier to break through early on but failed to capitalise on their early opportunities, while Katelyn Vaha'akolo twice stormed down the right-hand side at the other end before being unceremoniously dumped into touch.

The Jillaroos received a no try decision in the 16th minute but it didn't stay scoreless for long, Aiken making a line break and powering through the New Zealand defence to put her team ahead, Brigginshaw slotting what turned out to be pivotal extras.

The Kiwi Ferns hit back when a looping kick by Raecene McGregor found Nicholls, who cleanly received and dotted down to mark a successful return to action having missed the win over Cook Islands.

The score marked the first points Australia have conceded in this World Cup but they remained in front at the break due to Brianna Clark’s missed conversion, which saw the Jillaroos go in with a 6-4 advantage.

An impressive break by Sydney Roosters centre Jess Sergis was an early second half highlight but both teams were forced to be patient in the face of stern defence.

An opening soon arrived for New Zealand when a kick on their final tackle count was dropped and Vaha'akolo powered forward, only to be brought down by Robinson, who regained possession for Australia.

But the Kiwi Ferns’ pressure told when Stephens-Daly dived over to give New Zealand the lead for the first time in the game.

?? New Zealand take the lead for the first time in the match!

Going behind spurred Brad Donald's team back into action and they soon re-took the lead when the ball was fed wide to Sergis, who evaded the Kiwi Ferns' clutches and offloaded to Robinson to finish in the right corner.

The Jillaroos had to survive a string of nervy moments in the closing stages but they held firm to stay unbeaten heading into the knockout stage.