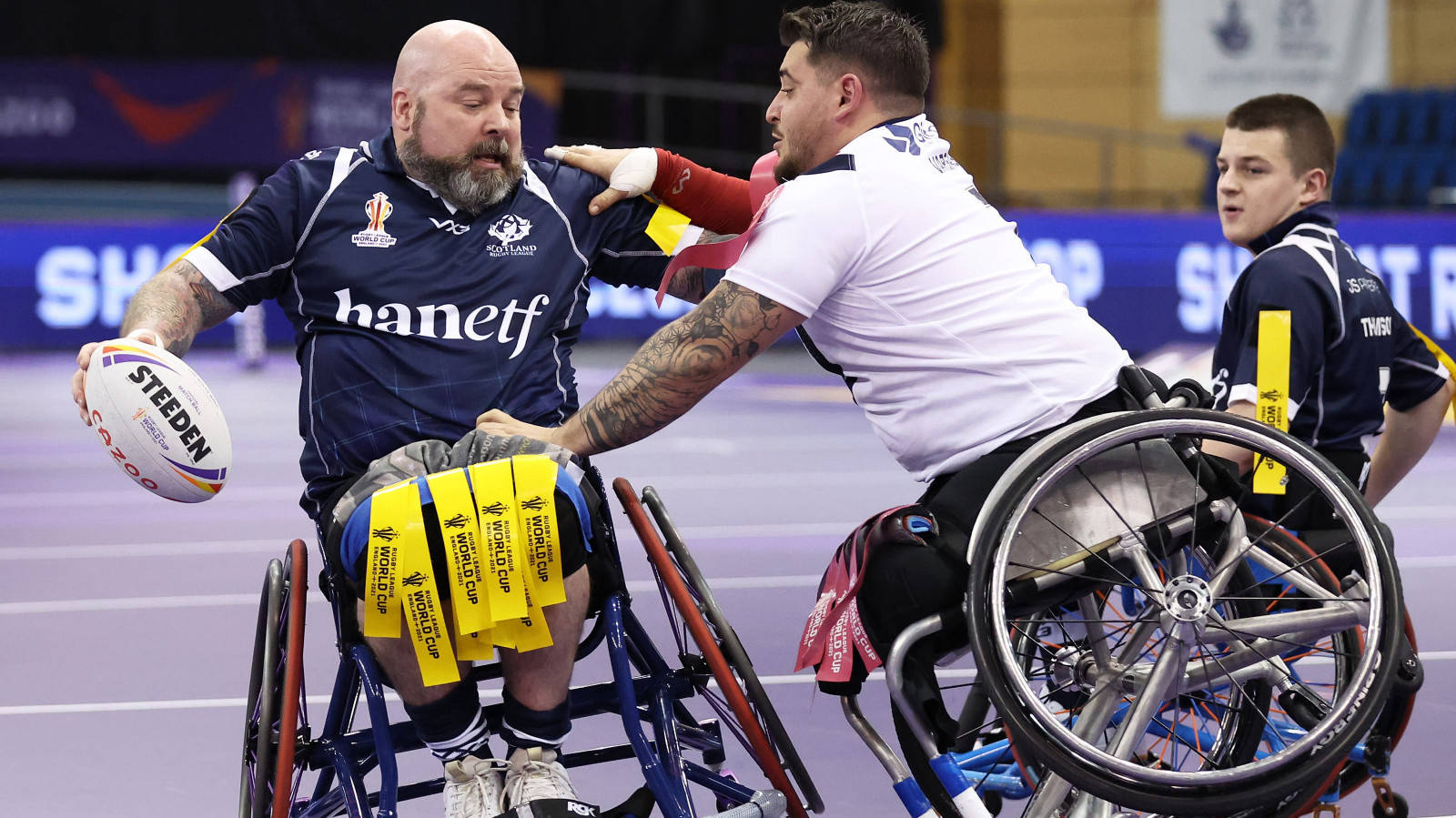 By Jack Lacey-Hatton at EIS Sheffield

Coach Mark Roughsedge said Scotland could take plenty of positives despite an 80-15 defeat to France at the wheelchair Rugby League World Cup.

Scotland went down to a second straight defeat to the reigning world champions but produced an impressive second-half display.

Trailing 50-6 at half-time a brave performance after the interval was rewarded by scoring two of the final three tries and restricting France, the top ranked team in the world, to just one score in the last 20 minutes.

France had seven different try scorers in Sheffield as the two-time winners booked their place in the semi-finals, but struggled to get into their flow at times against a battling Scotland.

Four tries in a big win!

France put on a show again today with a big win over a tough Scottish side – helped by four tries from Nicolas Clausells.

“There are positives we can take from this,” said Roughsedge. “Mainly that we got to practice a lot of what we wanted to do against Wales.

“I thought that the way we controlled and managed the game at times was really good, under some really deep intensity as well from France.

“We can’t play France’s game against them really and I thought our game management was really good.”

Nicolas Clausells was the star of the French show, going over on four occasions to make it 19 Rugby League World Cup tries in his career so far.

The defending champions had already secured a comfortable win over Wales last week and picked up where they left off on their return to Sheffield.

With coach Sylvain Crismanovich wanting to make use of his entire squad, it was one of a trio of players who came into the side who got the ball rolling, Clausells finding the try line inside two minutes.

Clausells quickly scored his second try, but Scotland fought back getting off the mark with a wonderful flowing team try, Callum Young grounding the ball to the delight of their vocal support for his fifth score of the tournament.

With Gilles Clausells starting as interchange, stand-in skipper Guillaume Mautz dotted down in an immediate response for France.

Yann Verdi, Arno Vagas and Mostefa Abassi all went over before the break as Crismanovich’s side started to flex their attacking muscles, Clausells also crossing after covering the pitch to chase down a clever kick over the top.

Some outrageous passing from Scotland and finished off by Callum Young to get their first try of the game.#RLWC2021 | #FRASCO | @BBCSport pic.twitter.com/buPvFpwSlV
— Rugby League World Cup 2021 (@RLWC2021) November 7, 2022

There was more Mautz magic after the interval as he took France through the 50-point mark as he engineered room to ground the ball in the corner.

Scotland were decent in attack against the USA but struggled defensively and that was a reoccurring theme again with the speed of France’s attack often proving a little too quick for the Bravehearts.

Dan Grant did at least get them on the board in the second half with a precise drop goal and Mike Mellon produced arguably the moment of the half, squeezing through white shirts to ground the ball when it looked as if Scotland had been held up.

And to the delight of the crowd they bagged a third try when Grant powered over close to time.

“I think we got under their skin a little bit,” added Roughsedge. “To use a snooker analogy we wanted to be more Peter Ebdon than Ronnie O’Sullivan.

“We’ll pick ourselves up and move forward with the positives from tonight into Wales, which is a huge game for us.”

But it was France’s night and Julien Pennella, Vargas and Abassi also went over in the second half to send another warning that they are still very much the team to beat.

The French join hosts England in having qualified for semi-finals after just two group games, after the hosts secured a 104-12 win over Spain on Sunday.