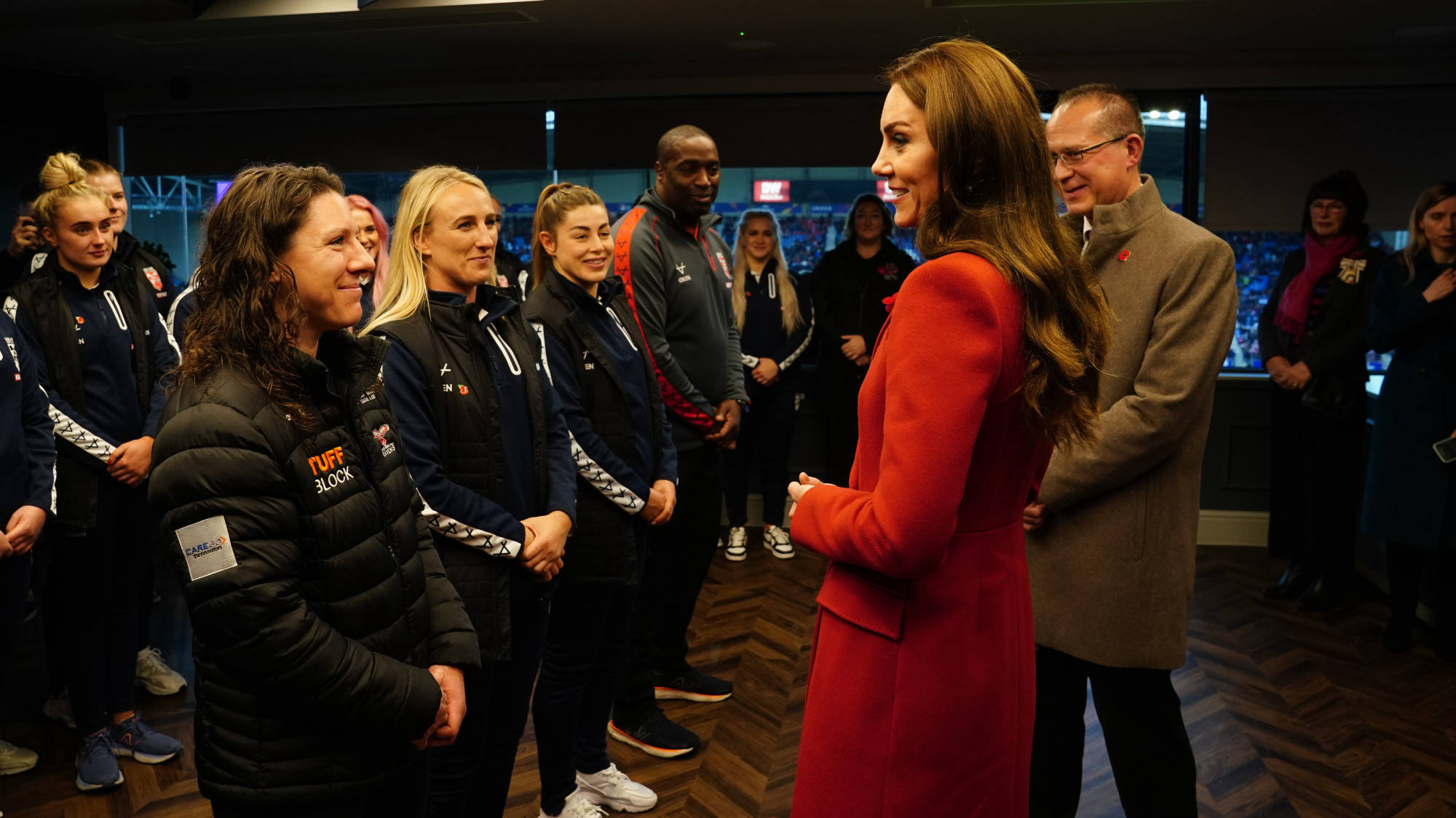 Much has been made of how England are motivating the next generation of players, but Vicky Molyneux explained how their dominant win over Canada had inspired someone higher up.

Alongside the rest of the Lionesses squad, Molyneux met The Rugby Football League patron The Princess of Wales as she attended Saturday’s double-header at the DW Stadium, with the princess revealing the England players were a source of inspiration to her.

The 34-year-old loose forward was named player-of-the-match in England’s 54-4 win over the Ravens that has seen them into the semi-finals after Papua New Guinea defeated Brazil 70-0 in Hull.

“She commended that we all work part-time, full time, some of us are mums and to be so athletic, she seemed quite impressed by the athleticism and the physicality of the game,” mum of one Molyneux said.

“She said she was inspired, and she was really pleased that what we're doing is going to hopefully, inspire that next generation of girls to pick up the rugby ball and step on that field as well.”

How unreal that me and @Jodie_cunny got to sit with HRH Princess of Wales for the second half of ENG vs PNG! ??? So lovely to meet @KensingtonRoyal and chat about our amazing sport RUGBY LEAGUE ??????????? Thank you to @RLWC2021 and @TheRFL for the incredible opportunities ??? pic.twitter.com/OJkG9WXbMV
— Emily Rudge (@emrudge) November 5, 2022

England gained momentum through the game, opening the scoring inside the first minute as they ran in seven tries before half-time.

Tara-Jane Stanley was wayward with the boot, converting five of England’s 11 tries, but found the target with ball in hand, scoring a second-half hat-trick, with Hollie Dodd and Leah Burke also crossing twice each.

The most audacious tries went to Fran Goldthorp and Georgia Roche who both evaded tacklers and sprinted through Canada’s half to score.

Just as momentum built through the game, England are growing through the tournament, with Molyneux explaining how important a good start is not just for their title hopes, but for the sport’s future.

She added: “We knew we needed to win the opening game against Brazil. We do that and then we're getting the backing of followers.

“We're getting people interested in the game and we are here to win. We've worked very hard for a long period of time.

Papua New Guinea and England have secured their places in the semi-finals!

“We've got such confidence in the backroom staff, the coaches, but the girls who came in today, regardless of playing position, one to 24, we can make changes and still do a decent job.

“We're here to set our stall out and hopefully get some silverware at the end of it.”

Head coach Craig Richards included all seven players who missed out on England’s 72-4 win over Brazil and admitted his relief that the changes did not result in a drop in quality.

He said: "It's always the big decisions that are the hardest and when you have to rotate the squad because of the nature of the competition, it brings a bit of nervousness.

? What a second-half from Tara Stanley!

“I thought the players that came in did really well in particular, they were lead well by people like Vicky [Molyneux].

“Really pleased with just about everything that the girls did. There is still a bit of work to be done.

“When you make a lot of changes, when you have the rotations that I made in that game, it's never going to be fluent, so to score the points we did and defend the way we did is just fantastic.”