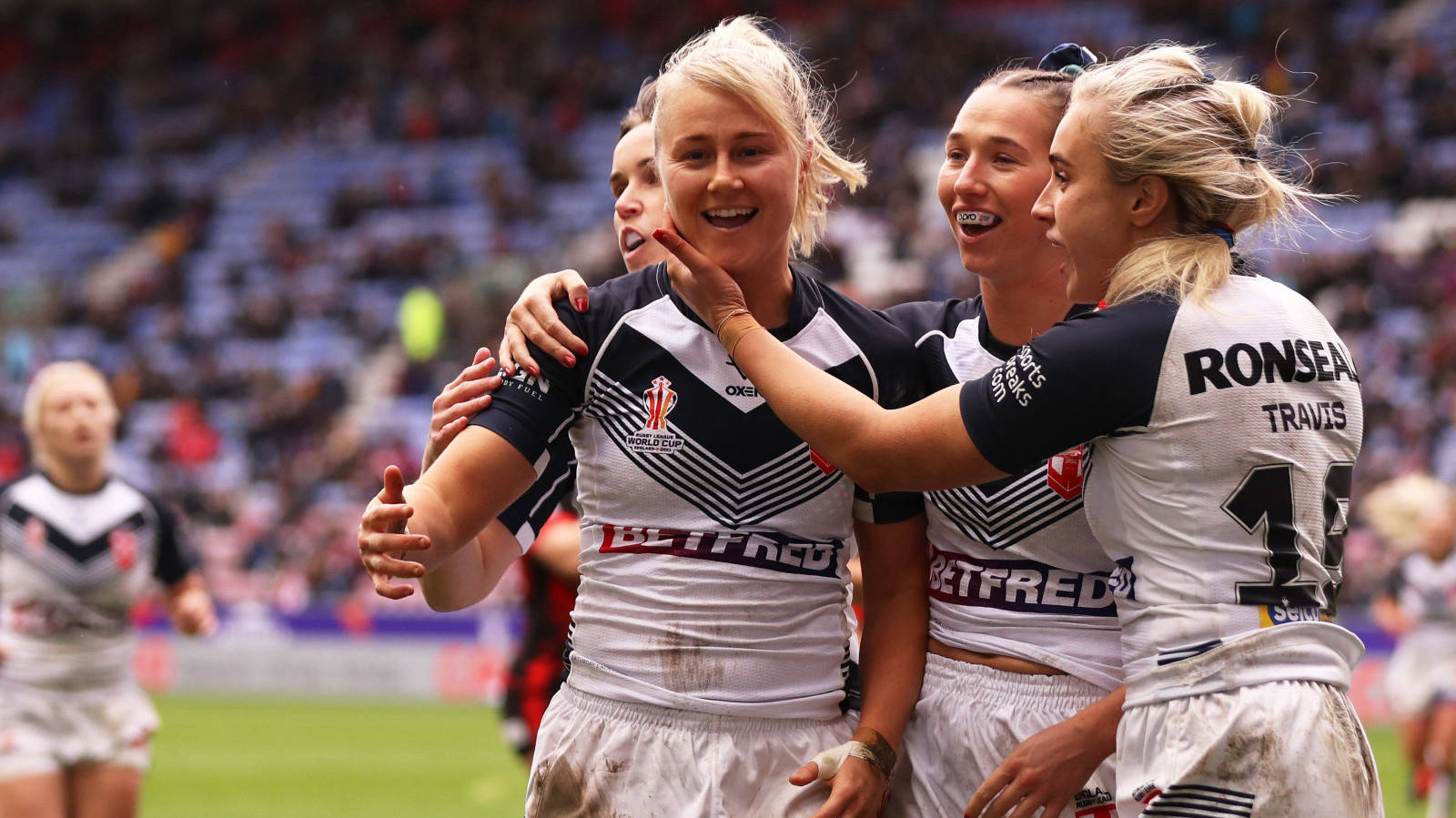 Tara-Jane Stanley’s second-half hat-trick edged England closer to a semi-final spot with a 54-4 win over Canada at Wigan.

Despite a try inside 45 seconds, England had to be patient in the first half, Fran Goldthorp and Georgia Roche were eventually allowed to stretch their legs with powerful runs to the line.

Hollie Dodd was joined by Stanley and Leah Burke in scoring multiple times with Petra Woods’ try only a consolation for the Ravens.

Any nerves England had as they kicked off a double-header at the DW Stadium were settled in the first minute as former gymnast Leah Burke leapt over the try line to open the scoring.

Tara Jane Stanley gets over for the her second of the half, after shrugging off the Canadian defence.#RLWC2021 | #ENGCAN | @BBCSport pic.twitter.com/zdQbILMG1C
— Rugby League World Cup 2021 (@RLWC2021) November 5, 2022

Canada then enjoyed their best possession of the half, coming closest to scoring through Ada Okonkwo, who was stopped just short of the line.

The Ravens attempts to slow the game only lasted so long as Dodd’s first World Cup try got the gears moving for England, the second-row mopping up a scruffy pass and dummying the defence to get their second.

Three minutes later and England were in again, this time through Georgia Wilson who held onto a high kick from Courtney Winfield-Hill before dotting down as Stanley kicked her first conversion of the afternoon.

Dodd got her second of the match after great work from Roche which would become a feature of the day.

Roche sent a quick pass to set up an easy finish for Dodd and an even easier conversion for Stanley.
England’s finest of the first half came eight minutes from the half as Goldthorp weaved 25 metres to the try line for the hosts’ fifth of the first 40 minutes.

Roche was not to be outdone, however, setting off on her own run from 40 metres out and making a dummy pass to deceive defenders, whose outstretched hands were flicked away by Roche’s lightning feet as she sprinted to the line for the last score of the half.

It was as you were to start the second half, England crossing in the 41st minute through Stanley, Roche again involved after Vicky Whitfield had used her speed and power to drive England forward.

The hosts could now afford to take risks and Stanley definitely did, ignoring options to her left and right as she muscled her way out of a tackle from Brittany Jones and Sab McDaid to score her second in four minutes.

Canada had a response this time, the Raven's skipper Gabrielle Hindley shrugging off tackles to pass to Woods who did the same to score her side’s first and only try.

It did not halt England entirely as Carrie Roberts crossed for her first of the game, benefitting from space opened up by a trademark Goldthorp run.

Stanley’s hat-trick was wrapped up within 20 minutes of the second half, England working the ball wide through Goldthorp as Stanley’s successful conversion moved England to their half-century.

Burke added her name to the scoresheet for a second time but Winfield-Hill earnt the plaudits as she set embarked on a mazy run deep into Canada’s half before sending a kick into Burke's path for the final score of the game.