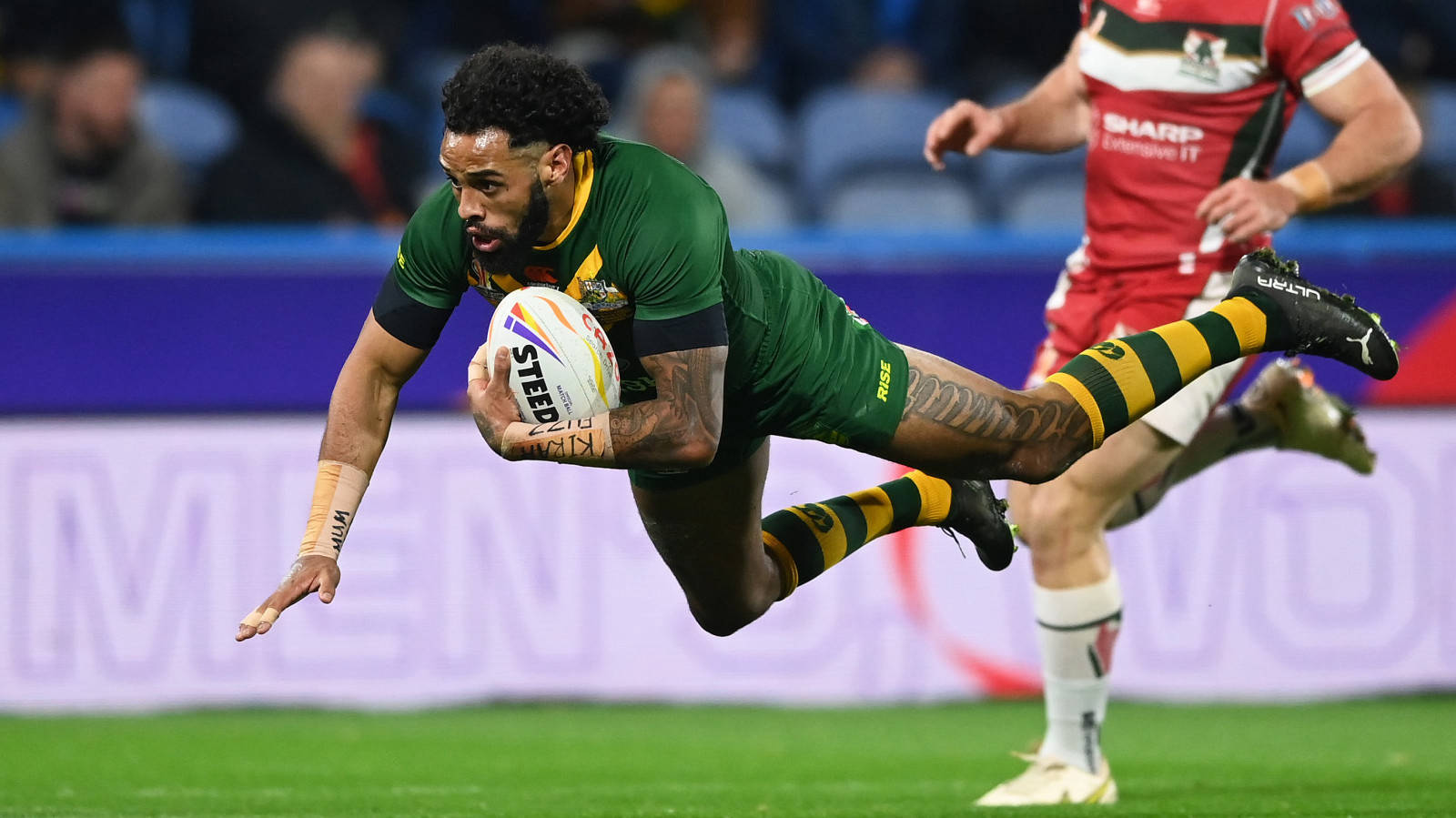 By Jack Lacey-Hatton at the John Smith's Stadium

Five-star Josh Addo-Carr helped Australia east past Lebanon 48-4 and maintain their defence of the Rugby League World Cup in Huddersfield.

The Foxx produced a clinical display, scoring five tries, including a first half hat-trick inside 19 minutes, as the Kangaroos opening quarter onslaught set them on course for the last four.

Addo-Carr’s flying start was backed-up by South Sydney duo Latrell Mitchell and Cameron Murray who also dotted down in the opening 40.

Mal Meninga’s team were at their fluent best for much of the first half, with Liam Martin completing the job late on with the second half show less stellar.

The Foxx is on fire!

However, the defending champions still sent a clear warning to the other tournament contenders that they remain the team to beat, booking a semi-final meeting with either New Zealand or Fiji at Elland Road next weekend.

Lebanon had been hopeful of showing the form that saw them give New Zealand a scare and comfortably beat both Ireland and Jamaica earlier in the tournament.

Michael Cheika’s team did show glimpses of those performances for a short period in the second half but were on the back foot from the early stages after Australia’s lightning start.

However, their run to the quarter-final also ensures they will be back in 2025, and the players left Yorkshire with heads held high having contributed hugely to the group stages.

Australia had made five changes from the team that won their final group match against Italy but showed no signs of lacking cohesion from the opening hooter.

And it was their flying winger Addo-Carr who set the tone, evading Lebanon’s Josh Mansour in the corner for the opening score, confirmed after a quick check with the video referee.

The Foxx revisited the whitewash after a brilliant linebreak from James Tedesco gave him an easy task.

And he had the hat-trick score when Jacob Kiraz claimed the ball out of the sky only to be robbed by Cameron Munster, Addo-Carr diving over to become the current leading try-scorer in the men’s tournament.

Mitchell barged over for the fourth Kangaroo try before his club teammate Murray, fresh from the bench, added two more inside three minutes.

The only minor downside to the first half for the defending champions was that Nathan Cleary could only add three conversions.

A handling error from Mansour gave Australia their first successful attacking raid of the second half, with the Foxx once again getting the score to move into double figures for the tournament.

Lebanon deservedly got on the scoreboard when Mitch Moses clever grubber kick found Mansour, the winger claiming his fifth try of the tournament and temporarily raising the roof at a chilly Kirklees Stadium.

But player of the match Addo-Carr responded in trademark fashion but his fifth try of the evening, chasing down Munster’s kick.

Martin then added to the scoreboard after the video referee deemed the second-row had ground the ball successfully, to complete a comfortable nights work for the Kangaroos.