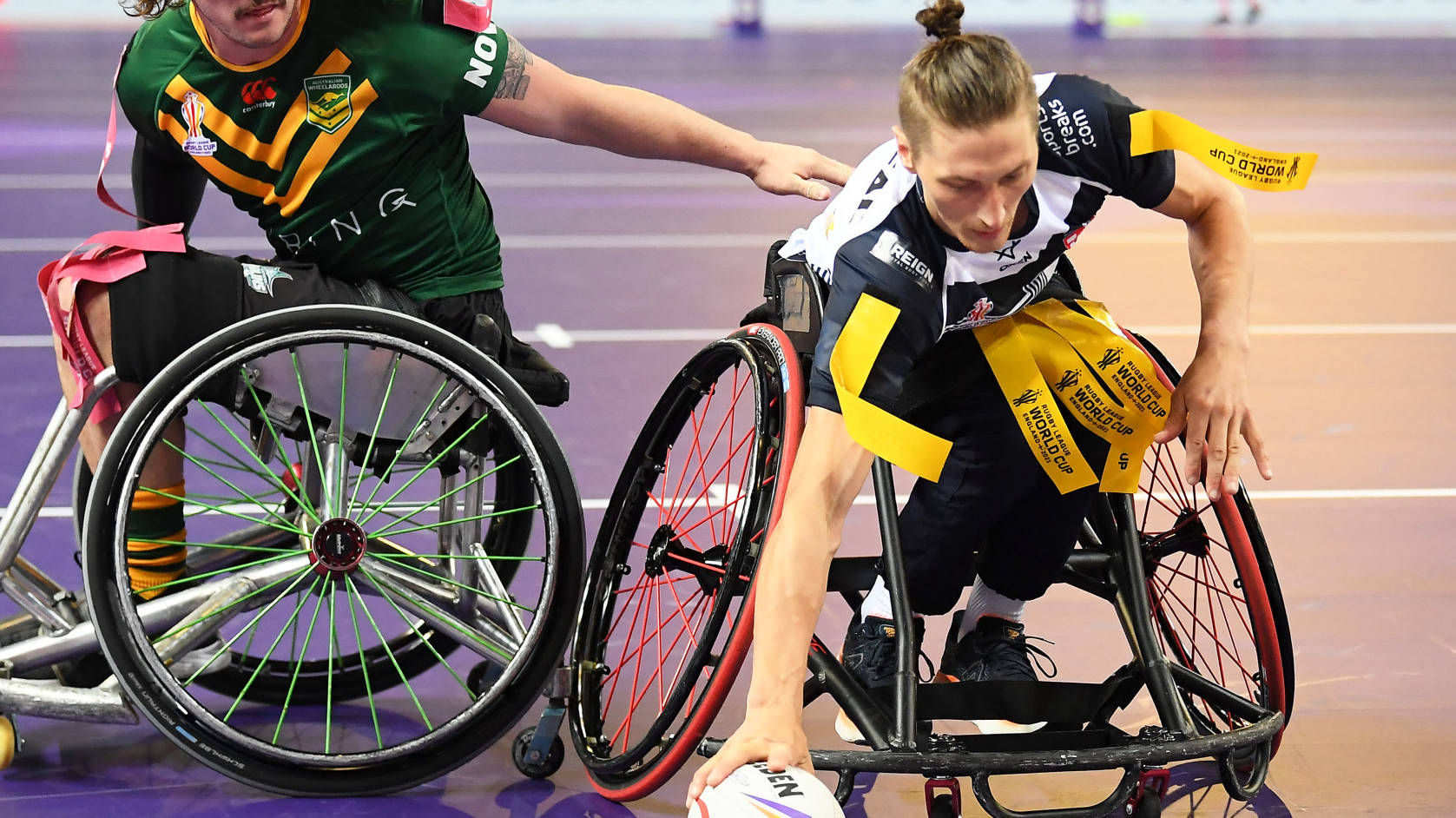 By Josh Graham at the Copper Box Arena

Jack Brown believes England showed they mean business at the wheelchair Rugby League World Cup after orchestrating an inside job to beat Australia 32-8 in front of a raucous and record-breaking Copper Box crowd.

Brown lives in Townsville and coaches the Queensland State of Origin side but after England went behind, he came off the interchange bench to score two tries and hand six of the players he works with Down Under an opening World Cup defeat.

Joe Coyd – brother of coach Tom – scored two in three minutes to get England motoring after Diab Karim stunned the hosts inside 10 minutes, but Brown and Nathan Collins scored doubles with Lewis King also dotting down as England reeled off 32 unanswered points to ease to victory.

“That was a really important win, it really sets the tone for the tournament and shows England are here and this is what we are about,” said Brown, playing in his fourth World Cup.

“There’s been a bit of back and forth between us. They’ve been playing with me for so long as well, so they know the way I play.

“There’s six of them and one of me, the only difference is I had these boys to back me up.”

England’s next opponents Spain beat Ireland 55-32 to warm up those in the stands in Stratford before a world record attendance of 3,033 for a wheelchair rugby league game watched the hosts kickstart their campaign.

The Wheelaroos have been constantly improving since these two last met in 2019 and they got off to a flyer when Karim’s chip and chase fell kindly into his hands in the corner, sparking wild celebrations from the Australians.

After several near misses, England finally got on the board thanks to Coyd’s perseverance as he jinked his way over for two in quick succession.

Brown got the third to get the crowd going before Collins converted his own score and landed a penalty to give the tournament favourites a 26-6 lead at half-time.

A beaut of a pass!

Australia upped the ante after the break with some crunching hits flying in, coach Brett Clark insisting they do not mind being called ‘bullies’ for what he preferred to describe as ‘high intensity’ play.

The Wheelaroos were foiled as they worked the ball left, but England had no such problem as Lewis King registered his side’s sixth score with Collins converting to make it 32-6.

Brown, the leading try scorer in World Cup history, cannot see England slipping up in pursuit of their first world title since 2008 and insisted he would never withhold information from his Australian players to benefit the national side as everyone has a duty to grow the game.

He explained: “We said we wanted to come and put on a good show and wanted to live up to the hype and I think we’ve done a great job of that.

“We’ve got a job to do at the end of the day and that’s build this sport to something magical that we believe it is.

“I don’t believe in holding something back if it’s going to develop the sport.”

Australia captain Brad Grove was pleased to see his side throw their weight around after progressing from a developing nation to genuine title contenders in the last five years.

“In the past we’ve been a developing country but now we have got the size to come out and be a bit more aggressive,” said Grove who leads his side into a clash with Ireland next.

“This time around we’ve got that solid strength to push through and it showed tonight. I’m impressed with how the boys went. It’s a spectator sport we just need more eyes on it.”