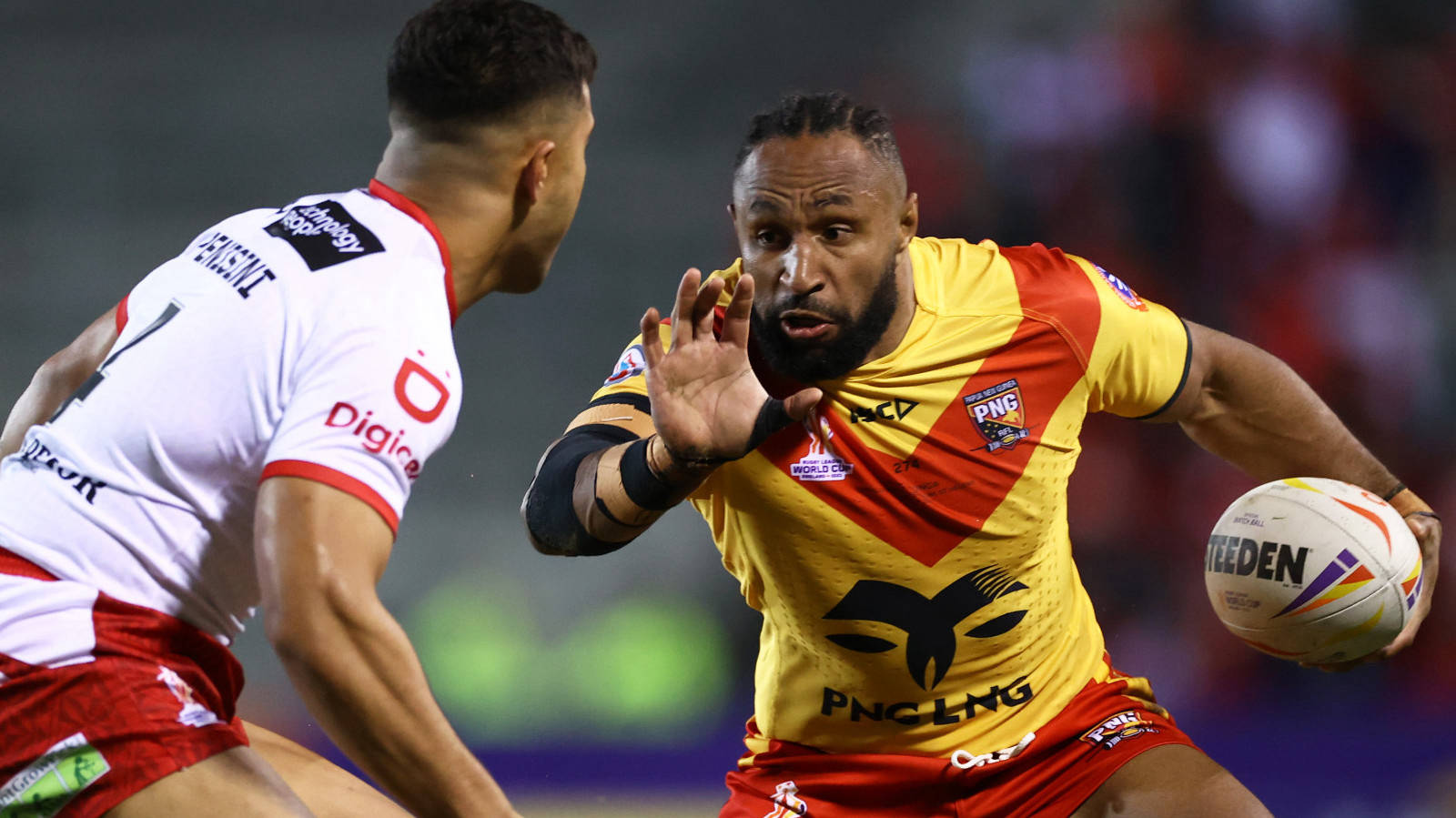 Stanley Tepend knows just how to fire his side up for their quarter-final showdown with England - by showing them a video nasty from their clash five years ago.

England swatted aside Papua New Guinea's challenge in Melbourne at the same stage of the 2017 Rugby League World Cup, in a match that could hardly be described as a classic.

Tapend's side barely fired a shot in the scrappy 36-6 encounter, opportunities were created but not converted as a far from fluent England maintained their unbeaten head-to-head record with a third straight win over their rivals.

This time around - as the sides prepare to clash at Wigan's DW Stadium on Saturday - and Tepend is convinced the lesson has been learned.

"We are ready for England and we certainly have learnt from that quarter-final defeat," he said.

"We have a smarter and younger side who are playing at the top level in Australia and England in the NRL and Super League and also in PNG too.

"They've all brought great form into the World Cup. It's been easy to bring them into the Kumuls set-up because they are more seasoned at this level.

"Five years ago, I felt this was a side of individuals. Now we are a team and there is a really good feeling in the camp."

Tepend has named eight players in his matchday squad that starred in the Kumuls’ shock 28-10 victory over Great Britain  in Port Moresby three years ago.

Although just four of Shaun Wane's England side have the scars from that bruising encounter, which left the Lions with four defeats from four in an ill-fated southern hemisphere adventure.

READ MORE: What are the teams for England v Papua New Guinea men in the Rugby League World Cup quarter-final?

"Looking back at the 2019 victory over Great Britain, it does give you some confidence, but it's a totally different environment now, a different team, a different tournament and away from home too," added Tepend, whose cause is aided by the return to fitness of rising star Sylvester Namo and Watson Boas.

"Some of the boys played in that game, so they want that same feeling they had then this week. That was in PNG, but we will be away from home this time. We will prepare ourselves the best we can and see what happens."

Melbourne Storm centre Justin Olam scored a try in that win over Great Britain but insists PNG have nothing to lose as they seek a first win over England at their fourth attempt.

"England are a very good team, they have been playing really well and they have a big home advantage, as we had in 2019," he said.

"Our focus this week has been doing what we can to upset them, we know the challenge, but we're focused."

Meanwhile, legend Martin Offiah believes England will prove too strong for the Kumuls, especially with captain Sam Tomkins, Tommy Makinson and tournament star Dom Young reunited in the back three.

"Papua New Guinea will be a big test in Wigan on Saturday, no doubt about it," said Offiah, who is supporting the RLWC2021 CreatedBy Grants Programme, which has seen over £750,000 of financial support provided to clubs and communities across England, in association with the National Lottery.

"They have got players who can hurt you and England have to go into the game with the mindset that they’re killers.

"All the Antipodean sides look to be getting stronger as the tournament goes on. It really is going to be a hard game."

Offiah admits he's been flattered by comparisons to NRL star Young, who is preferred to England's record try-scorer Ryan Hall after banking eight tries in the group stages to top the tournament standings.

"I love watching Dom. Every time I do they seem to mention my name," he added.

"My message to Dom Young is whatever I or anybody else thinks or says, positive or negative, is irrelevant, the only thing that matters is what he believes and feels is important."