Bremner: Focus the key for Australia to retain World Cup 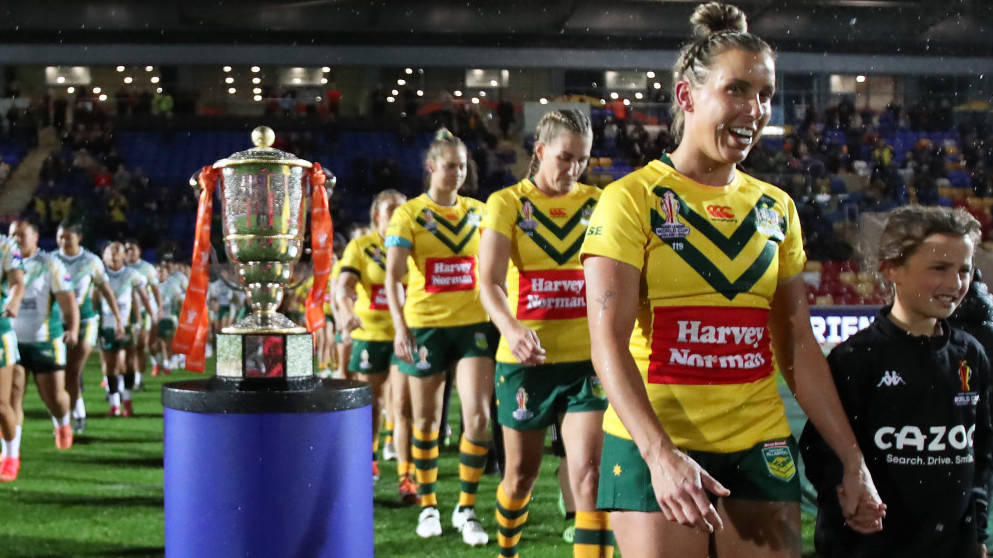 Bremner: Focus the key for Australia to retain World Cup

Sammy Bremner believes that the raging determination of her Australia teammates will win them a third consecutive World Cup.

The Jillaroos finally got their title defence off to a roaring start with a 74-0 victory over Cook Islands on a windy night in York, having waited an extra year after the Covid delay.

Player of the match Bremner crossed the line four times herself and Evania Pelite collected a hat-trick on debut as Australia ran in an incredible 14 tries to leapfrog New Zealand, who beat France 46-0 in the opening fixture of the double header, at the top of Group B.

Co-captain Bremner, who took two years out of the game since the last World Cup to become a mother, praised both her teammates' ability to put her in the position to score tries but also their single-mindedness in the pursuit of glory.

She said: "It's been a long couple of weeks and couple of years, but all the girls have continued to focus on being the best players they can be.

"So it's a credit to our players, that if we stay focused, we can definitely win this World Cup.

"I'm privileged to be in this position where I can play at this level but really all I do is follow my teammates around and try and finish it off to reward them for all their hard work.

"There are positions that have so much competition in Australia and I'm privileged to be in those full-back conversations and it's definitely made me a better player.

"There are so many contributing factors that got me back on the pitch but it's mostly my two teams, the one and home and the Jillaroos.

"Time away from has given me appreciation for the game so I had so much pride today."

Cook Islands head coach Anthony 'Rusty' Matua admitted they were expecting a tough test against the reigning champions but felt his side were slightly overawed up against the supreme Jillaroos, only troubling them slightly in the closing stages of both halves.

But Matua urged his players to drop any frustration from tonight's performance and look ahead to further tests against their next Group B opponents and three-times champions New Zealand.

He said: "I was expecting that level of intensity. It took us the whole 40 minutes to counter them and I think we were better in the second half.

"Full credit to Australia, I mean they really humbled us tonight and showed their strength they really are an amazing team.

"They've got the resources of the NRLW and multi million dollars, while we met the night before the England [warm-up] game for our prep which has been really hard.

"So you do just have amateurs against full-time professionals.

"At half-time, I just told them to reset and get back to those basics, I think the girls are disappointed in themselves in that regard but that's what we will be looking to change ahead of the Kiwis."