What are the teams for Australia v Lebanon men at the Rugby League World Cup?

All the squad details as the Kangaroos and the Cedars kick off the men’s quarter-finals. 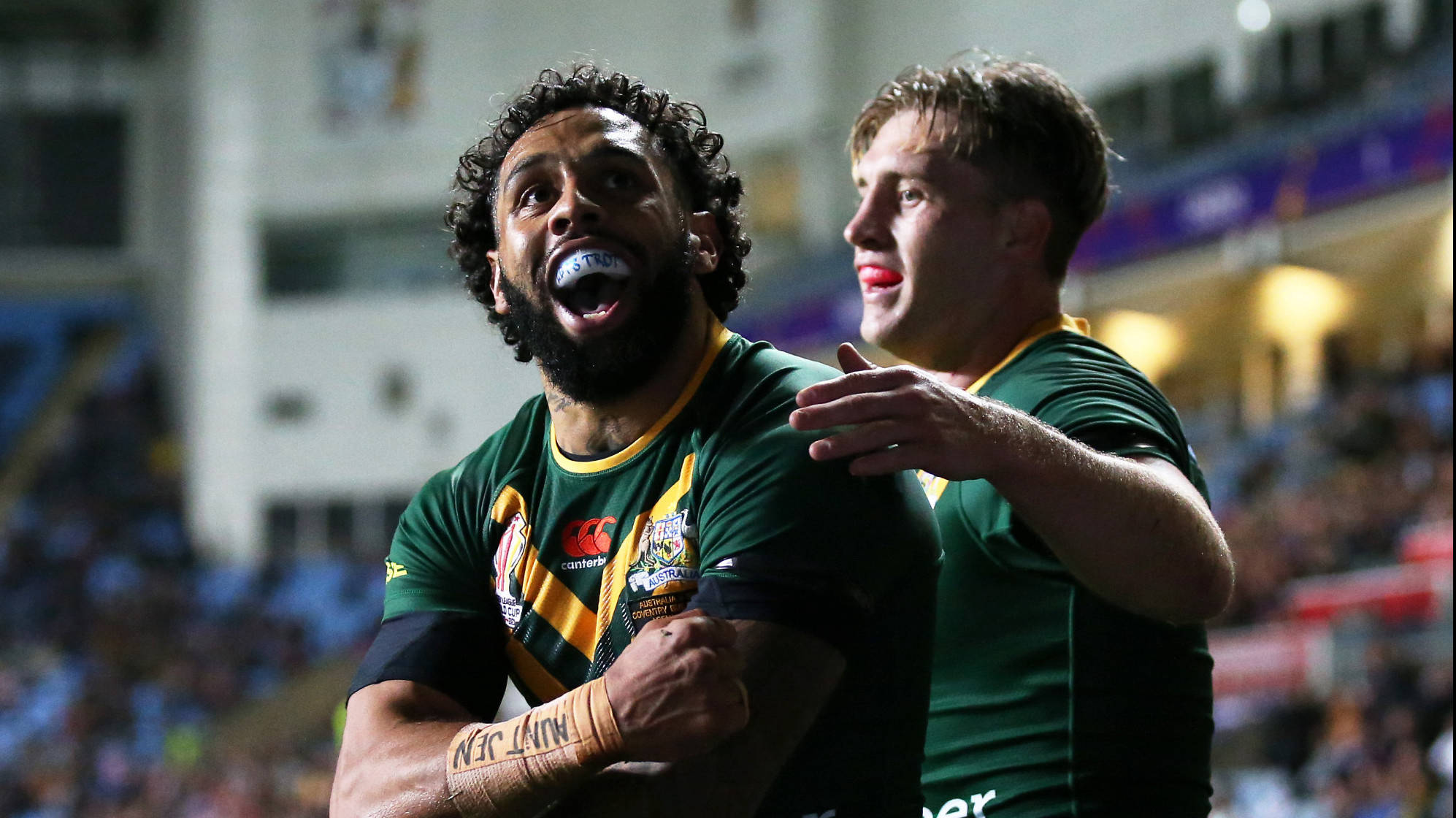 What are the teams for Australia v Lebanon men at the Rugby League World Cup?

All the squad details as the Kangaroos and the Cedars kick off the men’s quarter-finals.

We are no closer to knowing for sure who will be Australia’s starting scrum-half with both Nathan Cleary and Daly Cherry-Evans selected in Mal Meninga's 19-man squad as the Kangaroos prepare to take on Lebanon in the first quarter-final of the men’s competition.

Defending champions Australia have made six changes from their 66-6 win over Italy to top Group B as try-machine Josh Addo-Carr returns alongside stand-off Cameron Munster.

Harry Grant is the only specialist hooker selected with Ben Hunt left out having played all three group games, which could mean Cleary has done enough to be the starting No.7 with Cherry-Evans introduced from the interchange bench as both halves and hooker cover.

Lebanon have welcomed full-back Jacob Kiraz back into the fold after he missed their 72-14 win over Jamaica due to concussion protocols.

Kayne Kalache has also returned to the 19-man squad as Tony Maroun and Mikey Tannous make way having both scored against Jamaica.

With Manly half-back Cherry-Evans training at dummy-half during the week it appears Cleary will start at scrum-half alongside Munster for the Kangaroos.

That sets up a tantalising clash between Cedars skipper Mitchell Moses and Cleary, with the two quality operators set to face off in a second finals match in as many months after Cleary’s Penrith Panthers defeated Moses’ Parramatta Eels in the NRL Grand Final in October.

Moses will be out for revenge for that defeat but is also fired up having missed out on the Kangaroos' 24-man squad himself despite enjoying a superb domestic season.

The other key battle is likely to be on the wings where both sides have proved exceptionally strong so far.

Bulldogs flyer Josh Addo-Carr has been one of the stars of the tournament with six tries in two games and while his position on one flank is secure the other is still up for grabs for those wearing green and gold.

Valentine Holmes, predominantly a centre, could be used there having trained out wide with Murray Taulagi omitted and Campbell Graham another option having impressed against the Bravehearts and the Azzurri with five tries, 11 tackle breaks, five line breaks and 314 metres.

The Cedars are also blessed on the edge with Josh Mansour having bagged a hat-trick and Wigan's Abbas Miski crossing for a double last time out against the Reggae Warriors, meaning the two are bang in form for the big one.

Where the match will be won?

It is a daunting prospect for any side to take on Australia with an embarrassment of riches in any 17 Meninga decides to pick.

The best of the best from the NRL will be in wait for the Cedars but crafty coach Michael Cheika will have a clear game plan to try and upset the odds and pull off one of the biggest shocks in Rugby League World Cup history.

If Australia's forwards make big inroads and get them down the field easily, then Lebanon will be on the back foot from the off.

But if the underdogs can ruffle a few feathers in the middle, pull out a few big shots and slow down the ruck then they have a chance of hindering the Kangaroos' lethal attack.

Melbourne nine Grant is almost unstoppable on the front foot but with a well-set defence and plenty of pressure he will be unable to influence proceedings to the extent he has done so far on English soil.

Australia and Lebanon have met only once before in internationals, at the last edition of the World Cup.

The Cedars failed to register a point in their Group A encounter as the Kangaroos came away 34-0 winners on their way to claiming the trophy.

Lebanon still made it out of the pools for the first time in their history before losing to Tonga 24-22 in the last eight.

Josh Mansour played for Australia the last time the two sides faced off in the 2017 World Cup but will run out for Lebanon on Friday.

Australia have won 68 games at World Cup, 19 more games than Lebanon have played in their international history.

The Cedars have played 49 internationals, 10 at the World Cup, winning 30 of them, while Australia have won 15 World Cup matches in a row.

The Kangaroos conceded first against Fiji in their opening game of this tournament before winning 42-8 and backed that up with a ruthless 84-0 triumph over Scotland.

Meninga's men guaranteed their status as Group B winners with a 66-6 win over Italy in Round 3 to tee up the Lebanon last-eight showdown.

The Cedars’ victory over Jamaica marked the first time in their history they have won back-to-back matches at a World Cup.

They bounced back from an opening defeat to New Zealand to beat Ireland before putting more than 70 points past the Reggae Warriors.