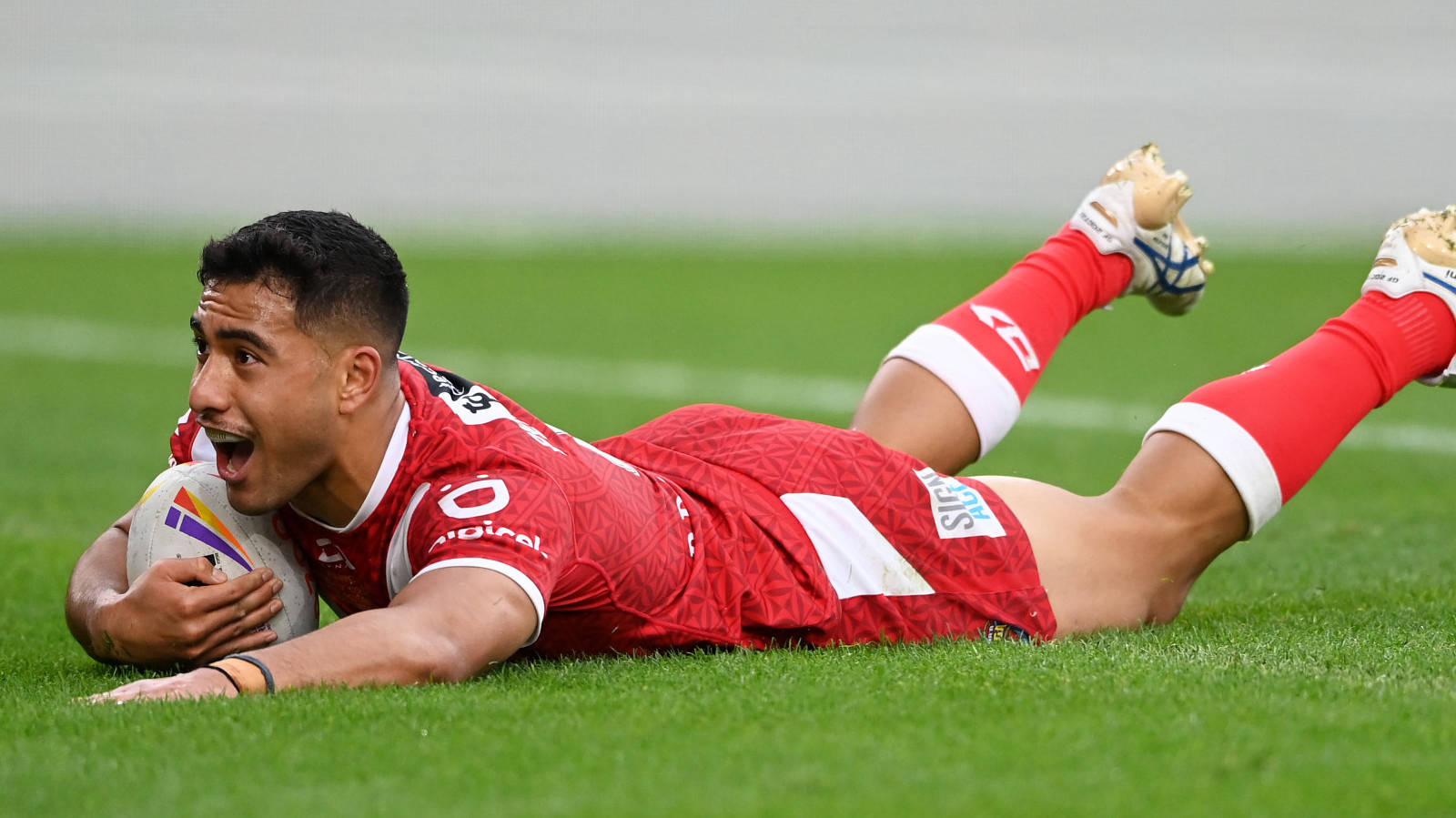 Captain Jason Taumalolo’s thunderous return and four tries for Will Penisini propelled Tonga into the quarter-finals after a record-breaking 92-10 victory over Cook Islands.

Taumalolo had to wait to make his impact after missing the first two matches through suspension, but he announced his arrival in style with two of his side’s 16 tries as Tonga recorded their highest points tally ever, eclipsing the 66-18 defeat of South Africa in the 2000 World Cup.

Teenage half-back Isaiya Katoa bagged a 30-point haul as a hat-trick for Tesi Niu plus doubles for Daniel Tupou and Tui Lolohea helped Kristian Woolf’s side hit their stride in Middlesbrough.

The 2017 semi-finalists secured top spot in Group D with their best performance to date after unconvincing wins over Papua New Guinea and Wales and will face the winner of this evening’s clash between Samoa and France next weekend for a place in the semi-finals.

Tonga flew out of the blocks as Katoa raced clear down the left before feeding veteran winger Tupou for the opening score after just 49 seconds.

The Kukis thought they had levelled affairs inside ten minutes when Paul Ulberg raced clear only for the try to be chalked off for a knock-on.

Woolf’s men went further ahead when loose forward Taumalolo used all his considerable power to blast his way over the top of the Cook Islands defence.

Taumalolo continued to throw his weight around and landed his second try in seven minutes when he picked up a wayward pass before skipping over to at last make his mark on this tournament.

Fellow NRL star Felise Kaufusi was the next to break the Cook Islands line, taking captain Brad Takairangi on the outside before passing inside to full-back Niu who applied a simple finish.

Centre Penisini was the beneficiary of hooker Soni Luke’s crafty no-look grubber for Tonga’s fifth try before Niu picked up his second after getting on the end of Mosese Suli’s perfectly-weighted kick back inside.

Penisini and Sione Katoa linked up superbly down the right and only an early tackle from Tevin Arona prevented a certain score with a penalty try being awarded to the former to move Tonga 40-0 ahead.

Huddersfield’s Lolohea got in on the act thanks to his footballing skills before Kaufusi cut a great line to bring up the half-century on the stroke of half-time.

It took four second-half minutes for the floodgates to open again as Isaiya Katoa got through a gap after Tonga kept the ball alive on the right edge.

Suli’s mazy run downfield teed Niu up for his hat-trick score and Tonga’s 11th as Cook Islands failed to muster any form of response.

Talatau Amone was caught just short of a lung-busting long-distance special before quick-thinking from Lolohea saw him dart over by the ruck for his second.

Lolohea turned provider to gift Penisini a hat-trick before Sydney Rooster Tupou glided in for his second.

Cook Islands finally showed signs of life with 11 minutes to go as Steve Marsters squeezed in at the corner under heavy pressure.

Penisini’s belligerence earned him a fourth before Amone went under the posts.

However, the Kukis had the last say before they bowed out following this one-sided affair as Takairangi intercepted Niu’s pass before passing to prop Tinirau Arona over the line, who was allowed to convert his own score.