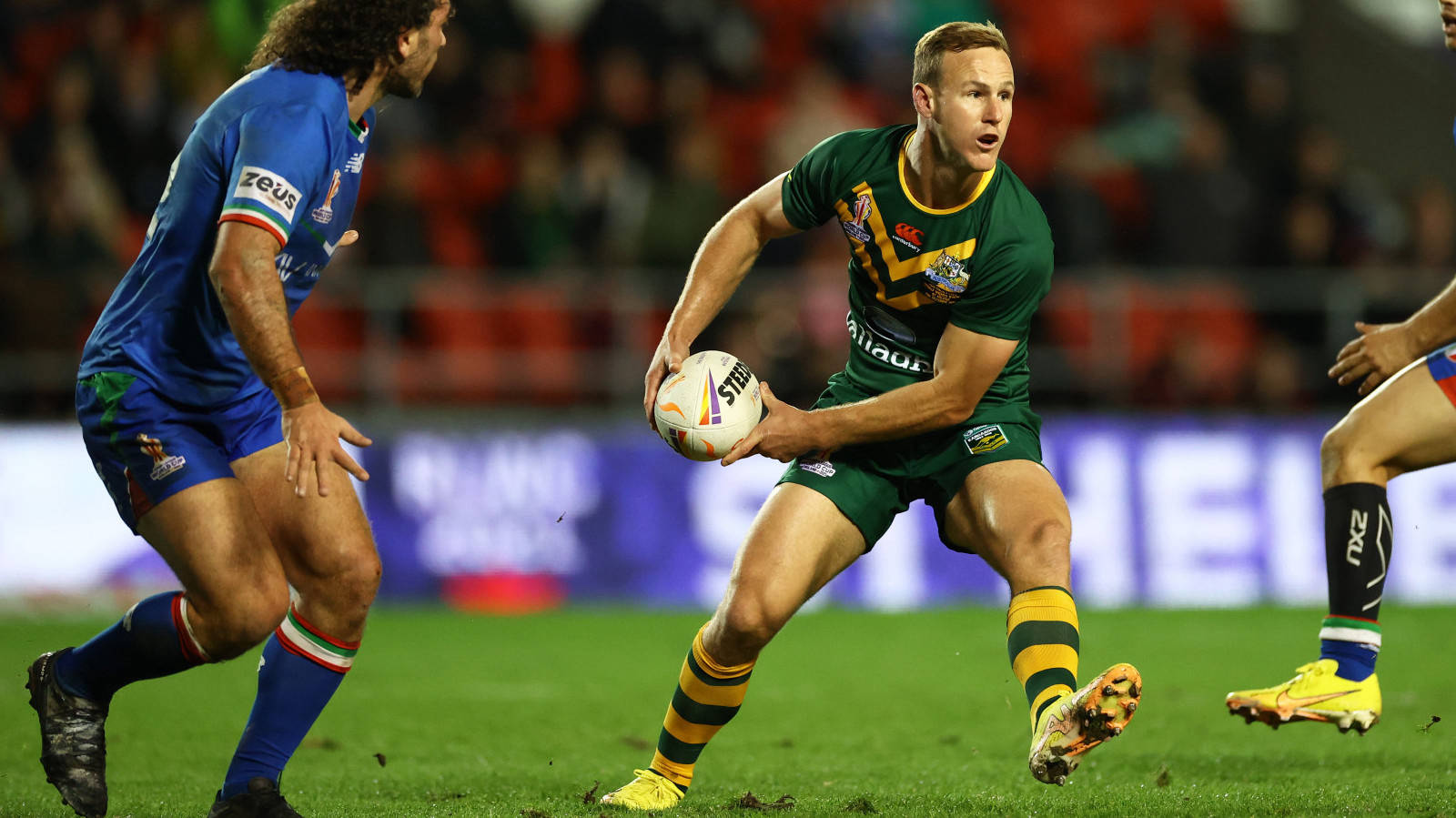 Daly Cherry-Evans and Nathan Cleary may be locked in rugby league's most talked about selection puzzle but they remain founder members of their own mutual appreciation society.

Australia coach Mal Meninga admits he's having dreams about who will take the number seven jersey when the Kangaroos line-up in the quarter finals, with Lebanon their likely rivals.

They played together in the 66-6 win over Italy which concluded the defending champions’ steamrollering group stages campaign, with 186 points scored and just 14 conceded.

But Meninga knows the time is coming to make what he's labelled his toughest selection battle, some statement considering the form of his team and the fact only captain James Tedesco is assured a starting role.

Cherry-Evans, the most experienced player in Meninga's squad, makes no secret he wants to be involved at the business end of the tournament, with Australia's win over the Azzurri a record 15th consecutive Rugby League World Cup victory.

He was bossing the halfback position until the pandemic put the international game on the bench and has the experience of pressure games, leading Queensland to State of Origin glory alongside Cameron Munster.

“I’m definitely ambitious for more but I just don’t know what is going to happen so I have just got to keep enjoying it," he said.

"Nathan is a great player. He played really well again and you can see why Penrith have been so strong and will be for a long time.

"It’s been a great tour so far and we are having a lot of fun.

“I am pretty relaxed with that sort of stuff. Don’t get me wrong I wanted to be named for next week and moving forward but whatever happens it is out of my hands now. If I get another opportunity, I will take it with both hands.

“It is always a special moment to play for Australia so to get a couple more games on this tour has been really special and something I will always cherish."

However, Cleary is, in the view of many, the best player in the game, even if he was uncharacteristically clunky with his early kicks for goal against Italy before rediscovering his rhythm.

After years of being spoilt by the likes of Andrew Johns, Johnathan Thurston and Cooper Cronk being first names on the Kangaroos team-sheet, having this tussle for halfback harks back to the selection battles between Peter Sterling and Steve Mortimer in the 1980s and Ricky Stuart and Allan Langer a decade later.

Cleary and Cherry-Evans played well together against a team ranked 17th in the world but it's clear it's not in Meninga's thinking for the knockout stages.

"It was actually really cool. We kind of swapped roles after half-time," said Cleary.

"It's up to Mal and I think either way he goes will be a great option. I really rate Daly, he's a great player.

“I will be supporting Mal’s decision no matter what and what’s great about this team is that there’s not much ego. Everyone is just grateful to pull on a Kangaroos jersey.”