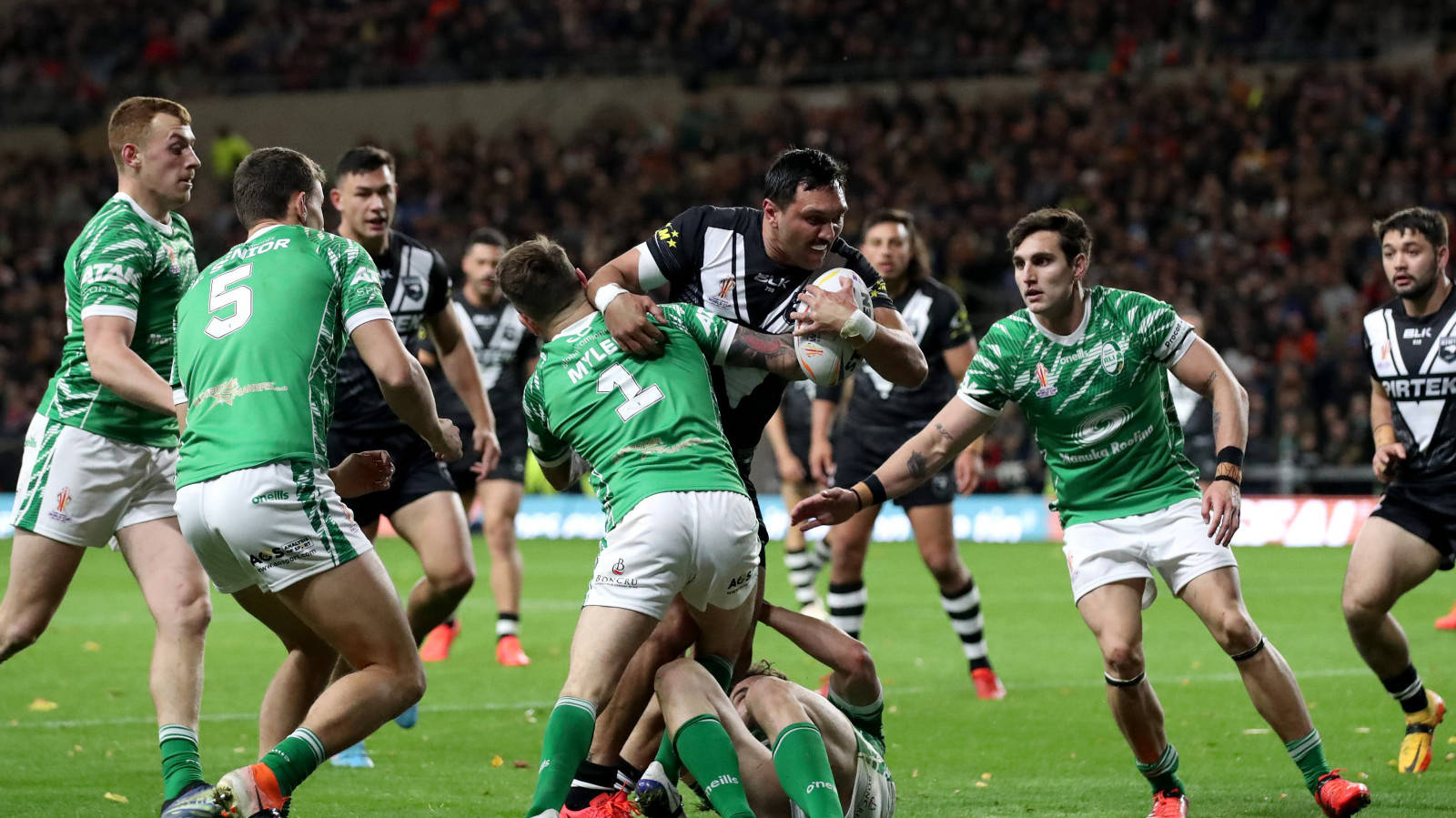 By Josh Graham at Headingley Stadium

The returning half-back, who missed the first two World Cup matches through injury, crossed twice in the match and was particularly influential early on, having a hand in all five of the Kiwis’ first-half scores.

Jordan Rapana and Ronaldo Mulitalo announced their return to the side after being rested against Jamaica with try doubles while centre Peta Hiku also bagged a first-half brace with Michael Maguire’s side now likely to face Fiji in the last eight before a potential semi-final showdown with the Kangaroos.

Ireland must pray for a miracle from the Reggae Warriors against Lebanon on Sunday but are likely to be heading out at the group stage.

Here are five things we learned from the opening game of Round 3.

Hughes back in the nick of time

New Zealand fans may have had to wait a full two games to witness Jahrome Hughes’ World Cup debut, but boy was it worth it.

The Melbourne Storm half-back took no time to warm up in this tournament, putting on one of the individual displays of the group stage in Leeds.

Hughes was at the heart of every single one of the Kiwis’ five first-half scores, getting Michael Maguire’s side going with some ankle-breaking sidesteps to dive over before a show-and-go after the break allowed him to cross for a second.

In tandem with Dylan Brown, making his own impressive return after a bout of sickness, the world’s No.1 side have a halves pairing to be feared.

Defending champions Australia are understandably favourites to lift the trophy on November 19, but New Zealand will have plenty to say about that.

The Kiwis have been on an upward trajectory ever since Joey Manu’s masterclass against Lebanon in Round 1.

Such is their strength in depth that Dallin Watene-Zelezniak, the four-try hero against Jamaica, could not even make the 19-man squad for the Ireland clash.

All things point to a New Zealand v Australia semi-final but first it’s likely to be three-time semi-finalists Fiji that stand in the way and having lost to the Bati in the quarters five years ago, you can bet the Kiwis will have a point to prove.

Jared Waerea-Hargreaves returned from suspension for this game but could soon have another spell on the sidelines.

The Sydney Roosters prop won his 33rd international cap for the Kiwis but spent ten minutes in the bin either side of half-time for a dangerous high shot on Dan Norman, who did not return after going off for treatment.

Waerea-Hargreaves’ tackle sparked a mini melee among the players and many will deem he was lucky not to have been sent off for making contact with the head.

The experienced middle’s added grunt was a welcome addition for Maguire’s side but whether we see him in the last eight could well be down to his own indiscretion.

Ireland their own worst enemy

Ged Corcoran will have been fuming at the repeated errors made by his Wolfhounds side as far too often they gift-wrapped opportunities for their classy opponents.

Ireland had hit double figures for errors before the 65th minute at Headingley and were regularly guilty of failing to complete their own sets.

You simply cannot get away with executing so poorly against the world’s highest ranked side and expect not to be punished on the scoreboard.

So much was made of the likes of Luke Keary’s decision to represent his heritage and pull on the green shirt at this World Cup.

The Sydney Rooster was joined in Corcoran’s squad by a host of Super League stars with the Senior twins, King brothers and Leeds Rhinos duo James Bentley and Richie Myler all established high-quality players.

However, for whatever reason, things didn’t quite click for the Wolfhounds, who are likely to be left rueing what could have been against Lebanon last time out.

Michael Cheika appeared to have worked them out as his side continually stripped the ball in a feisty fixture while an increasingly frustrated Irish contingent got sucked into scraps and lost their composure when the quarter-finals were still well within their grasp.