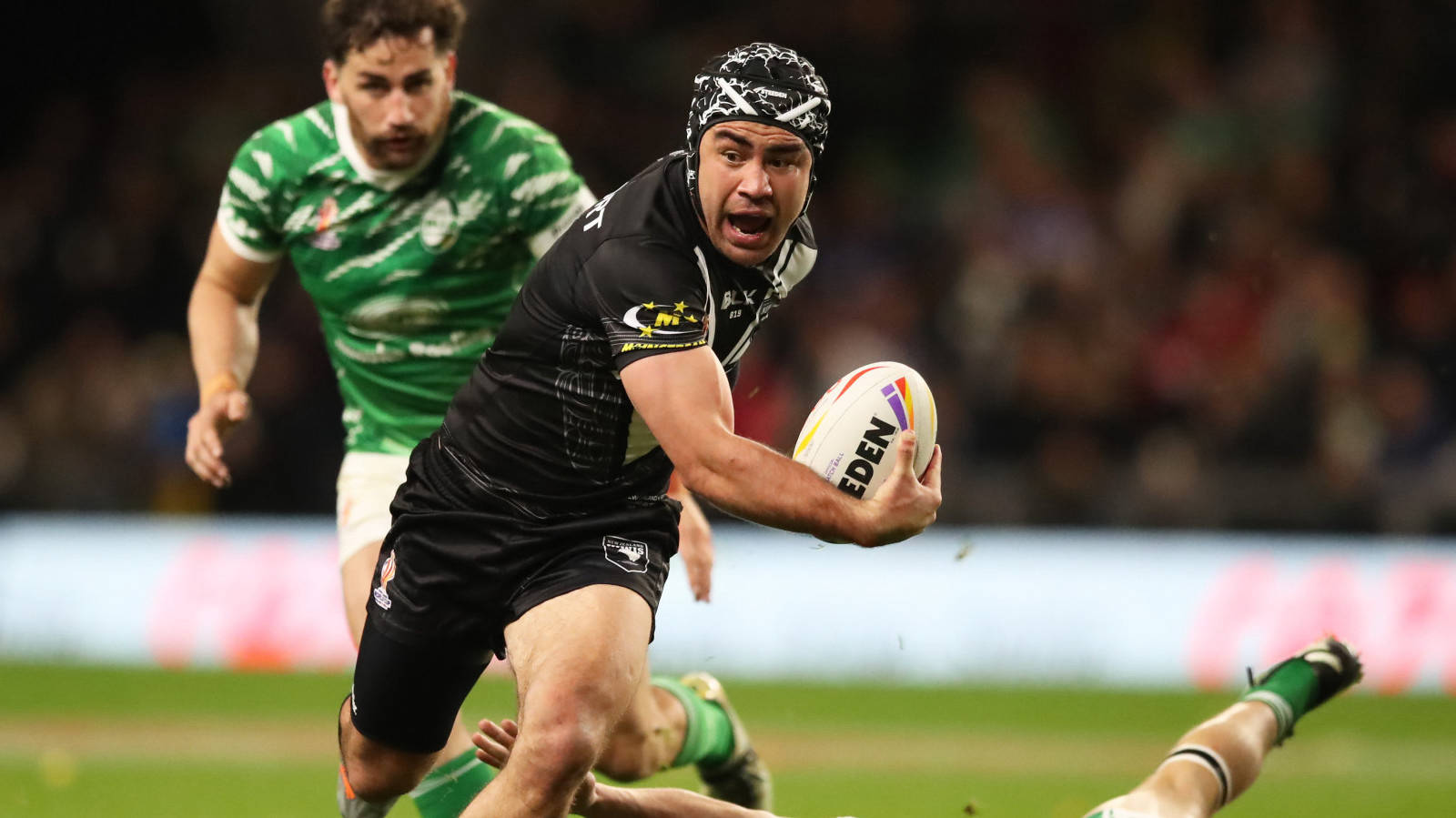 Jahrome Hughes admitted his ‘itchy feet’ helped him orchestrate New Zealand’s 48-10 win over Ireland to ensure their passage to the quarter-finals as Group C winners.

Hughes missed the Kiwis’ opening two World Cup games with a thigh strain, but made up for lost time by scoring twice and assisting three of New Zealand’s ten tries in a terrific individual display.

The scrum-half has been chomping at the bit on the sidelines and finally had the chance to show off his dancing shoes under the Friday night lights at Headingley, making the Wolfhounds pay for some sloppy errors.

“I had itchy feet for the last couple of weeks, so it was good to be back out there,” the 28-year-old said.

“We have little things we can work on as a spine but as a whole team we are moving in the right direction.

“We had a big week of training next week to get our combos right and we look forward to the challenge of finals.”

With Hughes back on the pitch he was able to rekindle his partnership with Melbourne Storm teammate Nelson Asofa-Solomona.

The World Cup debutant admitted the towering prop gave him comfort in the face of a keen Wolfhounds pack and partisan crowd.

He added: “I feel safe, I will tell you that much, he is my bodyguard out there. We would like to use him a bit more but I think [Luke] Keary did a good job getting up in his face.

“We didn’t get him the ball enough and he was a little bit frustrated out there, but you see what damage he can do when gets the ball and when he got back in the mood, he was scattering people for us.

“We just need to find the right fit for him and get the right balance of how we can get him the ball.”

Although Ireland need Jamaica to upset Lebanon to stand any chance of qualifying for the quarter-finals, their defeat to New Zealand still marked a special occasion for debutant Ronan Michael, the only Irish-born member of the Wolfhounds squad.

He said: “It has been probably the best three or four weeks of my life. I have been dying for it, I was dying for it last year and it got postponed and this year was savage.

“We had a great group and to finally get to go out there and make my World Cup debut and put on that green jersey, I have non-stop thought about it since we qualified.

“Tonight was about a never say die attitude. As a group we had a really tight core, we wanted to come out swinging and put it on arguably one of the best teams in the world.

“That’s what it is all about, we are the fighting Irish and we want to show the world that, listen, we’re small but there is a lot of talent where we are from and we have a lot of passion for what we do.”