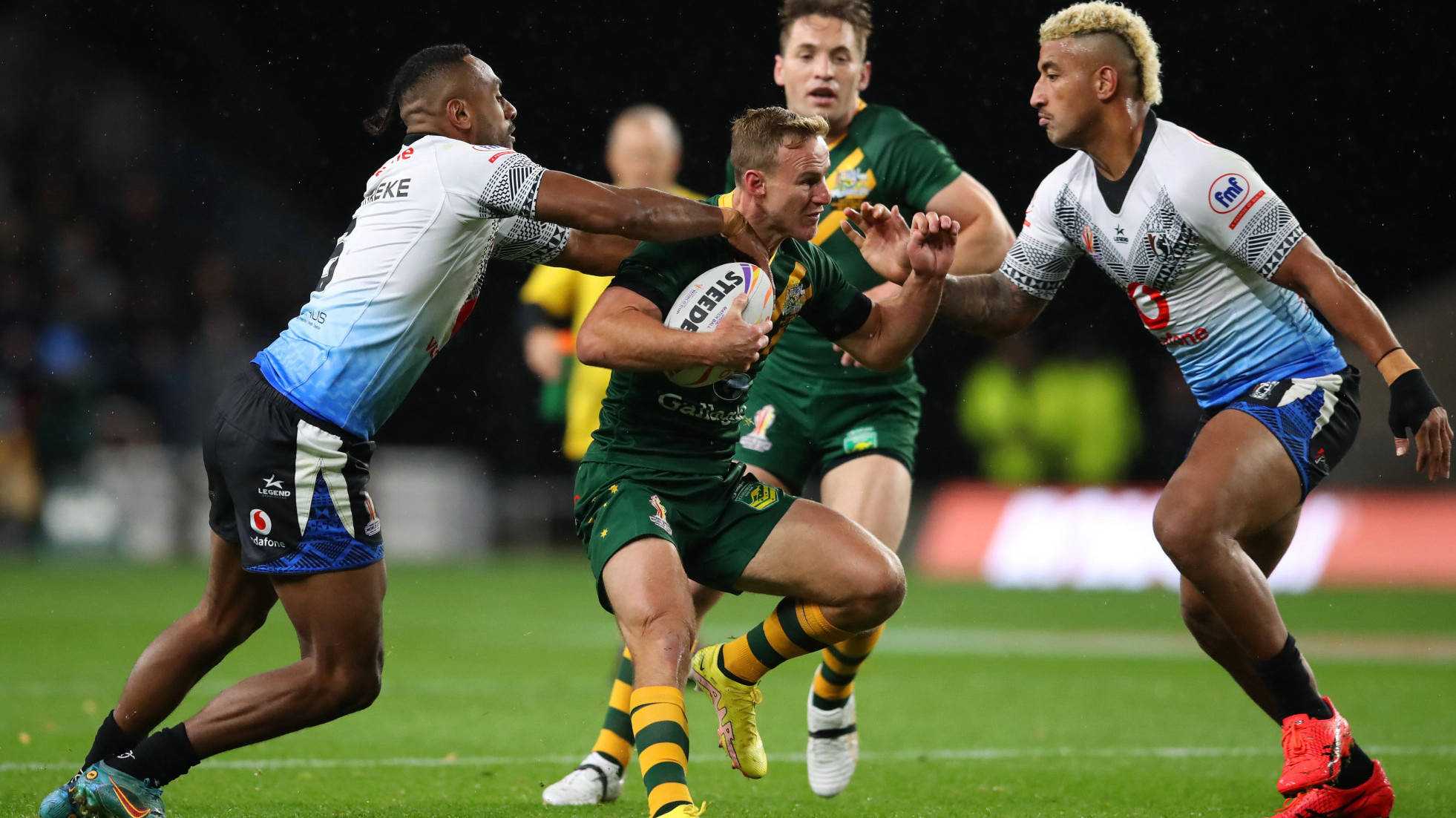 When Mal Meninga tells you to leave your egos at the door then it's wise to listen.

The Kangaroos coach is blessed with an embarrassment of riches at the Rugby League World Cup, admitting the selection dilemmas that loom are never far from his thoughts.

He confirmed rugby league's worst kept secret with all-star playmakers Nathan Cleary and Daly Cherry-Evans set to combine in the halves for the first-time in Saturday's final group clash with Italy.

Cherry-Evans started the game against Fiji while Cleary made an attention-grabbing Kangaroos debut in the steamrollering of Scotland in Coventry.

Meninga is still keeping coy on his first-choice halfback so has decided to name them both, also resting Cameron Munster for Saturday's showdown with the Azzurri.

"Mal has made it very clear that some big decisions will be need to be made and some people will miss out as a result," said Cherry-Evans.

"We know this is not because we are playing bad, it's because we've just got so many good players.

"Our strength is we will pick the 17 best players and you might not get to play where you do for your club.

"I pride myself on being able to play different positions and a different style. I always thought I'd end up playing with Nathan at some point and there's no ego there. We just want to play a role for this team."

READ MORE: What are the teams for Australia v Italy men at the Rugby League World Cup?

Cleary, Cherry-Evans and captain James Tedesco have been working hard in training to forge a relationship, putting in the hours that underlines just why Australia will be so hard to beat in the defence of their title.

They were ruthless against Scotland, putting down the throttle when victory was long assured, and Meninga has ordered more of the same - with no better preparation for the knockout stages than a second consecutive shut out.

And a win would make history too, a record 15th consecutive victory at the tournament, an unbeaten run that goes back over 5,000 days to the 2008 final.

"I'm just excited, I got to play alongside Cameron Munster last week and now I'm alongside Chez," said Cleary, whose debut featured three try assists and a try in just the first 30 minutes against the Scots.

"We'll mix it up a bit depending on who has the flow at the time, it's something we've been working on. We are playing alongside each other, so there's no way we will try and outdo each other.

Meninga has made no secret he wants to give all his 24-man squad two games before a likely last eight date with Lebanon, so Cowboys trio Reuben Cotter, Jeremiah Nanai and Murray Taulagi return, as does Latrell Mitchell.

"I was very pleased with the performance against Scotland last week,” said Meninga

“Defensively, we were outstanding, and I’m looking forward to seeing more cohesion with the ball.

“All players in the squad will have played at least two matches in the pool stages, which is extremely important ahead of the quarter-finals and hopefully beyond.”