The wing said he 'just had to do the easy bit' 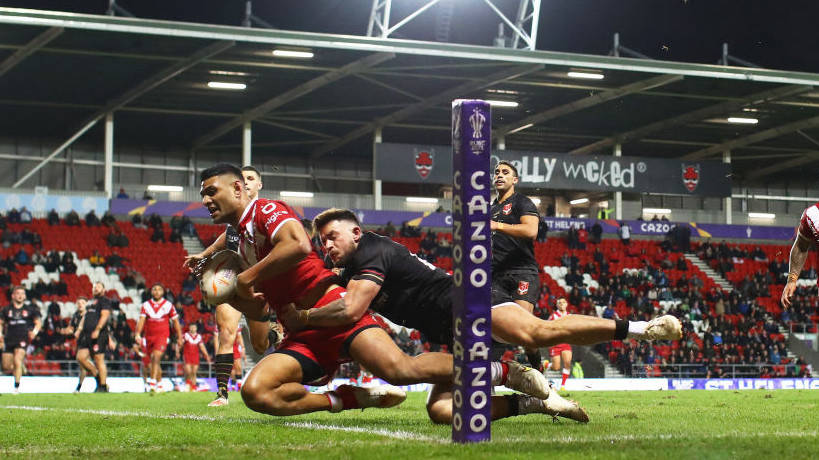 The wing said he 'just had to do the easy bit'

Modest Daniel Tupou was full of praise for his Tongan team-mates despite scoring three tries himself in his side’s 32-6 success over Wales in St Helens.

Tupou’s trio of scores took his international tally to nine while Tesi Niu, Keaon Koloamatangi and David Fifita also crossed for Tonga, who have won both their Group D fixtures.

It means Kristian Woolf’s side are in pole position to qualify for the quarter-finals, where they may meet Samoa, with their efforts giving Tupou three simple finishes on the right wing.

Tupou said: “I am extremely humbled, obviously the boys did all the hard work through the middle, and we just completed. I just had to do the easy part and get the ball down.

“It was a great effort from the lads that I could finish off.

“In the first half, we didn’t respect the ball enough and gave Wales opportunities. We needed to start well in the second half and we did, we completed well and got the result in the end.”

The Tongan fans were in full voice at the Totally Wicked Stadium and will have enjoyed seeing their side run in six tries with Tuimoala Lolohea adding three conversions and Siosifa Talakai one.

Tupou added: “We have really passionate fans I feel like we have the best fans in the world. They showed how passionate they were, holding up the bus even though we were a couple of minutes late.

“That’s the passion they bring and that’s normal back in Tonga - we love it. We’ve got a massive fan base here and they definitely got us across the line tonight."

Tonga head coach Woolf, meanwhile, knows his side will need to improve if they are to replicate their run to the semi-finals in 2017 but believes they are capable of stepping up as the tournament goes on.

"We made things a bit hard for ourselves out there," he said.

"Our ball control and discipline wasn't quite good enough. We left a large amount of points out there and there is plenty of improvement for us to make.

"Our defence was good, we didn't look threatened too many times, and you don't want to be playing your best in your second game of the tournament.

"You want to be playing your best in your fourth or fifth game, towards the big games. We've earned that opportunity and we'll be better next week."