Ipape determined to ensure Kumuls stay on the rise 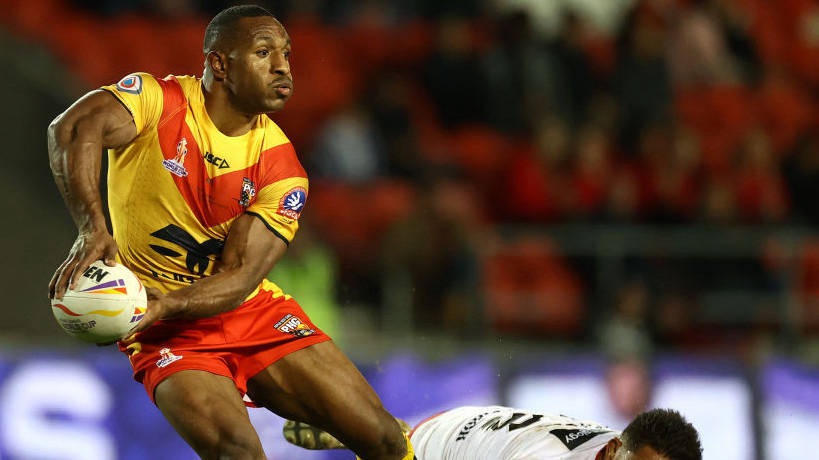 Ipape determined to ensure Kumuls stay on the rise

Edwin Ipape has made a significant impact on English soil since arriving in Leigh and wants that to continue as he targets the Rugby League World Cup knockout stages with Papua New Guinea.

The Kumuls face Cook Islands in Warrington on Tuesday night in a match they need to win to keep their quarter-final hopes alive following last week’s narrow defeat against Tonga.

Ipape picked up the Cazoo Player of the Match award for his performance, continuing his fine form after being named the Championship Player of the Year for his efforts in a Leigh shirt in 2022, and credited his club with providing him a platform to shine.

“They have given me the opportunity to come out here and expose my talent and it’s been a blessing, to be honest,” he said.

“Without the club and without the people, coach Adrian (Lam), Chris Chester and Derek Beaumont, they’ve done a tremendous job to bring me over here.

“There’s been a lot of people who have put in the work to get me over here, I’ve kept my head down, worked hard for it and I guess things are going well for me this year.

“When you are playing in week in week out, that’s when your confidence goes up and you just want to keep on that and work on what’s working.”

And he wants to see more PNG stars given such opportunities as the footy-mad nation look to replicate the exploits of their fellow Pacific Islanders in making their mark on the global stage.

“I would love to see one of my countrymen playing in the Super League or NRL,” he said.

“I would love to play at the top level. Leigh have won the Championship and hopefully I’ll have the opportunity to play in the Super League next year.

“We want to show that we can compete at this level and that we’re good enough to be here and not just to make numbers but to hopefully get to some finals.”

PNG’s next challenges comes against a Cook Islands side who were the only team to overturn a half-time deficit in Round 1, coming from behind to defeat a spirited Wales 18-12.

The performance of Davvy Moale, whose try was key to the turnaround, was particularly noteworthy and Cook Islands coach Tony Iro is expecting the young gun to keep making a name for himself over the course of the competition.

“He’s a 19-year-old out of the [South Sydney] Rabbitohs and he’s played some first grade this year,” Iro said.

“They’ve really looked after him this year in terms of limiting his game time but he’s got real potential.

“He’s destructive, he’s a good kid, pretty humble and he’ll get better and better. We’d like not just him, but the whole group, to take a step forward against Papua New Guinea.”