What are the teams for Papua New Guinea v Cook Islands men in the Rugby League World Cup? 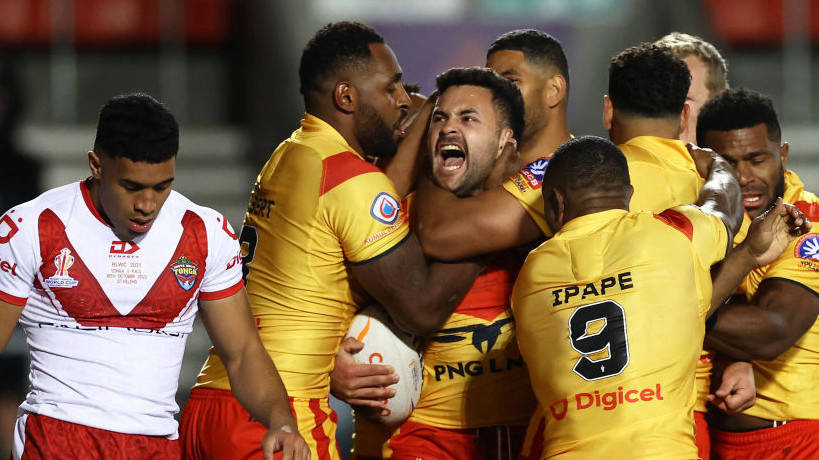 What are the teams for Papua New Guinea v Cook Islands men in the Rugby League World Cup?

Papua New Guinea are looking to bounce back while Cook Islands are gunning for two wins from two in an intriguing Group D clash at the Halliwell Jones Stadium on Tuesday.

The contest brings the second round of group games to a close and will be pivotal to both sides’ quarter-final ambitions, with Papua New Guinea knowing defeat will likely see them face an early trip home.

Papua New Guinea make two changes to the squad that lost 24-18 to Samoa, with Jimmy Ngutlik and Jeremiah Simbiken coming in for Sherwin Tanabi and Xavier Coates.

There are three alterations to the Cook Islands squad, Tinirau Arona, Moses Noovao-McGreal and Vincent Rennie coming in to a squad captained by Brad Takairangi.

Papua New Guinea have the historical edge, having won all five of their previous matches against the Cook Islands.

They have scoring at least 32 points in each game during that period but the 32-22 win over the Kukis in their last meeting was the closest margin in the history of this fixture.

The Cook Islands were the only team to overcome a half-time deficit to win in Round 1, becoming just the third team to win after trailing at the break since the start of the 2013 tournament.

Papua New Guinea have won three of their last four group stage games at the men’s Rugby League World Cup, scoring 50+ points in a game twice in that span.

Before that, they had won only three of their 25 group stage games at the tournament.

The Cook Islands have won three of their last four men’s internationals including an 18-12 win over Wales in Round 1 fixture, as many as they had won in their eight games prior.

The Kukis have now won their last two games at the men’s Rugby League World Cup after not winning any of their five previous games at the tournament, with both wins coming against Wales.

The Rugby League World Cup promises to be the biggest, best and most inclusive event in the sport’s 127-year history with men’s, women’s and wheelchair teams competing in 61 games across 21 venues throughout England. Tickets are available via rlwc2021.com/tickets, via the stadium ticket office (from 16:30) or from the South & West Stand cash turnstiles.