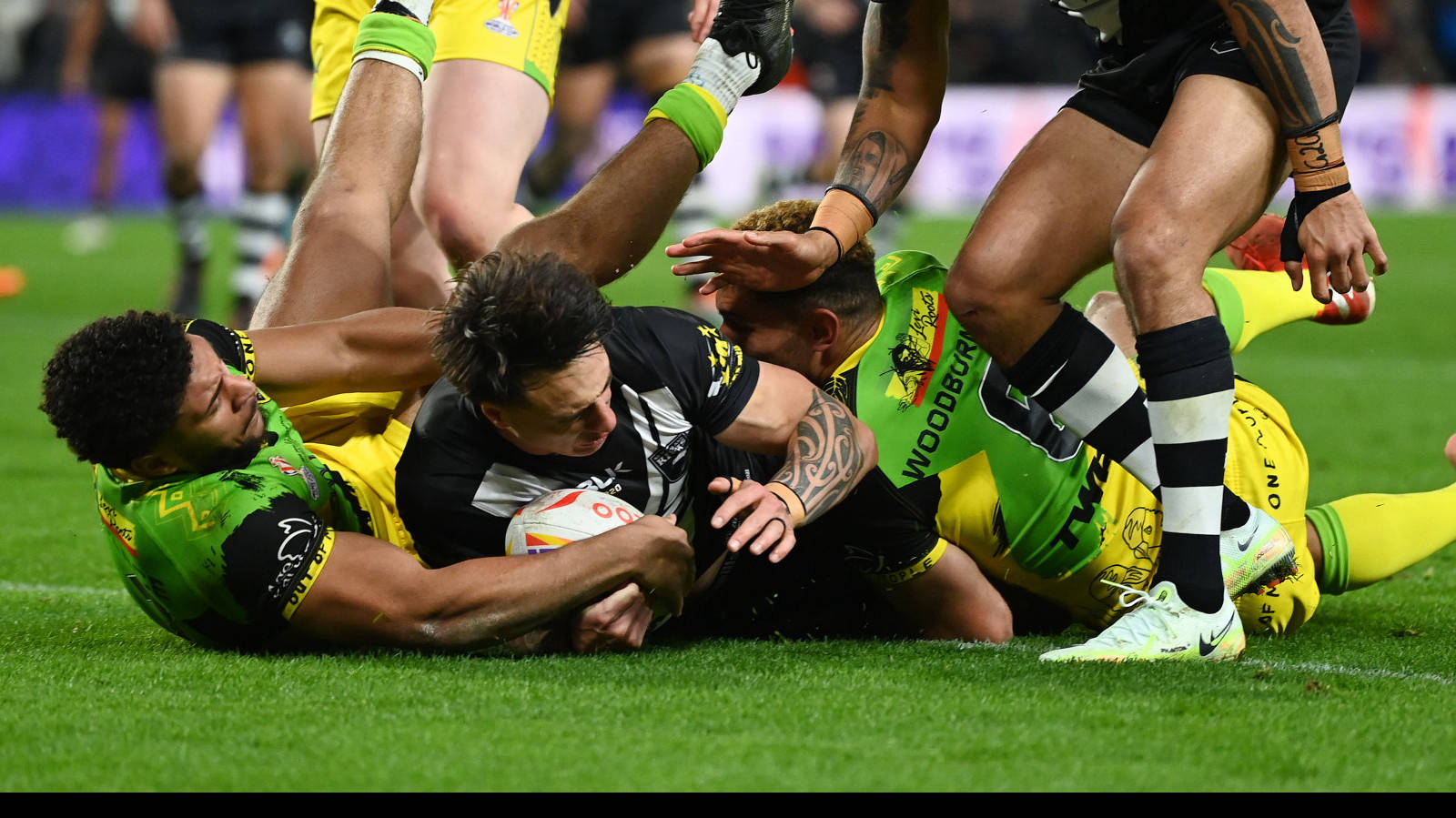 Dallin Watene-Zelezniak’s dazzling four tries helped New Zealand book their spot in the quarter-finals with a 68-6 triumph over Jamaica at MKM Stadium.

Michael Maguire’s men ran in 13 tries against a spirited opponent but it was the Reggae Warriors who had the last say thanks to Ben Jones-Bishop’s historic late score, their first at a World Cup.

Picking up the brilliance baton from full-back Joey Manu, wing Watene-Zelezniak snatched a hat-trick in just 19 minutes before finishing with four tries overall.

He added two conversions to take his points haul up to 20 after temporarily taking over kicking duties from misfiring veteran Kieran Foran before struggling with cramp himself.

It’s fair to say it was not a bad impact to make on his first international appearance since 2019 and underlines the scary amount of firepower Michael Maguire is able to call upon.

Injuries will play part as tournament goes on

Despite the scoreline, everything was not all rosy for Maguire come the end of the 80 minutes in Hull.

New Zealand suffered the late pre-game withdrawal of half-back Dylan Brown with Maguire saying on TV before kick-off that his playmaker was “violently ill”.

That news was compounded by the fact that try-scorer Marata Niukore and Moses Leota did not return for the second half with chest and leg injuries respectively.

With the quarter-finals fast approaching, Maguire will be desperate to welcome Jahrome Hughes back into the fold against Ireland having missed the first two games with a thigh strain.

And you can bet he will want to wrap his other stars in cotton wool ahead of what looks set to be a quarter-final match-up with Fiji.

Nothing wrong with a bit of invention

Jamaica may have had no match for New Zealand’s considerable firepower with the stakes heavily weighted towards the world’s highest ranked side.

However, the Reggae Warriors did come out on top in one facet of the game, catching the Kiwis cold several times with Kieran Rush’s expertly taken short kick-offs.

Convention usually dictates that sides boot the ball deep into opposition territory to pin them in their own half but with nothing to lose, Jamaica thought outside of the box and reaped the rewards several times. Commendable ingenuity from the tournament debutants.

More to rugby league than the result

Ben Jones-Bishop’s 75th-minute try for Jamaica was arguably the most spine-tingling moment of this World Cup.

The two-time Super League champion from his Leeds Rhinos days was the beneficiary of Brandon Smith’s failure to cleanly collect a Rush kick.

Jones-Bishop pounced, toe-poked the ball over the line and collapsed on top of it to spark pandemonium among his teammates, who could not have been less bothered that they trailed 68-0 at that point

With one foul swoop, the 34-year-old has written his name into Reggae Warriors folklore forever and to do so on his 300th career appearance was most fitting.

The respect between the two sides was palpable and to see both teams give the Jamaica full-back a guard of honour off the field to celebrate his milestones would have touched many onlookers, Maguire included.

Race for trophy hotting up

New Zealand delivered plenty in attack here to suggest they are more than capable of wrestling the World Cup away from defending champions Australia’s grip.

The two neighbouring countries are on a collision course for the semi-finals if they win through their groups and quarters.

READ MORE: Maguire wants his side to keep pushing after Jamaica triumph

The Kangaroos were incredibly impressive when dispatching Scotland 84-0 on Friday night with England showing their intent on Saturday, beating a good France side comfortably by 42-18.

Add into the mix a wounded Samoa and Tonga team that came so close to the final in 2017, and we arguably have the most exciting conclusion ever to a World Cup in store.