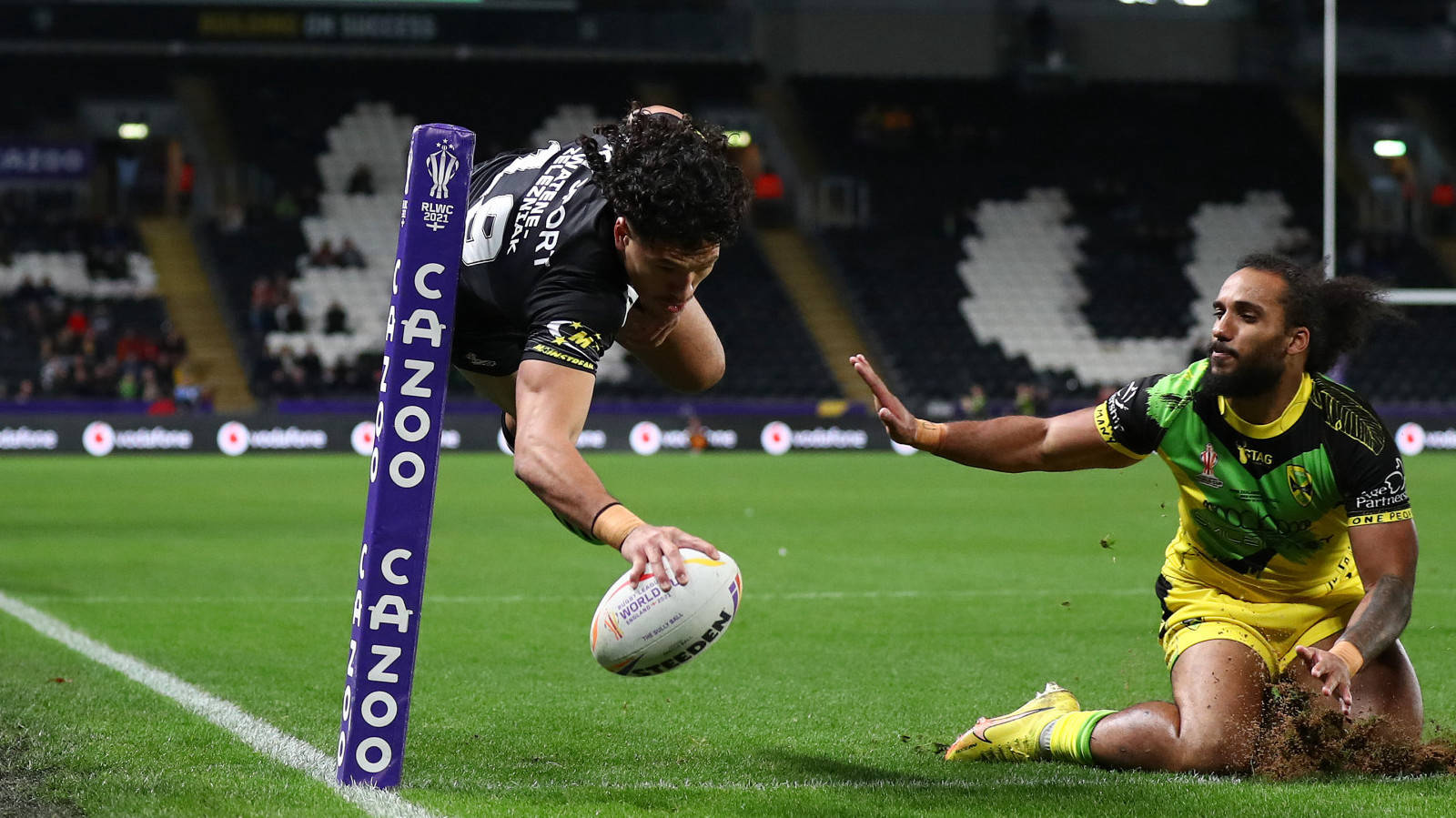 By Megan Armitage at MKM Stadium

Dazzling Dallin Watene-Zelezniak lit up the night skies of Hull with four tries as New Zealand's emphatic 68-6 victory over Jamaica booked their spot in the quarter-finals.

The winger also notched two conversions to rack up an incredible 20 points at the MKM Stadium, collecting a hat-trick in the first 19 minutes either side of Peta Hiku's early score.

Marata Niukore and debutant Sebastian Kris also touched down with Jeremy Marshall-King crossing with the last play of the half before adding his second after the break.

Charnze Nicoll-Klokstad, Briton Nikora and a Brandon Smith double added further points for the Kiwis but Jamaica made history in the 76th minute as Ben Jones-Bishop claimed their first ever World Cup try on the occasion of his 300th career game.

Watene-Zelezniak crossed with ease in the fourth minute before Hiku joined him on the scoresheet five minutes later, dotting down on the right.

Coming into the game as the lowest ranked team, Jamaica impressed with some creativity early on as Joel Farrell offloaded to James Woodburn-Hall who went on a great run into the midfield.

But Maguire's side took advantage of a slow Jamaica defence twice more in the opening 20 minutes as Watene-Zelezniak grabbed his hat-trick on the right wing, breaching the defence and racing to the line from his own 40 to make it 18-0.

A late tackle by James Fisher-Harris on Kieran Rush brought a penalty for Jamaica but they couldn't make it pay and the Kiwis regained possession.

New Zealand's lead could have been even more impressive if veteran half-back Kieran Foran had brought his kicking boots, he made just three out of his seven conversion attempts in the first half.

With Jamaica putting everything into their despairing defence, New Zealand capitalised on their opponents' fatigue as Niukore slipped through the defence on the left to add a fifth.

Joey Manu's lovely pass into space allowed Kris to claim his debut try shortly before Marshall-King juggled a Watene-Zelezniak kick before dotting down just before the dead-ball line to make it 34-0 at the break.

Watene-Zelezniak decided to add even more points to his tally by taking over kicking duties from Foran in the second half, converting two from two and shining with assists.

It was one-way traffic from the start once more as Nicoll-Klokstad dotted down with the Reggae Warriors forced to wait for their opponents to make mistakes in order to gain any territory.

New Zealand continued to showcase their unstoppable strength as Nikora and Marshall-King crossed to bring up their half-century.

Watene-Zelezniak capped his night by seizing a fourth try in the 59th minute, despite Hiku almost botching the pass out to the right.

But Jamaica’s efforts were finally rewarded right at the end of the game as a kick from Rush on the final tackle escaped Smith's grasp before Jones-Bishop poked through and dived on the ball to write his name into the record books.