Five things we learned from England's convincing win over France

Victor Radley, Jack Welsby and Ryan Hall were among those to shine in Bolton 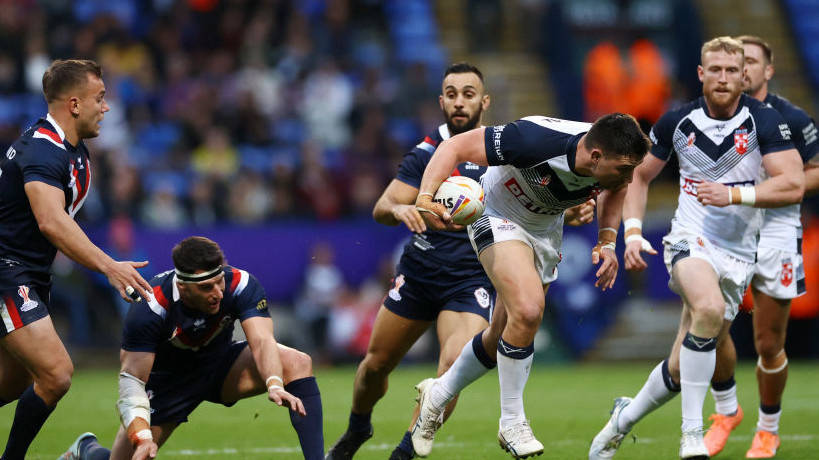 Five things we learned from England's convincing win over France

Victor Radley, Jack Welsby and Ryan Hall were among those to shine in Bolton

Shaun Wane’s England came through a stern test against France in Bolton to maintain their 100 per cent start to the World Cup and put one foot in the quarter-finals.

The hosts raced into an 18-0 lead thanks to recalled Ryan Hall’s double and a try for Luke Thompson before Les Tricolores pegged them back as Arthur Mourgue reacted fastest to his own kick before Éloi Pélissier went over.

That made it 18-12 at the break but England, so impressive in the 60-6 win over Samoa last week, came out of the blocks firing with tries for Elliott Whitehead, Victor Radley and a double for Dom Young, although France had the last say in a 42-18 defeat with Arthur Romano’s try.

What was said in the England changing room?

After a nervy end to the first half, the hosts came out firing in the second.

Here are the five things we learned from the contest at the University of Bolton Stadium.

Young may be the new kid on the block but Hall began scoring tries for England when his teammate was still in primary school.

Both wingers bagged doubles here against but it was Hall who got Wane’s men off to a flyer with two in the first 11 minutes.

Many had written off the hosts’ record try-scorer – it is now 37 tries in 39 appearances for England – given Young’s dynamic display at St James’ Park last week and the Newcastle Knights man again impressed, showing his athleticism with a length-of-the-field interception in the second half.

However, Hall’s riposte puts him back in the frame and maybe even has Tommy Makinson sweating on his place, although the St Helens man has another string to his bow with his prolific goal-kicking.

Young is taking the World Cup by storm but he knows he is not the finished product just yet, as an ill-judged offload that eventually led to Romano’s late try highlighted.

In short, competition for places is still fierce out on the edge and Wane would not want it any other way.

Shaun Wane is a notoriously hard man to please.

His insatiable appetite to see his side continually improve is what makes him so good and perhaps could be the key if England are to go all the way in this tournament.

Fans of the hosts could have been forgiven for thinking they were in for another procession after a blistering start but England switched off at the end of both halves, despite still ending as comfortable winners.

Player of the match George Williams admitted Wane had some choice words at the break and with the result secure they again took their foot off the pedal in the second period.

Romano’s late try would have been followed by another for Samisoni Langi if he hadn’t lost the ball in the act of scoring.

Australia underlined their status as favourites in a 15-try demolition of Scotland on Friday night and if England are to meet them or the likes of New Zealand in the latter stages, they can ill afford to switch off.

Tournament footy is all about squad depth and versatility and Jack Welsby is arguably the most adaptable player in the world game right now.

Starting on the interchange bench here with Marc Sneyd given a chance to shine in the halves, Welsby came on at full-back for Sam Tomkins before shifting to centre after Kallum Watkins’ head injury.

Watkins’ blow could force Welsby out of the starting stand-off role, where he excelled against Samoa, but his ability to fill five positions at a world class level is invaluable for Shaun Wane with injuries inevitable.

READ MORE: Frayssinous backs England to go all the way

The Sydney Roosters loose forward again combined ferocious defence with deft handling and remained a constant threat when he took the ball to the line.

Radley’s jinking run and pass inside to Thompson helped England capitalise on Hall’s double to go 18-0 up.

And the Australian-born ace, who is representing his father from Sheffield here, got one of his own after collecting Andy Ackers’ smart kick through.

Frayssinous said: “I am a big fan of Victor Radley, he can create space on his own, he can play into space, he knows what to do and when to do stuff. Victor Radley has been impressive.”

Radley’s importance will only grow along with England’s hopes of claiming the trophy as he comes up against his NRL mates in the knockout stage.

The scoreline does not accurately reflect the fact that France were well in this match for large portions of the contest.

After England’s ruthless display against Samoa at St James’ Park, Les Chanticleers will face a straight shoot-out against the Pacific Islanders for a place in the quarter-finals.

And Frayssinous’ men showed enough to suggest they will be more than in with a shout of getting the job done against a side packed with NRL talent.

Mourgue continues to shine as a playmaker and with the head coach revealing that his skipper Benjamin Garcia has been battling illness, there is more to come from his side.