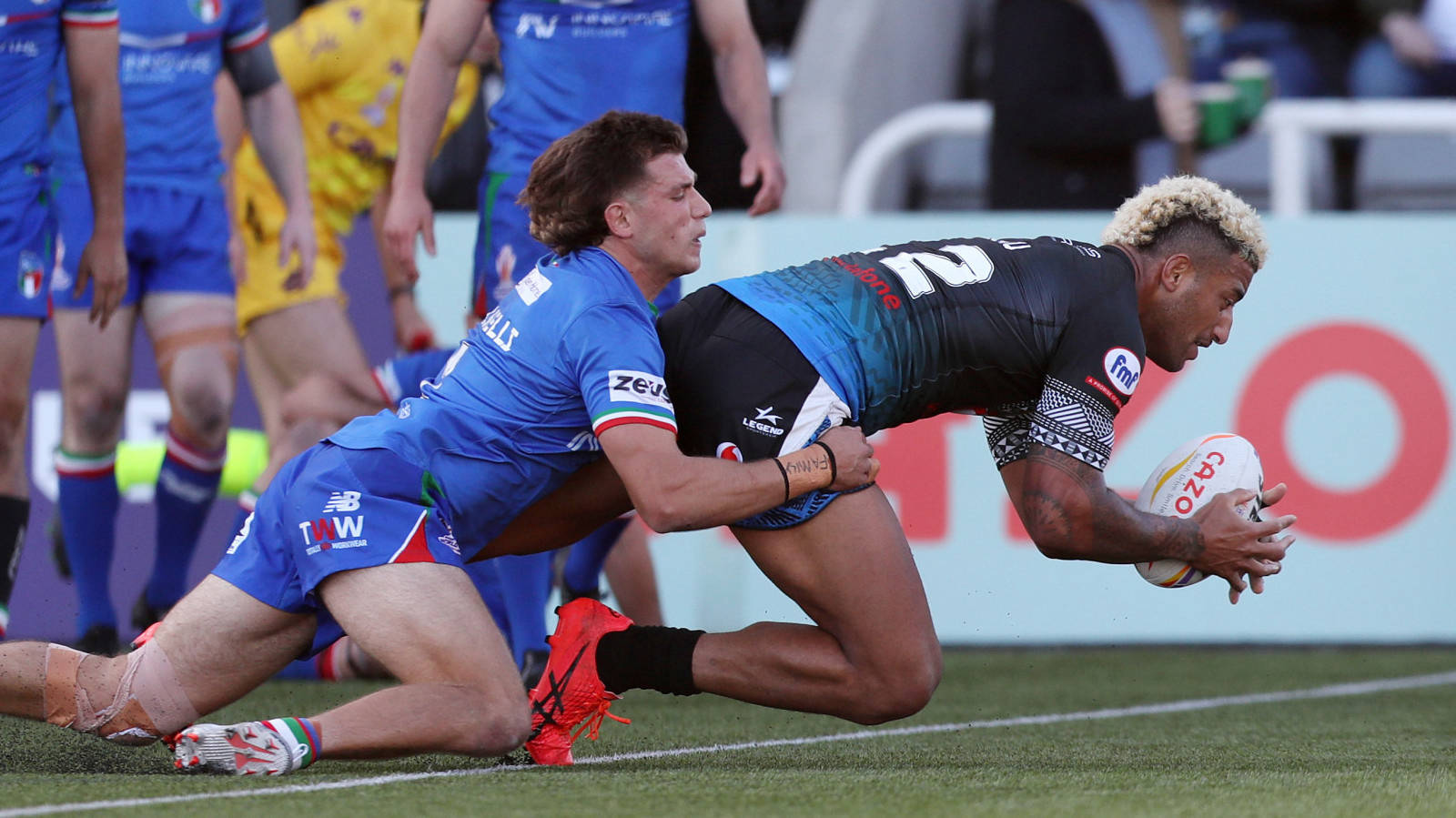 A virtuoso display from Viliame Kikau helped a fluent Fiji boost their quarter-final hopes as they eased past Italy 60-4 at Kingston Park.

Kikau set the tone for a one-sided encounter with an early try and was joined by Penioni Tagituimua and Maika Sivo in crossing twice on a productive afternoon for Wise Kativerata’s side in Newcastle.

Kevin Naiqama, Apisai Koroisau, Ben Nakubuwai and Taniela Sadrugu also scored as the Bati bounced back from their opening round defeat against Australia in style, with Brandon Wakeham enjoying a flawless afternoon off the tee.

Jake Maizen’s try gave the Azzurri faithful something to cheer in the second half but Italy now face a daunting clash with the Kangaroos knowing they are likely to need a win if they are to make the knockout stages for the first time.

What a start from Fiji!

Fiji were on the front foot on the outset and Korbin Sims almost made an instant impact having come out of retirement to join up with the Batis this week.

The lock was held up over the line but Fiji were not to be denied for long as an Italian error was punished in ruthless fashion.

Backtracking full-back Luke Polselli spilled Wakeham’s swirling kick and when the ball was reset, there was no stopping Kikau from close range as he dotted down with an outstretched arm to open the scoring.

The Azzurri were architects of their own downfall again just three minutes later as Dean Parata’s loose pass was pounced upon by skipper Naiqama, who sprinted in unopposed from halfway.

Tagituimua jinked over from dummy half for Fiji’s third try inside the opening quarter of an hour before Kikau brushed off an attempted tackle to cross for his second.

Italy threatened for the first time on the half-hour mark but were unable to make a fresh set count deep inside Fiji territory after Nathan Brown had been hit late by Sadrugu.

Fiji have taken the first half by storm.

Having withstood the pressure, the Bati again displayed their cutting edge in attack as Koroisau stepped past two tacklers to waltz over.

It could have been more with the clock in the red as a free-flowing move was only halted by Sadrugu’s slip, a sizable overlap to his left remaining unused as Italy escaped further punishment.

There was no let-up in the second half, which was just six minutes old when Vuate Karawalevu claimed a high ball inside his own 10-metre line and left a string of Italian defenders trailing in his wake. His progress was stopped just inside the Italy half but Fiji kept the pressure on and Tagituimua soon darted over for his second and the Bati’s sixth.

Wakeham’s boot played a key role in Fiji’s next two scores, Nakubuwai claiming a bouncing ball and powering over before the next aerial kick was expertly caught by Kikau and spun wide for Sivo to complete the job.

Italy’s response came from a familiar source, Maizen making the most of a rare bit of space to dot down in the corner for his fourth score of the tournament following last weekend’s hat-trick against Scotland.

The respite was brief, however, as Sivo latched on to Kikau’s offload to cross in the corner before Sadrugu added try number ten in the dying seconds following a fine break by Naiqama.