Five things we learned from Australia’s comprehensive win over Scotland 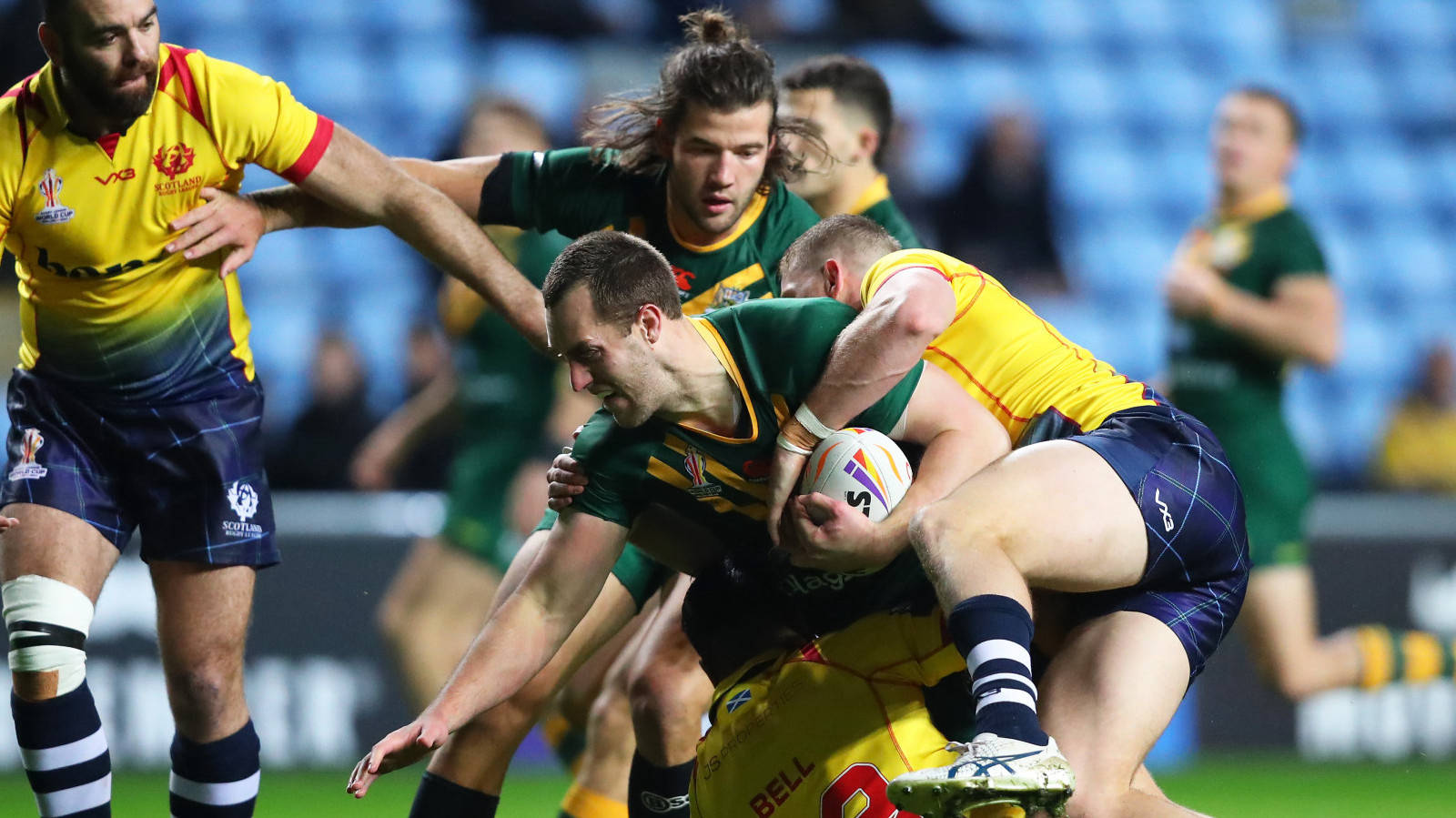 Five things we learned from Australia’s comprehensive win over Scotland

The defending champions were overwhelming favourites heading into this Group B clash and they justified that tag with an awesome display on a drizzly Friday night in the Midlands.

Here are five things we learned from tonight’s opening Round 2 encounter.

Defence as impressive as attack

You might think given the lopsided scoreline that it was Australia’s dazzling attack that dominated proceedings at the Coventry Building Society Arena.

However, it was the unrelenting defence that set the tone from the off, with Scotland drowning under Kangaroos pressure.

The Bravehearts struggled to get out of their own half with so little possession and only mustered their first play the ball in Australia’s 20 with 30 seconds to go.

No worries about Australia’s squad depth

There has been plenty of talk about international eligibility after waves of Pacific Islanders chose to represent their heritage nations over the likes of Australia and New Zealand.

But don’t go feeling sorry for the Kangaroos and their embarrassment of riches. The never-ending NRL talent factory does not look like drying up anytime soon.

You could have made a case for the majority of the Australian side receiving player of the match here, make no mistake they are still the ones to beat even if some of their State of Origin representatives are wearing different coloured shirts.

Two is better than one

Harry Grant’s searing display off the bench against Fiji had many suggesting he should take the starting role off Ben Hunt going forward.

Meninga had opted to replicate Queensland’s formula of Hunt to start and Grant to inject the pace from the interchanges first time around but swapped them for this clash.

Hunt showed exactly why he is so valuable with a sprightly display when he came on with Grant also displaying a neat touch with a deft kick for Campbell Graham’s hat-trick try.

When you’ve got two great players, why do you need to pick one? The combined threat of the two is a daunting prospect for all the other sides in this tournament, so don’t worry too much who you see running out from the start.

In fact, Hunt’s versatility as either a roaming forward or even taking a turn at full-back means you can double up and have both on the field at once as we saw tonight.

The stars aligned for Campbell Graham.

If the World Cup had gone ahead last year, the South Sydney Rabbitoh would have been representing the Bravehearts in this tournament.

But as it turned out, he scored a hat-trick on debut against the land of his Glaswegian father.

It was a bitter pill to swallow for namesake and Scotland coach Nathan Graham, who joked after: "It's a bit nasty of him to score a hat-trick against us on debut."

It was fitting too that Graham’s try-scoring feat should come in his mother’s hometown of Coventry, meaning all three elements of his background were well represented.

Addo-Carr in a league of his own

Already on six scores from the first two games, Josh Addo-Carr’s name may as well already be inscribed on the trophy for the tournament’s most prolific try-scorer.

He was already the favourite, but the Canterbury Bulldogs winger has exceeded expectations as a double against Fiji was followed up by this supreme display that yielded four more.

His lightning speed was on show once again but like any great entertainer, he saved his best for last.

Matt Burton’s outrageous flick through his legs kept the ball in play before Addo-Carr dropped it onto his boot and did his best Gareth Bale impression by diverting off the pitch to steam past the last line of Scottish defence and dot down.

It was a sensational finish to a one-sided match, but even Scotland fans must have thought it was worth the wait to see a try that will be doing the rounds on social media for years to come.