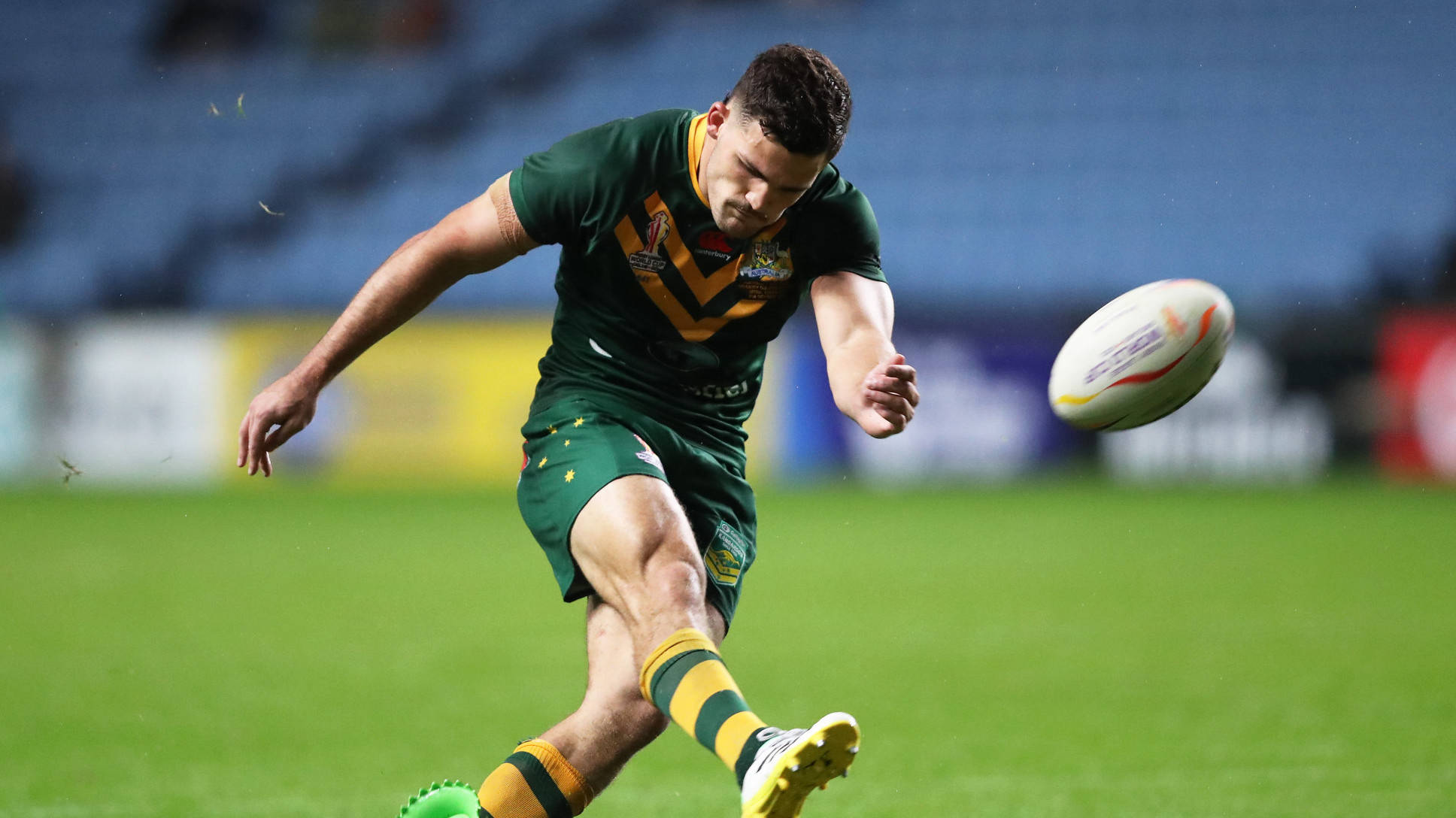 Cleary's battle with Daly Cherry-Evans for a starting slot is just one of the many selection dilemmas facing Meninga, whose all-star team ruthlessly put the Scotland’s Bravehearts to the sword with a 84-0 victory.

Within 30 minutes the Penrith Panthers star had a try and three assists, his 28-point display, which included 12 goals, moving him to the top of the tournament scoring charts.

"He feels part of the team now, he's in the dressing room talking and joking and he had a great game," said Meninga. "That's what we want from our key guys.

"It's hard to compare (Cherry-Evans' game against Fiji and Cleary's performance against Scotland). It was very different opposition and we're being really patient with that halfback decision."

Meninga admitted it was hard to find fault with his team's performance on a wet and windy night, as nine different players scored, with Josh Addo-Carr's four-try display the standout show, while Campbell Graham bagged a hat-trick on debut.

"That was our plan and how we wanted to play," he added.

"We showed improvement from the Fiji game and we excelled, I was so happy with that performance in defence and attack, there is nothing to criticise them about.

"Our ball control in those conditions, our kick game, our chase game, how hard we worked for each other, it was all great. We kept at it for 80 minutes. The attitude and mindset from everyone was really, really good.

"That's what happens when you've got such talented players. This is a new team and we are working really hard to create some history but it's early yet and we aren't getting too carried away."

Scottish coach Nathan Graham had hoped Campbell Graham would be part of his Bravehearts side, spending the last few years courting the South Sydney Rabbitohs' outside back.

However, the one-year pandemic delay to the tournament gave the 23-year-old a chance to earn a call-up to Meninga's squad - his Glaswegian-born dad and Coventry-raised mum watching in the stands with a gaggle of 'Aussies for the night' cousins, aunts and uncles.

"We've always known the situation with Campbell and if he wasn't getting in the Australia squad, he'd have been with us. As soon as he got picked I got on the blower and wished him well," said Graham.

"It's a bit nasty of him to score a hat-trick against us on debut though."

Graham and captain Dale Ferguson looked rather shell-shocked at this 15-try demolition job and must now find a way to rally their side ahead of a final group game with Fiji in Newcastle.

"They are the best players in the world and 75 percent of our players are part-time and it's a massive ask to step up to this standard," he added.

"They had twice as much ball as us and it was difficult going from the start. We competed at times but fitness level and skill wise, we were punished.

"Looking at that performance and their game against Fiji, Australia are looking really strong. I think England will be there and thereabouts but it's hard to see Australia not getting to the final with the calibre of player they've got in their squad."