Grand Final stars return for clash with Scotland in Coventry 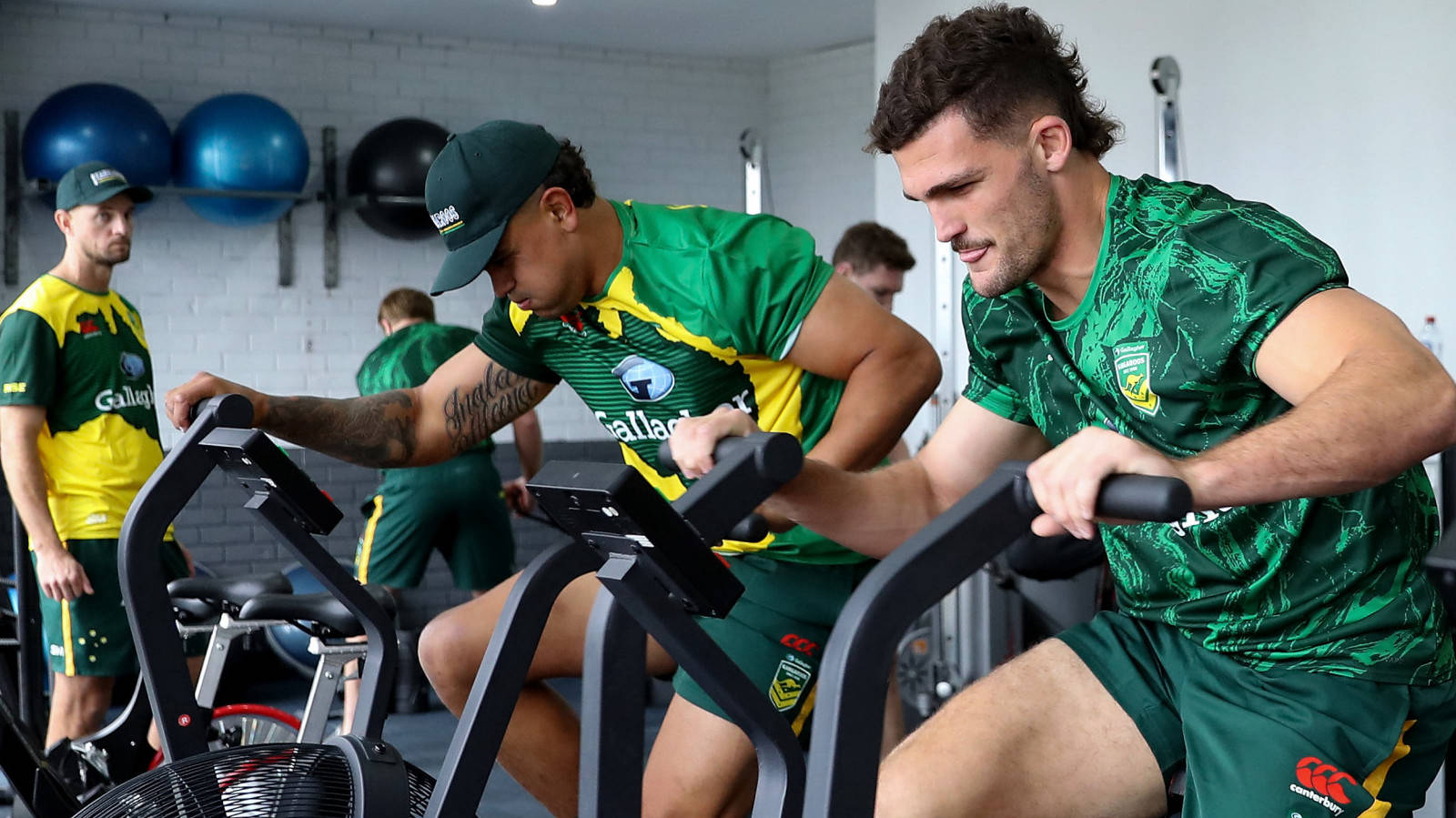 Grand Final stars return for clash with Scotland in Coventry

Mal Meninga doesn’t look too troubled considering he’s a man facing a long month trapped in the horns of a very pointy dilemma.

The Australian coach named a 24-man squad for the Kangaroos defence of their Rugby League World Cup title - and claimed only captain James Tedesco was safe in his starting line-up.

And it seems leaving Grand Final star man Dylan Edwards and Dally M Medalist Nicho Hynes at home was just the start of a five long weeks of sweating the hard decisions, because there is plenty more to keep him up at night ahead of Australia’s second Group B match against Scotland in Coventry.

Nathan Cleary replaces Daly Cherry-Evans in one of seven changes to the team that beat Fiji in Leeds, a side that includes his Panthers team-mates Isaah Yeo and Liam Martin.

Meninga has made no secret he is using group games to decide his team for the sudden-death stages and there is no greater debate than who will be his number one halfback.

Against the Bati, Cherry-Evans made 20 tackles but made two big errors to go with one linebreak assist and one try assist.

"There's some really tough decisions but that will be one of the toughest," said Meninga. "I've been clear that everyone is going to get an opportunity but it's not just about how they play, it's about how they train and work around the group.

“Nathan has had a great year from a club point and with Chez, his club has struggled but his Origin form was fantastic - he led the Queenslanders to success. Both have been great around the group and you can see they are leaders with great communication skills.

"Both are fully aware of the challenge in front of them and both are up for it. I know at some stage I'm going to be telling someone they are in and someone they are out but I will leave that to the very last moment."

READ MORE: What are the teams for Australia v Scotland men at the Rugby League World Cup?

Meanwhile Cleary is excited to partner up with Cameron Munster for the first time, the Melbourne Star five-eighth having been named the Cazoo Player of the Match in the opening fixture at Headingley.

"I’m just in awe of what he can do on the footy field," said Cleary. "We've played against each other in some pretty big games, so teaming up is something to look forward to. The way we both play, I think we could gel quite well and really exciting.

"Wearing the green and gold on this stage is something I've dreamt of doing since I was a little kid, I can't wait."

Scotland coach Nathan Graham admitted frustration after the Bravehearts opened their campaign with a 28-4 defeat to Italy in Newcastle.

They went in favourites but found themselves outclassed, as Azzurri winger Jake Maizen bagged a hat-trick.

Graham and Meninga certainly have very different squads at their disposal, the Scottish coach also has a different perspective on the word dilemma.

During the pandemic he worked shift after shift on the NHS frontline as an anaesthetist’s assistant at Bradford Royal Infirmary.

"When we got the draw some people said 'what a nightmare' but I couldn't wait for the Australians," said Graham,

"We were disappointed after Italy because it was a game we thought we should be winning with the personnel we've got. We didn't have long to dwell and if we can’t get up for this game, we don’t deserve to be here."