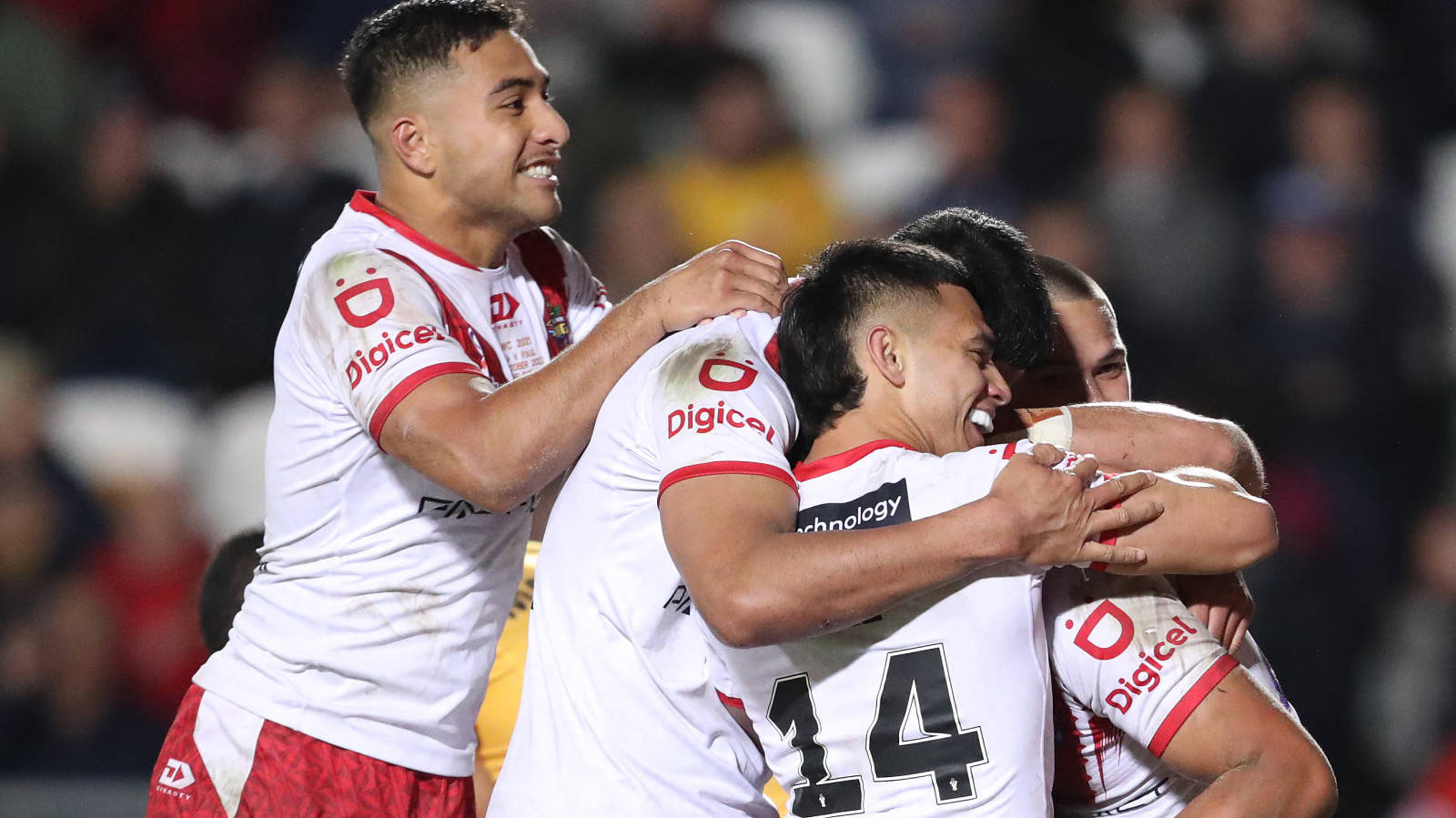 Keaon Koloamatangi’s try at the death shattered Papua New Guinean hearts and handed Tonga a 24-18 victory, their first ever over the Kumuls, in what was a thrilling start to the action in Group D.

In the most pulsating game of this World Cup so far, PNG went ahead through captain Rhyse Martin before Kristian Woolf’s Tonga shook off their early nerves to come roaring back into the contest.

Tries from Will Penisini, Isaiya Katoa and Moeaki Fotuaika put Tonga, without captain Jason Taumalolo due to suspension, ahead 18-6 at the break.

But Lachlan Lam dotted down for Papua New Guinea at the start of the second half to reduce the deficit before Dan Russell went over to tie things up at 18-18 and set up a nail-biting finish.

But Tonga, showing the grit and determination that saw them reach the semi-finals of this competition in 2017, somehow conjured up a late score through makeshift hooker Kolomatangi to snatch victory just two minutes from time.

Here we look at five things we learned from this enthralling encounter at St Helens’ Totally Wicked Stadium.

Kumuls skipper Rhyse Martin led by example out on the pitch for his side, bagging the opening try and kicking all three goals as he drew level with the world record of 41 successful kicks in a row, a mark currently held by Championship pair Jamie Ellis and Liam Finn.

The Leeds Rhinos second row has had a tumultuous year, losing his father Steve – whose heritage he represents by wearing the PNG shirt – at the start of 2022.

However, Martin returned from compassionate leave and took Super League by storm, helping to rejuvenate the Rhinos alongside new coach Rohan Smith as they made it all the way to the Grand Final before suffering defeat to St Helens.

Martin may not have swung the game in his side’s favour but his pinpoint and nerveless goalkicking, the highlight being a phenomenal touchline conversion to draw the sides level, could well prove vital if the Kumuls become embroiled in more cagey encounters in the latter stages.

Age is no barrier to success

Down under it is no secret that Tonga half-back Isaiya Katoa is the hottest schoolboy property on the market.

The 18-year-old was a highly thought of member of the Penrith Panthers youth system but after being poached by legendary coach Wayne Bennett will now bid to be the youngest starting No.7 in the NRL for 15 years at the Dolphins in 2023.

Despite being just a teenager, Katoa’s performance showed exactly why the old adage that if you’re good enough, you’re old enough rings true.

The precocious playmaker landed a 12-point haul and his 16th-minute try fired a warning to future opponents about what he can do with ball in hand. This will not be the last time you hear about him over the next month.

You must take your chances at this level

Both sides were guilty of spurning gilt-edged chances in this pulsating encounter.

However, it is Papua New Guinea who will bemoan the missed opportunities most after cruelly falling on the wrong side of the result.

Dan Russell looked to have scored in the corner until video referee Ben Thaler spotted a toe on the touchline.

In fairness to Russell, he is far more accustomed to patrolling further infield and Kumuls fans will have been cursing their luck that the prolific wideman Xavier Coates was ruled out through injury.

There were others who came close too but perhaps Kumuls coach Stanley Tepend will be most frustrated with Rodrick Tai’s disallowed score in the 53rd minute.

Tolu Kuala escaped punishment for what appeared to be a shoulder charge as he sent Tai careering into the corner flag with England legend James Graham seeing it as a score from the commentary box.

PNG are a force to be reckoned with

Papua New Guinea and rugby league have a special kind of association that other nations can only dream of.

After all, they are the only country in the world to claim the 13-a-side game as its national sport and the passion was evident throughout an inspired performance in St Helens, one that almost certainly didn’t deserve to come in a losing cause.

All going to plan, England will take on the Kumuls for a place in the World Cup semi-finals on November 5 in Wigan.

However, if that fixture does materialise – PNG should now qualify second behind Tonga in Group D and England are overwhelming favourites to top Group A after beating Samoa – then Shaun Wane will have to afford the hosts’ opponents every respect.

With classy Melbourne Storm centre Justin Olam in the ranks along with try-scoring phenomenon Alex Johnston at full-back, the NRL pedigree in the backs is obvious but the world’s number five side are blessed with talent throughout and will cause anyone problems.

Tonga at tip of the iceberg

Tonga may have only just snuck past PNG late on, but the Pacific Islanders will know there is plenty left in the tank as they bid to go one better than 2017 and make it all the way to the final at Old Trafford on November 19.

Kristian Woolf still has his old St Helens duo Konrad Hurrell and Will Hopoate to call upon when they return to fitness and skipper Jason Taumalolo will be back from suspension by the time the third group game against Cook Islands rolls around.

And with Gold Coast Titans superstar David Fifita used so sparingly off the bench by Woolf, only being introduced for the last 30 minutes, then it is easy to see why many will expect their performance level to keep on rising as the tournament progresses.

It was by no means perfect, but Tonga got the job done and that’s all that matters in the early stages with peaking at the right time pivotal at a World Cup.