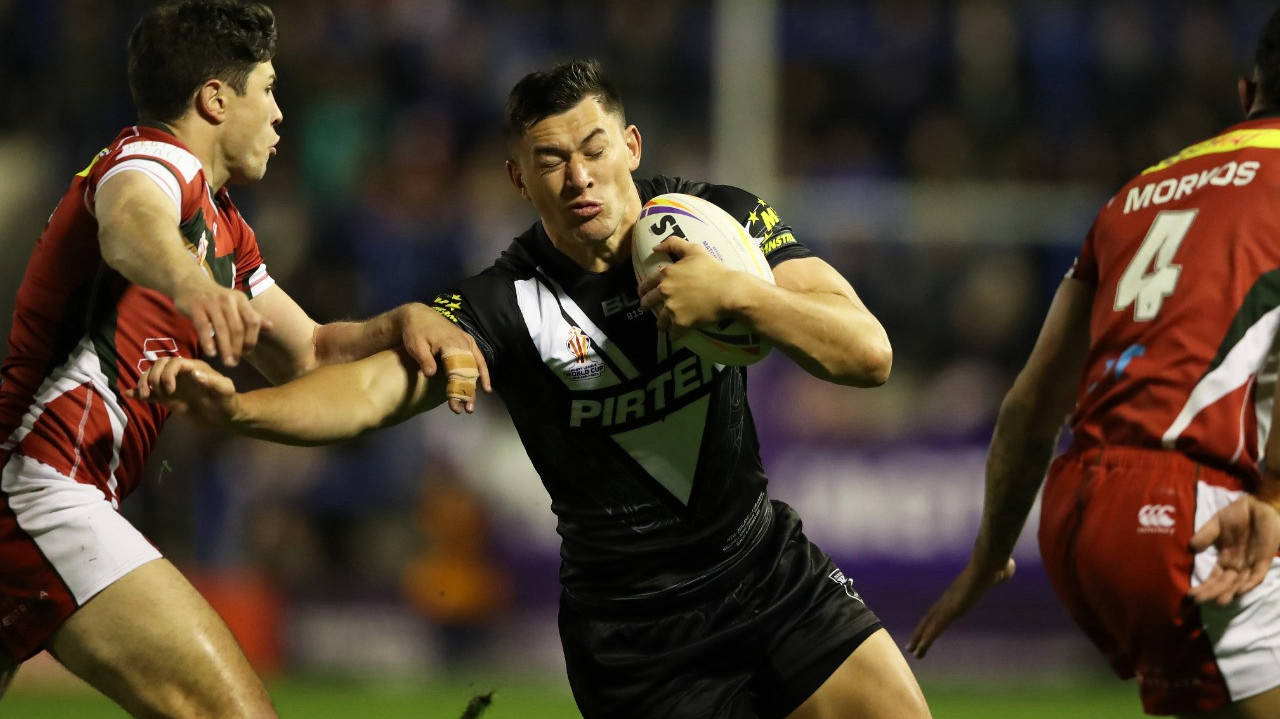 Like Australia on Saturday, New Zealand went behind to an early try and like the Kangaroos, the Kiwis quickly rebounded to start their Rugby League World Cup campaign with a win.

However, Lebanon showed plenty of spirit and promise in this 34-12 New Zealand win in Warrington, with Joey Manu inspiring the world number one side with a textbook fullback performance.

With 56 games to come it's a bit too premature to discuss the try of the tournament but Joey Manu could well have staked a claim.

Carving his way through the Cedars defence, the Sydney Roosters playmaker showed a full range of his footballing smarts. He brilliantly gathered his clever kick, juggled the ball from hand to hand, shrugged off a tackle and dotted down under the sticks.

Manu was the star of the show, clocking up metres gained, breaking tackles for fun and remaining equally resolute in defence.

Playing in the same NRL side as Australian captain James Tedesco means his opportunities to star at fullback are limited.

Kiwi coach Michael Maguire challenged him to prove a point at this World Cup and who ends the tournament as the world's best number one is now a seriously live debate.

Joey Manu is on fire!

Lebanon not here to make up the numbers

They lost that game 64-0 and have certainly come on a long way in the last two decades. Former Kangaroo Josh Mansour's early score, which came after they went short from the kick-off, underlined the flair and imagination which coach Michael Cheika wants to encourage.

He always said the key to this game was laying the foundation for the future challenges. Reading between the lines, he wanted to avoid a heavy defeat and seize some positives - two objectives conclusively delivered.

The Cedars' next game against Ireland at Leigh promises to decide who progresses to the last eight - and after the Wolfhounds' 48-2 win over Jamaica, it promises to be a too close to call cracker.

A solid start but no complacency for Maguire

Michael Maguire is the sort of coach that reads several plays ahead - so this game was always about laying the groundwork for the business end of the tournament.

Lebanon played with spirit but ran out of puff, in contrast the Kiwis were patchy but did enough. Maguire won't like numbers on handling errors and conceded penalties, though 57 broken tackles shows no lack of application.

It'll be interesting to see what he does with selections ahead of the game with Jamaica, the lowest ranked team in the tournament, and a big week lies ahead on the training field.

New Zealand left Jahrome Hughes (thigh) and Moses Leota (groin) out this match but Maguire revealed he expects both to be fit for next weekend.

Lebanon skipper Mitchell Moses made no secret he was using this World Cup campaign to forget about his NRL Grand Final disappointment. And playing angry seems to suit him.

The Parramatta Eels star looked composed in the halves, aced his kicking game and showed plenty of cut and thrust in attack.

And he was forming a strong partnership with Adam Doueihi before he was sent off after a verbal clash with officials, a red card that Cheika could certainly do without ahead of the match with Ireland.

Time management is everything for Michael Cheika, who is not only coaching Lebanon but Argentina's rugby union team for the upcoming Autumn Nations Series. Reach the last eight and he could be coaching the Cedars one day and the Pumas at Twickenham the next.

"Test footy is an addiction, no matter what code, you can’t get away from the thrill of the anthems, the crowd and what you can achieve when you are playing for your country," he said.