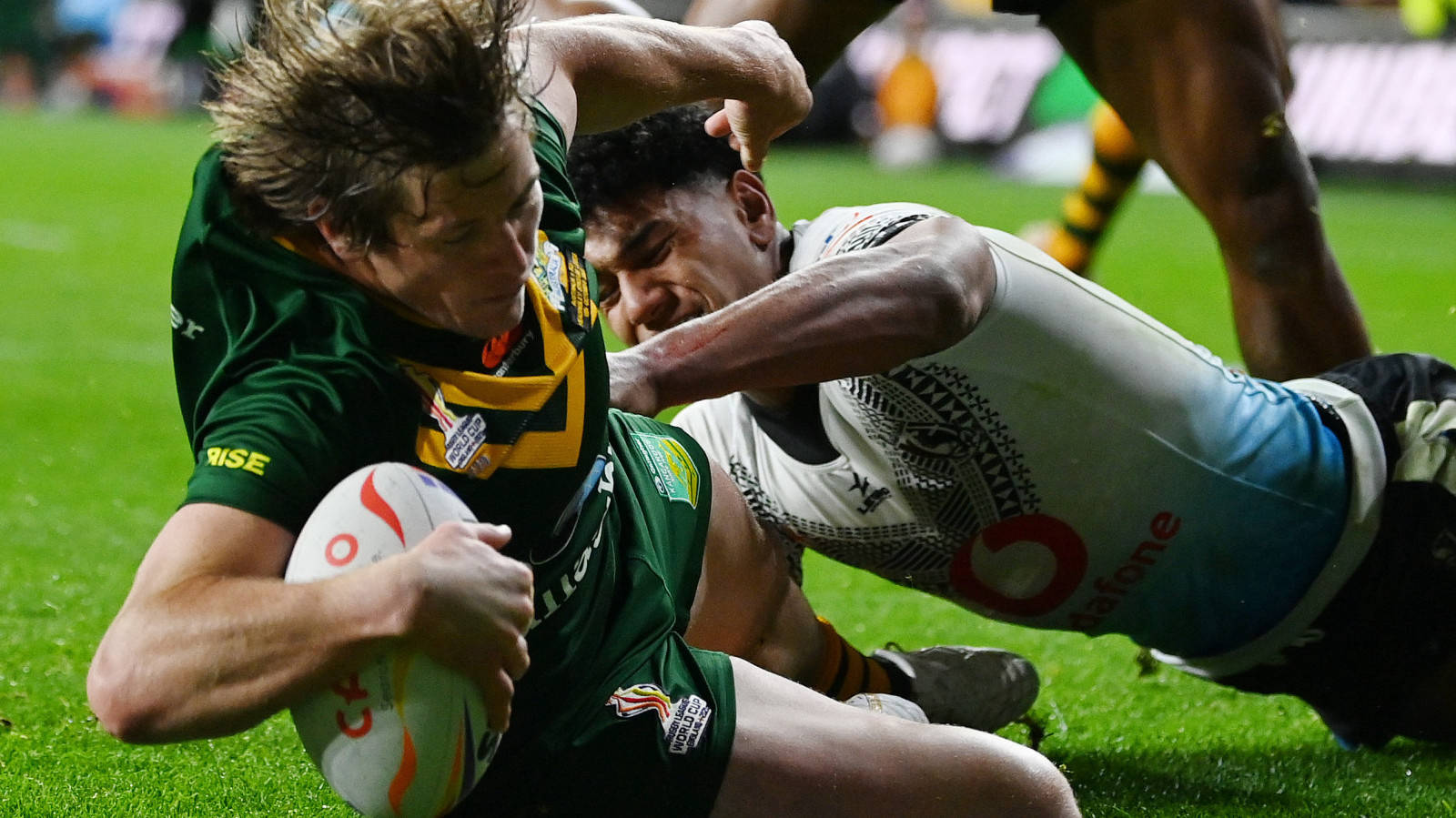 Cobwebs well and truly blown away, Australia are up and running as they seek their 12th Rugby League World Cup title.

Their 42-8 victory over Fiji had plenty of positives, Josh Addo-Carr's double helping put his State of Origin omission behind him, an impressive debut from Angus Crichton and showstopping displays by player of the match Cameron Munster and Harry Grant.

Overall, Australia were good - they only missed five tackles in the game - but not flawless, 15 errors is a stat they'll need to tidy up for tougher tests.

Munster's on the money

Worries that Australia would be rusty after a 1,000 plus day absence from the international stage were ruthlessly swatted aside.

Semi Valemei’s early try woke them from their slumber and a team littered with newcomers soon gelled, with the partnership of Latrell Mitchell and Cameron Munster on the left edge looking very ominous.

Munster's world-class performance simply lifted those around him, especially headline grabber Addo-Carr, showing why Melbourne Storm fans are delighted he has pledged his future to the club.

Just how good is Harry?

Harry Grant made quite the impression with his 46 minutes off the bench and could not have done more to push his case for more game time going forward as Mal Meninga uses him in tandem with Ben Hunt.

You could make a strong case that his second-half show was deserving of the player of the match prize - setting up Josh Addo-Carr's second try and scoring himself. His tackle count left Fiji's powerful side rocking on their heels.

The stats speak for themselves - 51 metres from seven runs, six tackle busts, two line breaks, a try assist and a try as well as 23 tackles, without a miss.

The Kangaroos squad is packed with talent, with coach Meninga resting his Grand Final players for this opening clash.

He has said only captain James Tedesco is safe in his starting team and competition for places is no more evident than at scrum-half with Penrith's Nathan Cleary waiting in the wings.

He watched from the sidelines as former skipper Daly Cherry-Evans auditioned for the half-back role but it seems likely Cleary will get his turn against Scotland in Coventry on Friday.

He didn't get on the board at Headingley but his flawless kicking was also a statement of intent. When games get tight at the business end of the tournament, Australia will be tougher to beat with the Cowboys back threading the posts with such ease.

Some encouragement for Fiji

Fiji have made the semi-finals at the last two Rugby League World Cups but this tournament was always going to be a challenge - especially with Tonga's rise up the rankings.

There were glimmers of hope for acting head coach Wise Kativerata, his side scoring the first and last tries of the night in Leeds, but they were eventually well beaten.

Games with Italy and Scotland will give them a chance to find their groove, teams without the pace and expressiveness of the powerful Kangaroos.

There was postive news on forwards Viliame Kikau and Tui Kamikamica who both passed their concussion tests and will be available for the match with Italy in Newcastle next Saturday.