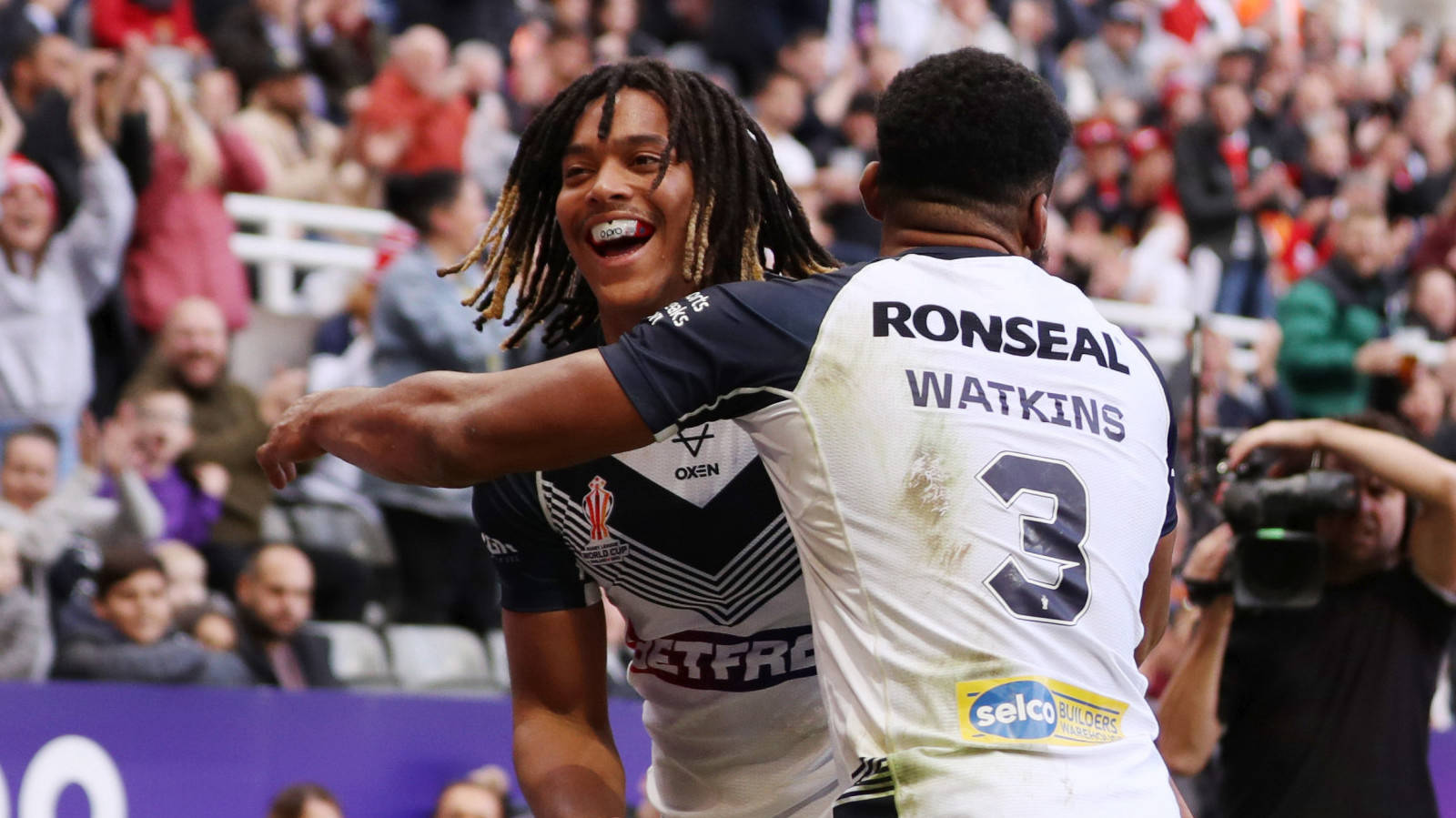 Jack Welsby scored the first try of the tournament and provided both assists for debutant winger Young to put the hosts 18-6 up at half-time.

Loose forward and player of the match Victor Radley was immense in the middle on his first England appearance as Samoa struggled to get their star-studded attack going in front of 43,119 spectators at St James’ Park with their only points coming via Izack Tago’s first-half interception.

Jack Welsby scores the first try of RLWC2021 and England extend their lead.

England started quickly and the first sight of 6ft 7in Young brought them an early repeat set and, although Farnworth failed to ground Williams’ grubber, Makinson kicked the hosts into a 2-0 lead after Whitehead was impeded by Anthony Milford.

Shaun Wane’s side thought they had scored the first try when the onrushing Tom Burgess stretched for the line, but he lost control of the ball at the last second.

They soon did get over and in sensational style too as captain Sam Tomkins injected some pace from inside his own half before popping to Williams, whose hard line burst through the Samoa defence with Welsby on hand to apply the finish.

A minute later and England were in again as half-back Welsby’s cut-out ball found Young and he danced inside the despairing Samoa full-back Joseph Suaalii to storm home for a sensational 40-metre score.

The magic continued on England’s right edge as the two 21-year-olds combined again, Welsby – who was by now full of confidence – floated another ball out to his winger who dived into the corner to make it 18-0.

However, just when it looked like Welsby could do no wrong, his next miss pass was intercepted by centre Tago, who raced away to give Samoa a foothold in the game, Stephen Crichton’s conversion reducing the deficit to 12.

That sparked the Pacific Islanders into action as their offload game came to the fore, Suaalii coming close before Crichton failed to apply downward pressure to Milford’s kick on the stroke of half-time.

The second half began with a lengthy delay while Tyrone May was forced off on a stretcher with a leg injury and it was England who seized the advantage afterwards.

Mike Cooper’s offload hit Williams’ shin and fell kindly for the No.7 to take England down field before they found more success on the right, this time centre Watkins running over untouched.

Samoa’s hopes were dented further when Milford was sent to the sin-bin for a late hit on Tomkins and Makinson's penalty went in off the post to establish a 20-point cushion inside the final quarter.

England took full advantage of their man advantage as Brisbane Bronco Farnworth scooped up the loose ball and dotted down before Whitehead barged over to put the result beyond doubt.

Whitehead added a second following Makinson’s break down field and the latter got one of his own after collecting Williams’ grubber in the corner, before bringing up England’s half-century with a touchline conversion.

There was still time for Williams and Burgess to add even more gloss to the scoreline as England made a huge statement by racking up 60 points in their first Group A encounter.