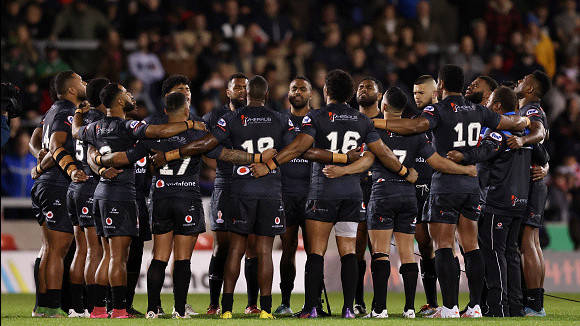 Despite the injuries and despite the stress, Wise Kativerata has confirmed that his side will still bring Fijian flair against Australia tomorrow.

Kativerata has taken over the head coach role from Joe Dakuitoga who has stepped down due to a leg injury hours before Fiji begin their World Cup campaign at Headingley Stadium.

Fiji will be without Mikaele Ravalawa, Joseph Ratuvakacereivalu, Kaylen Miller and Pio Seci as the World Cup gets underway.

And following their 50-0 defeat to England during a warm-up match last week, Kativerata has faith that NRL superstars Viliame Kikau and Apisai Koroisau can help pioneer their team's unique playing style.

He said: "We've got four boys unavailable and only two replacements so that's the only way.

"But apart from that, we're not going to let anything bring us down, these boys are playing professionally.

Joe has an infection on his leg so I'm stepping up to do his role. Luckily enough we have Brian McDermott who has experience in the England Super League to help us a little bit.

"After the game against England, we have the likes of Kikau and Api who bring different dimensions in the squad. They bring high energy and more experience.

What are the teams for Australia v Fiji men?

"Fiji style is different to any other style, so we like to take the opportunity and run and go with the players.

"We don't have the size at the front to go through them but we have players like Kevin Naiqama who can create something out of nothing and just play.

"Most of these boys play in Australia anyway, we're going to play it our way and focus on ourselves.

"If you play to our ability then we will give them a good go tomorrow."

Fiji have reached the semi-final stages of the Rugby League World Cup in their last three appearances with hopes of finally breaking their curse and reaching the final this time round.

But Kativerata wants his team to shut out the potential pot of gold at the end and instead remember the journey they have been on to reach this stage.

And with the beats blaring and laughter echoing around Headingley during the captain's run, the players were full of pride in representing their nation.

Kativerata said: "Most of these players are born in Fiji and I recruit them, unlike a lot of the Tongan and Samoan who are born in New Zealand and Australia.

"So we come from nowhere, they learn rugby league at the ages of 19 and 20 and now three years in the semi-finals, we know what we can do. So the players have got to believe in themselves.

"I've been reminding them, don't ever forget where you came from, because these kids were running around in a village.

"And now everybody in the world knows who they are. You look back eight years ago they were nothing and now we're at the heart of rugby league."