The 11-time champions begin their campaign against Fiji on Saturday 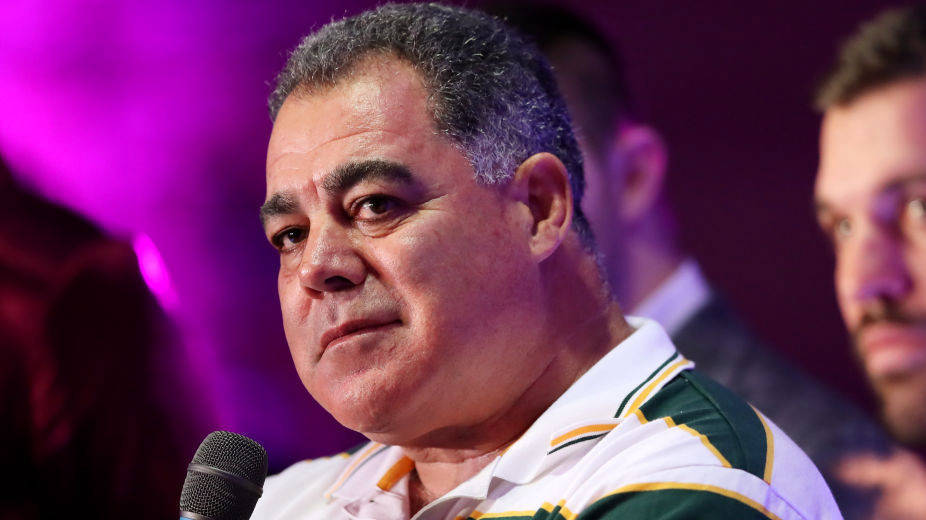 The 11-time champions begin their campaign against Fiji on Saturday

Mal Meninga has a twin mission at the Rugby League World Cup - winning again and growing the game.

Australia's legendary coach knows the expectations that come with any Kangaroos campaign. The 11-time champions have won their last 12 matches at the tournament and three group wins would set a new record.

Ahead of their opening game against Fiji in Leeds on Saturday, Meninga spoke passionately about his players owning their legacy, while also playing their part in giving international footy a much-needed boost.

The global game was severely hit by the pandemic, tours were scrapped and the World Cup delayed by 12 months.

This year's tournament is billed as the widest open yet, with perennial contenders Australia, New Zealand and England facing powerhouse teams from Tonga and Samoa packed with show stopping NRL talent.

And it's a challenge Meninga - a long-time passionate advocate of the international game - welcomes, even if there are plenty of names he wanted in green and gold running out in jerseys of their heritage nations.

"The new frontier for our sport is the international game," said Meninga. "We've nearly exhausted everything at home so we've got to find a new space.

"Because of what's been happening in the world our international teams have become a distant memory and that has to change.

"The leaders of our sport couldn't be more excited about this World Cup and what it could do for rugby league.

"We need the international game to expand, we need more competitive games, that is a part of the legacy we want to be part of.

"I’m really happy with how we handled eligibility. I encouraged players to make their mind up with who they wanted to play for, what nation they were passionate about. I told them 'go with your heart'.

Meninga has 13 international newcomers in his squad, though only one hasn't experienced the red-hot furnace of State of Origin footy.

Captain James Tedesco has been working hard to forge a squad spirit for a team that hasn't played in over 1,000 days - with rounds of golf and coffee runs punctuating training at the team's Manchester HQ.

Expectation comes with the territory, despite Australia's world number four ranking, a position caveated by the fact the Kangaroos have only played four games since lifting the Paul Barrière Trophy five years ago.

"We’ve handled pressure and expectation for a long, long time. You accept it, you carry it on your shoulders and you prepare accordingly," added Meninga.

"You do that with great humility and the way we prepare, we need to make sure we do everything we possibly can to not get in front of ourselves.

“We’re not an arrogant footy team. There’s no place to be arrogant. We’re a confident team and I believe that with confidence, keeping your feet on the ground and head out of the clouds and working hard, we’ll head toward success.

"I think understanding your past is very important to moving forward in your future. It’s great to talk about our old stories and how we position ourselves and how we want to play in this tournament, what we want to do to be successful.

"I think we’ve planted some really good seeds early. The guys are excited about being here. They’re all on board, all want to put on the green and gold jersey and all want to play to their potential.

“We’ve got great competition within our ranks, players trying really hard to make sure they’re there at the back end of the tournament.

"We want to create our own legacy piece."