What are the teams for Australia v Fiji men at the Rugby League World Cup? 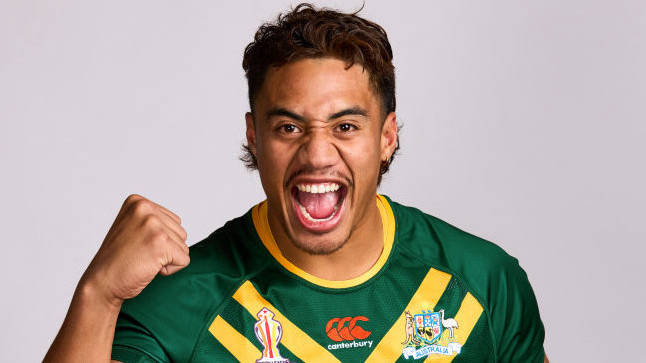 What are the teams for Australia v Fiji men at the Rugby League World Cup?

Australia coach Mal Meninga has named seven Kangaroos debutants in the side that will open their Rugby League World Cup title defence against Fiji in Leeds.

Murray Taulagi, Tino Fa'asuamaleaui, Angus Crichton and Jeremiah Nanai will all start while Harry Grant, Reuben Cotter and Pat Carrigan are named on the bench. Penrith's NRL grand final heroes Nathan Cleary, Isaah Yeo and Liam Martin have all been given extra time to recover.

Fiji’s coaching team have given no such luxury to their players with victorious Panthers duo Api Koroisau and Viliame Kikau been named alongside Parramatta’s Maika Sivo. Sunia Turuva, one of the brightest young talents in the game, will wear the number one jersey.

READ MORE: Naiqama - Fiji must keep it simple against Australia

Australia have won their last 12 men’s Rugby League World Cup matches and victories in their opening two fixtures of this year’s tournament would see them equal the longest winning run by any men’s team in the competition’s history, set by the Kangaroos between 1995 and 2008.

Australia have played six matches against Fiji and have never lost. Their biggest win was a 66-0 success in their first-ever clash at the 1995 Rugby League World Cup in Huddersfield. Their most recent match was a 54-6 victory in Brisbane at the final four stage of the last World Cup.

Eleven-time winners Australia are ranked fourth in the world, though haven't played an international match in 1,078 days - a defeat to Tonga in Auckland.

Fiji made their Rugby League World Cup debut in 1995 and have reached the semi-final stage at the last three editions.

They are ranked sixth in the world and lost their last international game, a 50-0 defeat to hosts England in a warm-up match in Salford, a third straight international defeat.