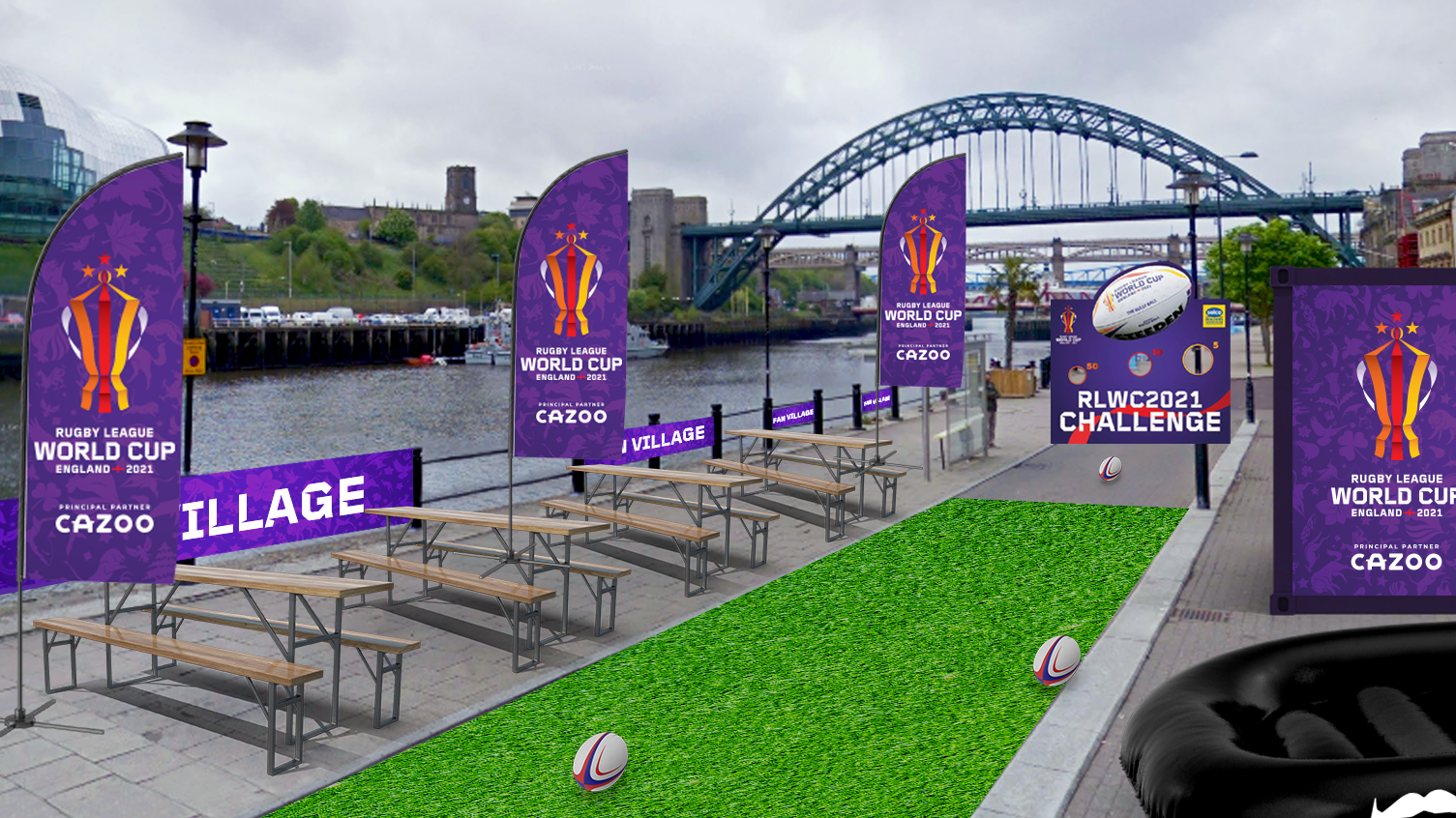 With two months to go until the opening fixture of Rugby League World Cup 2021 at St Jamesâ€™ Park, organisers have today released further details of what fans can look forward to in Newcastle.

Taking place on both Friday 14th and Saturday 15th October, fans and residents can expect a carnival atmosphere with the Official RLWC2021 Fan Village being set up on Newcastle Quayside.

Running from underneath the Tyne Bridge, through to the Gateshead Millennium Bridge, the RLWC2021 Fan Village will have a range of family-friendly activities, food and drink stalls, activations from RLWC2021 partners, music and big screens, plus a fireworks display on Saturday evening to complete the festivities.

The opening fixture for the Rugby League World Cup will be played between England men and Samoa men at St Jamesâ€™ Park, with organisers recently revealing that the fixture is on course to sell-out.

With Scotland v Italy in the menâ€™s tournament at Kingston Park on Sunday 16th October, plus a rugby league festival involving over 200 teams, it is set to be a big opening weekend for the tournament in Newcastle. The city will enjoy a significant economic boost with tens of thousands of fans attending from all over the UK and across the globe.

The Official RLWC2021 Fan Village will begin on the afternoon of Friday 14th October and will be open between 1000 and 2230 on Saturday 15th October. More information about the full programme will be revealed closer to the tournament.

â€œWe know from previous rugby events that have been hosted in Newcastle, that the Quayside is the perfect place for fans to enjoy the big match atmosphere. With St Jamesâ€™ Park a short walk away, the Fan Village will be a great place for the build up to the opening match of the tournament as well as post game in the evening.

â€œThe excitement is really building now as we get closer to first game and the plans for the RLWC2021 Fan Village only add to that anticipation. There will be something for everyone in the Fan Village and we look forward to welcoming rugby league fans and those without match tickets to the Quayside."

â€œThe Quayside has hosted fan villages for previous major sporting events with incredible success, most recently during the European Rugby Cup finals in 2019.

â€œJust as it was then, Iâ€™m sure it will be a fantastic atmosphere at the Fan Village as Newcastle prepares to launch the Rugby League World Cup. There will be something for everyone and Iâ€™d encourage people to head down and join in the fun.â€

â€œWeâ€™re really looking forward to welcoming fans from all over the world, to experience some fantastic sport, but also enjoy our famed Geordie welcome. Itâ€™s going to be a phenomenal atmosphere across the city as we host the opening ceremony and first game of the tournament, and the Fan Village will be a fantastic place to feel part of the celebrations.

â€œThe economic impact of an event such as this is huge for Newcastle, with visitors to previous major Rugby tournaments in 2019 delivering a boost to the cityâ€™s economy of Â£24.6m including Â£16m worth of direct expenditure. The reputational legacy for the destination on the back of such events is also incredibly important for the city, and we have been working closely with all our partners to ensure we create lasting memories for fans visiting the city, and the Fan Village, during the Rugby League World Cup.â€

â€œWe canâ€™t wait to welcome the Rugby League World Cup and its supporters from all over the world. It is a huge accolade for the city to be hosting the opening ceremony and the first game of the tournament and we know Newcastle, its businesses, and its people will help make the event a resounding success. The eyes of the world will be on Newcastle, and hosting events of this scale and calibre delivers huge economic benefits to the city.

â€œNewcastle knows how to stage a great party and the iconic Quayside is the ideal place to host the celebrations and provide the backdrop for the Fan Village. The tournament will be an amazing opportunity to showcase the city to a worldwide audience and demonstrate and build on the cityâ€™s reputation as a world-class venue for international sporting events and fixtures.â€

Secure your place at fixtures in Newcastle - including England v Samoa at St James' Park - to join the opening weekend celebrations at rlwc2021.com/tickets