Behind the Line: Paul McShane

Behind the Line: Paul McShane

At one stage of his career, Paul McShane would tell you that he wondered if his next professional Rugby League contract would come to fruition. Now, in 2021, after making his senior international debut with England, he stands on the cusp of securing a place in the squad for RLWC2021.

Growing up in Belle Isle in South Leeds, McShane was never far away from a rugby club. Aged six, he was encouraged by family members to 'burn off some of that energy' representing Hunslet Parkside, the club whose home playing field backed onto his house.

His Rugby League talents shone through at a young age. Picked up by Leeds Rhinos at age 12, McShane progressed through the academy and gained his first taste of international Rugby League action in 2008 after being named in the England U18 Academy squad to tour Australia.

"It caught me by surprise," McShane explains. "I hadn't been involved in anything like that before - I hadn't actually been on a plane - now I was travelling to the other side of the world to play for England. I think that shocked me."
"When I got out there, It didn't quite hit me how special it was," McShane continues. "As a young kid, I played rugby because I loved playing rugby."

After signing his first professional contract with the Rhinos shortly after returning from the tour of Australia, McShane made his debut for the club on the opening day of the Super League season in 2009.

Separated by loan spells at Hull FC, Widnes Vikings and Hunslet Hawks, McShane's time at the Headingley based club ended in 2013, as he left the Rhinos to join fellow Yorkshire side Wakefield Wildcats.

It would, however, be McShane’s next move that would prove pivotal in his career. In 2015, the gifted hooker joined the club that he now calls home, Castleford Tigers, and linked up with his current boss, Daryl Powell. A man he credits for revitalising his career.

"Since I've joined the club, he's always seen improvement in me," McShane states. "Even after 2017 and 2018, when I thought I hit my peak, he sat down with me at the end of the season and told me that 'there's another 10% in you, we need to get you in that international setup.'"

After integrating into the Castleford squad, he became an ever-present and fan favourite at the club. In 2017, McShane played a significant role in the Tigers' journey to a maiden Grand Final appearance.
Following such an impressive season, many tipped McShane to make the England squad for the RLWC2017 campaign. Unfortunately, the call never transpired.

"At the end of 2017, I thought I had a crack at making the World Cup squad. But, I didn't, I thought 'that's me done now, I've got no chance ever to make it," McShane recalls. "But having Powelley there," he continues. "He has seen improvement in me, which and as a player, it's what you want from your coach.”

Sure enough, after dominating the club's end-of-season awards in 2018 and earning the coveted Steve Prescott Man of Steel award in 2020, the 31-year-old has proven that he belongs at the very highest level, gaining his first senior international call-up on the eve of RLWC2021. His delight is there for all to see.

"The full week of training, I absolutely loved it. Going into camp with the players that we have got, the standards were outstanding." McShane recounts. "Finally getting out there on Friday night, I'll never forget it. Obviously, the result wasn't ideal, but just getting out there and being able to represent my country, it was massive."

Although blessed with talent in his position, McShane is confident that he can secure his place in the England squad for the end-of-year World Cup.

The English were just edged out on their return to action against a tough Combined Nations All-Stars side. McShane, however, remains unperturbed as he is sure that there's so much more to come from this England side.

"When we reviewed the game, there were signs there that we could be whatever we wanted to be," McShane states. "Add in the players that missed out, not only good players, but probably some of the best players in our competition - plus those playing over in Australia - it's exciting."

As the English do their nation proud at Euro 2020, McShane is adamant that he and his England teammates will give fans more reason to celebrate by lifting the World Cup trophy later this year.

"You want to do it for them. I think it shows with the football, how well the lads have done, the country gets behind you," McShane describes. "For us to do that on home soil, especially after everything that people have been through, it would be special," he says. "The aim is to win it. It's a simple as that."

At RLWC2021, England will take on Samoa at Newcastle's St James' Park, France at the University of Bolton Stadium and Greece at Bramall Lane in Sheffield. Though McShane is expecting tough, passionate opposition sides, he is excited by the challenge that lies ahead.

"We're gonna leave it all out there," McShane declares. "The atmosphere at St James' Park is electric," he continues. "With Bolton and Sheffield, I think it will be the same. We're a passionate country, and we have loyal fans that support us well," he says. "All three [games] will be dominated by English fans that are going to be supporting us and pushing us on to win."

Don't miss your chance to see Paul and his England teammates in action at RLWC2021. Visit www.rlwc2021.com/tickets to buy tickets, hospitality experiences and travel packages. 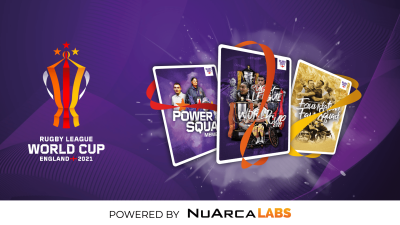 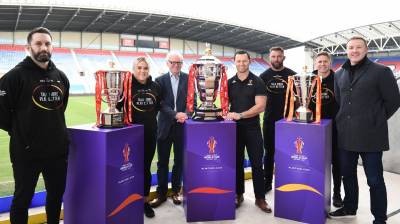