Almost Â£15,000 has been granted to four referees societies across the country as part of RLWC2021's CreatedBy capital grants programme. 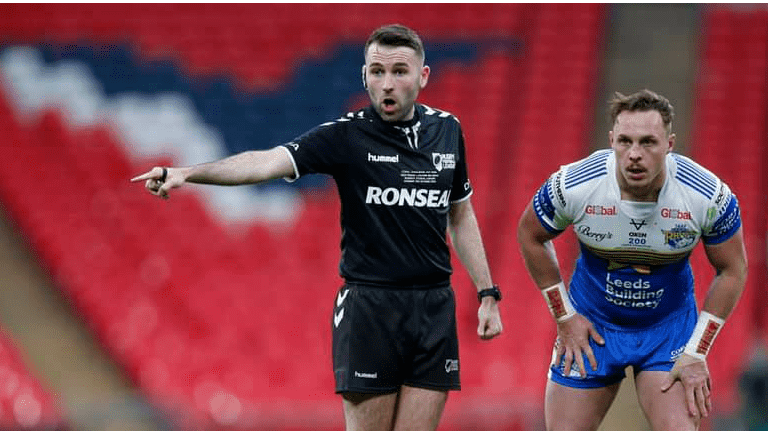 Almost Â£15,000 has been granted to four referees societies across the country as part of RLWC2021's CreatedBy capital grants programme.

And three of the gameâ€™s leading whistlers â€“ Liam Moore, Caitlin Beevers and Matt Ball â€“ believe that will be a huge boost in increasing the quantity and quality of match officials for years to come.

The four societies â€“ Barrow and District in Cumbria, Leeds representing West Yorkshire, Wigan for Lancashire and Cheshire, and the Southern Rugby League Referees Society also encompassing the Midlands â€“ will use the funds to invest in equipment for their Match Officials Centres, with the aim of increasing participation and raising the standard of officiating throughout the game.

â€œWeâ€™ve already seen huge investment in community clubs and facilities through the CreatedBy programme, and itâ€™s great that the importance of Match Officials has also been recognised in this way,â€ said Moore, a member of the RFLâ€™s Full-Time Match Officials squad who made history at Wembley last October as the youngest ever referee for a Challenge Cup Final aged 25 â€“ and was recently appointed to the International Rugby Leagueâ€™s Elite Match Officials Panel preparing for the World Cups in England this autumn.

â€œDespite the huge additional challenges and delays resulting from Covid-19, all the societies have worked together in their application, which has made it a really valuable process.

â€œFrom Barrow and Cumbria to the Midlands and the South, these funds will allow investment in new equipment and technology, which will in turn lead to the development of new officials on to the pathway.

â€œAnd that can only strengthen the pathway, which provides a link from taking charge of your first game to Super League and international level.â€

Caitlin Beevers was a double Challenge Cup and Super League winner with Leeds Rhinos in 2019, but the full-back is also a highly-promising match official.

â€œWe all know that match officials are crucial to Rugby League, but I also want people to know the benefits of being a referee,â€ said the 20-year-old. â€œIt builds your character, it looks good on your CV, and itâ€™s a great piece of life to be involved in.â€

Matt Ball was the Wheelchair Rugby League Referee of the Year in 2019, and like Caitlin and Liam, he is also hoping to be involved in the World Cups this autumn. â€œItâ€™s all about recruitment and retention,â€ he said of the CreatedBy funding. â€œDo people know how to get into refereeing? But itâ€™s also important to provide mentoring and support. Thatâ€™s going to mean more match officials available through the community game, and that means better standards across the board.

â€œJust give it a go,â€ added Matt, who is from Leigh. â€œThe physical and mental side of refereeing does push you to achieve things you didnâ€™t think were possible.â€

CreatedBy is the RLWC2021 Capital Grants Programme. The programme is dedicated to improving the environments where Rugby League takes place; giving people more and better opportunities to engage with the game and to get active.